For an extended period now, U.S. farms have enjoyed an abundance of workers from Mexico who work for stable or decreasing real wages. However, since 2008 the overall number of these farm workers, both these working in the U.S. and those who remain in Mexico, has shrunk substantially.

A recent study by Center for Poverty Research Faculty Affiliate J. Edward Taylor and Graduate Fellow Diane Charlton finds that this downward trend is a consequence of long-term structural changes in the supply of Mexican labor. This has far-reaching implications not only for the competitiveness of U.S. farms but also for poverty in Mexico and rural America.

Farmer complaints about labor shortages are increasing. The US Department of Labor’s National Agricultural Worker Survey confirms a sharp decline in the share of newcomers among foreign-born workers. Border enforcement and drug-related border violence may deter migrants, but this study suggests that for U.S. farms these only reinforce a negative trend in rural Mexicans’ willingness to do hired farm work both in the U.S. and in Mexico. If this is correct, the obvious policy implication is that immigration reform will not solve U.S. farm labor shortages in the long- or even short-term.

This shift in labor from farm to non-farm work within Mexico is consistent with global trends: as incomes have risen, the share of workers in agriculture has decreased. In Mexico, economic growth has increased demand for both farm and nonfarm workers, while education and demographics have cut the overall number of unskilled workers in rural Mexico. This decline, combined with competition from farms in Mexico, raises the minimum wage needed to induce new workers northward seeking jobs on U.S. farms.

These issues raise questions of how U.S. farmers will adjust to a much less plentiful farm labor supply. Perceived labor shortages and rising real farm wages create incentives to change both crop choices and production and management methods which are prerequisites for the higher wages that would enable farm worker families to live above the poverty line. 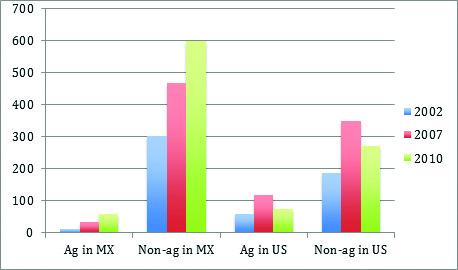 Migration and Worker Data
This study examines shifts in Mexico’s migrant labor force over time using panel data from the Mexico National Rural Household Survey (ENHRUM). ENHRUM is unique in providing both retrospective and panel data on migration to both the United States and to destinations within Mexico.

The panel data for this study come from three survey rounds: 2003, 2008 and 2011. Each round collected information on migration destinations, whether migrants worked in agricultural or non-agricultural sectors, and employment status (wage earner or self-employed) for all family members. The final two survey rounds of data made it possible to compare migration patterns before and after the onset of the 2008 economic recession.

A Shift Away from Farming
Between 2008-09, employment in non-farm sectors of the U.S. economy in which Mexican immigrant workers concentrate, particularly in housing construction, decreased sharply without reducing demand for farm labor. In that time, the number of U.S. farming jobs held steady at between 2.1 to 2.3 million.

Changes within Mexico
This study finds that rather than a temporary response to the U.S. economic recession, this decline in rural farm workers from Mexico is the consequence of long-term structural changes in the supply of Mexican labor. According to ENHRUM data, the number of people leaving rural Mexico to find work abroad increased between 2002-07. However, 2007-10 saw a sharp decrease in those numbers. During that period many who had previously worked in the U.S. found work within Mexico instead.

While the overall number of rural Mexicans migrating within Mexico for farm jobs has grown, the combined shares of the workforce doing farm work in either Mexico or the U.S. decreased from 2007-10. By contrast, the percentage of Mexico’s rural workforce migrating internally to non-farm work grew steadily. Even with a larger workforce overall, today fewer and fewer rural Mexicans are working in agriculture.

Responses
As household and community regional networks increasingly lead to non-farm jobs both domestically and abroad, the overall farm labor supply continues to diminish. Consequently, the shift this study has identified likely represents a continued downward trend in the number ofMexico-to-U.S. farm migrants in coming years.

In the past, U.S. agriculture has relied on seeking out new supplies of farm labor to relieve shortages and to limit increases in farming wages. Since the days of the Bracero Program (1942-64), immigration policy has facilitated farmers’ access to foreign workers, who in the past half-century have overwhelmingly come from rural Mexico. However, there are limits to the effectiveness of immigration policy in an era when the number of available farm workers is in decline.

In the resources world, the alternative to exploration and development is conservation. The same is true for farm labor. Farm labor conservation involves shifting to less labor intensive crops and increasing worker productivity through mechanization and improved management. Both of these would keep down the costs of farming, and would provide a level of wages that would enable farm workers and their families to live above the poverty line.

Around the globe, a growing number of countries are turning to immigration as a source of farm labor even as agriculture’s share of employment is falling. Immigrant farmworkers from Mexico are unquestionably one of the most critical inputs to U.S. agriculture; their availability affects production technologies and enhances the ability of U.S. producers to compete with low-cost producers abroad. Researchers analyze the sustainability of an agricultural system that depends on foreign sources of labor, and highlight the importance of labor productivity-enhancing technological change. 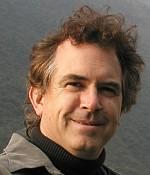 J. Edward Taylor received his degree in Agricultural and Resource Economics from UC Berkeley in 1984. His research interests include economic development, immigration, and rural poverty.