With obesity affecting over a third of the U.S. population,  public health advocates—including first lady Michelle Obama—have called to “drink up” on water instead of sugary beverages. In new work, supported by the Center for Poverty Research, we find that low-quality drinking water is a potential barrier to reducing the consumption of sugar-sweetened beverages in high-poverty rural immigrant communities.

The prevalence of obesity and Type 2 diabetes in California is higher among low-income minority populations than white affluent populations. A combination of environmental factors, including a lack of access to healthy foods and nutrition education[1]—and safe drinking water—likely contribute to these disparities.

To understand these challenges in agricultural immigrant communities, we are investigating the health of participants in the Niños Sanos, Familia Sana (Healthy Children, Healthy Family) program, as well as the water systems serving them.

We examined child health in two low-income rural towns in California’s Central Valley. These communities represent a population of Latino agricultural workers who have been historically underserved. The program, a partnership between UC Davis and these towns, targets Mexican-origin children ages 3-8 and their families to integrate nutrition, physical activity, economic and art interventions to create healthier communities.

We identified public water systems in these communities with the California Department of Public Health (CDPH) Drinking Water Systems Geographic Reporting Tool. We assessed water quality by the frequency of violations  reported by EPA EnviroFacts, and contaminant-level data from the CDPH Water Quality Monitoring Database. Interviews with 27 mothers in the study  determined tap water use and perceptions of water quality.

Based on parent reporting, at least 38.5 percent of children aged 3-8 years drank SSBs[4]  more than 2-3 times per week. These children may drink SSBs so frequently in part because of a real or perceived lack of safe drinking water.

Two state-regulated water systems serve the majority of people in these communities. The remaining rely on at least 11 small public or private water systems, which may be regulated directly by the state, locally by county regulators, or may lack any regulation at all. Most of the current water quality problems affect these smaller systems.

Each of these 13 systems has had monitoring violations in the last 12 years. Two have had reporting violations, indicating that they either did not test for contaminants or did not report findings to those they serve.

All 27 mothers interviewed reported avoiding drinking tap water, citing its unpleasant taste, dirty or yellow appearance, excessive iron and/or general contamination. These comments are consistent with high mineral content in samples from the largest water system serving this community. These minerals—manganese and iron—are considered secondary contaminants and do not have enforceable limits set by the EPA.

Apart from contributing to negative perceptions, the World Health Organization (WHO) has set health benchmarks for manganese that these samples exceeded. The neurotoxic effects of manganese and arsenic at chronic low-level exposures warrant further investigation.

Most of these women reported relying instead on purchased and, to a lesser extent, home-filtered water for drinking and cooking. This additional cost represents an extra burden.

Safe tap water should be assured for all communities. Disadvantaged communities, like those in this study, have limited means to purchase water from alternative sources and also cannot improve and maintain their water treatment systems. Increased state funds to agencies already working to identify who is at risk would bring more small water systems into compliance.

To improve information about unregulated systems, subsidies for home water filters and/or testing costs could be offered to private well owners in exchange for testing reports. In addition, outreach efforts should be expanded to target private systems in known problem areas, especially those that are severely disadvantaged.

Removing primary contaminants may not matter if perceptions and drinkability are not improved. Reduced secondary contaminants could increase confidence in the public water supply.

These improvements must also be clearly communicated. A simple step could be to require water system operators to send clear water quality reports not only to property owners, who currently receive them, but also to renters in their preferred language to provide clear and interpretable information to affected residents. Social marketing campaigns would also create greater awareness of these issues and strategies to improve water safety.

Caitlin French is a Ph.D. student in Nutritional Biology at UC Davis.

Lucia Kaiser is a Cooperative Extension nutrition specialist and registered dietitian. She earned her M.S. and Ph.D. in the Department of Nutrition at UC Davis.

Rosa Gomez-Camacho is a post-doctoral fellow at the Center for Transnational Health at UC Davis.

Cathi Lamp is a nutrition advisor in Tulare and Kings Counties who works on community solutions to improve nutrition in low-income families.

Adela de la Torre, an agricultural economist, is a professor in Chicana/o Studies and director of the Center for Transnational Health at UC Davis.

DeSimone, L.A., Hamilton, P.A., and Gilliom, R.J. (2009). “The quality of our nation’s waters—Quality of water from domestic wells in principal aquifers of the United States, 1991–2004—Overview of major findings” U.S. Geological Survey Circular #1332.

In light of President Barack Obama declaring a state of emergency over the polluted water supply in Flint, Michigan, should obesity be a concern in Flint? What does safe drinking water have to do with obesity, you may ask? Efforts to improve water supplies and to curb obesity have been historically separate. However, might a shortage of good drinking water be a factor in the rise of obesity? 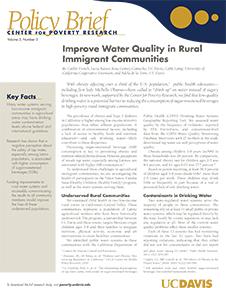