In ongoing research, Center for Poverty Research 2012 Small Grants recipient Patrick Sharkey analyzes migration patterns across four consecutive generations of black and white families. He finds that the degree to which the latest generation of black families has remained in place may be a factor in persistent racial inequality.

Beginning in the early part of the 20th century and ending in the 1960s, millions of black Americans left the southern U.S. in what would be called “The Great Migration.” Declining opportunity and racial tension drove them out of the South, while growing demand for low-skilled labor and the emergence of new communities drew them to cities in the Northeast and Midwest. For much of the 20th century, large numbers of whites also left the South for some of the same economic reasons.

After the 1970s, this migration stream ended, and since then the South has drawn a growing stream of black Americans from the rest of the country. This movement is documented with census data, ethnographic evidence and stories from families who decided to return to the South or to move there for the first time. In that time whites have also migrated to the South, but are more likely to be living there for the first time in their lives.

This study finds that in the most recent generation, black Americans have in fact remained in place to a degree that is unique compared to the previous generation and also to whites of the same generation. This pattern of passing on geographic locations to the current generation can instead be described as “The Great Transmission,” and it has important implications for the demography of race and family migration, as well as for the persistence of racial inequality in the United States.

Movement across Four Generations
This study considers geographic migrations across four consecutive generations of black and white American families. The analysis is based on data collected in the Panel Study of Income Dynamics (PSID), an ongoing longitudinal survey begun in 1968 that includes about 4,800 families.

The multigenerational approach analyzes migration as a process by which the geographic locations of families are linked together across generations. This approach is consistent with the literature on black American migration based on oral histories and qualitative research. Several prominent studies of black American migration focus on the importance of familial connections to place, which extends over long periods of time and across generations of family members.

Staying in Place
This study finds that among families in the PSID, black Americans are actually less likely than whites to return to their families’ points of origin. Prior research has focused attention on the new migration of blacks to the South, but PSID data show that this is little more than a trickle—overall, in this latest generation eight percent of black American families moved southward, while six percent moved northward.

Implications of Geographic Immobility
To understand the implications of these findings, it is important to consider the trajectories of the places that have been passed down to the most recent generation of black Americans. A large portion of the cohort born from the mid-1950s through the mid-1980s have remained tied to urban areas in the Northeast and Midwest that have fared poorly in the post-Civil Rights era. Northern cities that have been transmitted to the current generation of black Americans have experienced major declines in economic opportunities as well as the erosion of key social institutions that sustained urban communities, both of which drew earlier generations of black families.

These findings suggest that black Americans have remained in areas with fewer opportunities and greater risks over time. If the economic advances made by black Americans in prior generations are at least partly attributable to the willingness to make long-distance moves to seek out new opportunities, then the current low level of geographic mobility in the current generation may be an important factor contributing to persistent racial inequality.

Meet the Researcher
Patrick Sharkey is an Associate Professor of Sociology at New York University. His reserach interests include neighborhoods and communities, stratification and mobility, urban sociology, crime and violence and social policy. His book Stuck in Place: Urban Neighborhoods and the End of Progress Toward Racial Equality was published by the University of Chicago Press in 2013.

Download After the Great Migration: Inheriting Disadvantage by Staying in Place 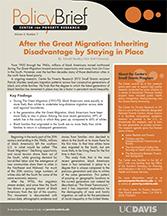