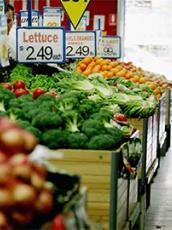 This 2014 report by the U.S. Department of Agriculture examines how much year-to-year changes in the prevalence of household food insecurity is related to changes in unemployment, inflation and the price of food relative to other goods and services.

The study finds that food security has remained essentially unchanged since the 2007-09 recession. Falling unemployment from early post-recession (2009-10) to 2012, absent any other changes, would suggest a modest decline in the prevalence of food insecurity. However, this report finds that potential improvement was almost exactly offset by the effects of higher inflation and the higher relative price of food in 2012.