Place-Based Improvement Programs Favor Gentrifying Neighborhoods Over Those Most in Need By Noli Brazil and Amanda Portier, University of California, Davis 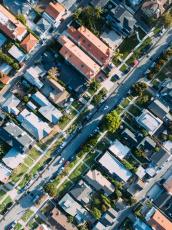 Place-based policies commonly target disadvantaged neighborhoods for economic improvement, typically in the form of job opportunities, business development or affordable housing. In an attempt to ensure that investment is channeled to truly distressed areas, place-based programs narrow the pool of eligible neighborhoods based on a set of socioeconomic criteria. These criteria, however, may not identify the places most in need. In a recent study, we examined the relationship between neighborhood gentrification status and eligibility for a range of place-based improvement programs. We found that large percentages of gentrifying neighborhoods were eligible for each of the four programs, with many neighborhoods eligible for multiple programs. In the case of one particular program, the probability of eligibility was nearly twice as high for gentrifying neighborhoods than not-gentrifying neighborhoods. To ensure that the places most in need of investment do not miss out on these programs, program officials and administrators should consider the gentrification status of neighborhoods and their adjacent neighborhoods as part of the selection and project-development process.

Place-based approaches to community economic development, such as the federal Opportunity Zone (OZ) program rolled out in 2018, are intended to target low-income neighborhoods for economic and social reinvestment. However, the selection criteria used by such programs are unstandardized, rely on a on a narrow set of characteristics despite the multidimensionality of disadvantage, do not account for neighborhood change and are sometimes applied to out-of-date data.[1] These criteria may thus inadvertently grant eligibility to gentrifying neighborhoods, or neighborhoods adjacent to gentrifying neighborhoods, depriving areas in greater need of essential funding.

Given the potential negative consequences associated with gentrification—including the displacement of low-income residents, rising income inequality, and negative health effects among minority and economically vulnerable residents—place-based programs may thus fail to alleviate the problem they were intended to remedy: the spatial inequality of disadvantage.[2]

In our study, we examined the relationship between neighborhood gentrification status and eligibility for four federal place-based programs in 2018: New Markets Tax Credit (NMTC), OZ, Low Income Housing Tax Credit (LIHTC), and the Community Development Financial Institutions (CDFI) program. Our goal was to understand to what extent gentrifying neighborhoods were eligible to receive place-based investment dollars that were needed more urgently elsewhere.

We began by compiling indicators of neighborhood eligibility for the NMTC, OZ, LIHTC, and CDFI programs in 2018. These were based on various sources (for example, 2011-2015 American Community Survey data) and included such criteria as a poverty rate of at least 20% and an unemployment rate 1.5 times the national average. We then established four variables for assessing the gentrification status of a given neighborhood: household income, housing value, gross rent, and college-educated residents. We used these variables to analyze the change from 2000 to 2014–2018 to determine neighborhood gentrification status in 2018. With these data in hand, we ran a series of multivariate regression models to examine the relationship between program eligibility and gentrification status. 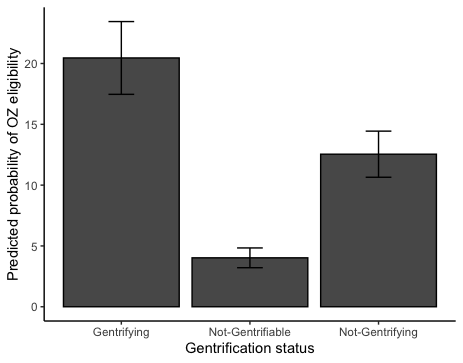 Going forward, policymakers and place-based program officials and administrators should explicitly account for neighborhood socioeconomic changes in the neighborhood selection and project-development process. In addition to incorporating change over time in the eligibility criteria, the most up-to-date ACS data should be used to determine which neighborhoods are experiencing recent socioeconomic improvement. Furthermore, program officials should engage with gentrification more directly—for instance, by categorizing eligibility by neighborhood type rather than treating neighborhoods as homogeneously high- or low-opportunity, and by incentivizing projects designed to mitigate the negative consequences of gentrification.[3] For example, LIHTC funding in gentrifying neighborhoods may mitigate the displacement effects of gentrification by increasing the supply of affordable housing.

Although the overlap between eligibility and gentrification was present across all four programs, it was strongest for OZ. While OZ neighborhoods are poor and low-income on average, many of the selected neighborhoods have structural advantages, including undergoing positive socioeconomic changes.[5] As such, future improvement in gentrifying OZ neighborhoods will be misattributed to the program when instead it may be driven by preexisting positive socioeconomic trends. Furthermore, this program’s eligibility process and investment structure make it susceptible to the types of project development that may reinforce the negative consequences of gentrification.[6] To help avoid these consequences, some selection guard rails in addition to the poverty threshold should be followed, as is already done in the NMTC and CDFI programs.

Moreover, not only should additional indicators of economic distress be incorporated into the program’s qualifying criteria, but also changes in these indicators over time. Given that it is the most recent large-scale economic development program—one with the potential for being the largest in U.S. history—the OZ program warrants serious future investigation in terms of what projects are developed and the impact of those projects on community well-being.

Noli Brazil is an assistant professor of human ecology at the UC Davis.

Amanda Portier is a recent graduate of UC Davis and recipient of the University Medal for excellence.