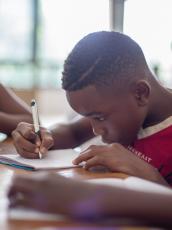 In the United States, poverty, incarceration, and race are linked in complex ways, with much evidence that poverty may be both a cause and a consequence of incarceration. Black men are disproportionately more likely than white men to be arrested and incarcerated, a racial gap that first emerged in the early 20th century. In a new study, I explore the historical role played in that gap by education. I find that black men fully exposed to an expansion of rural primary schools between 1913 and 1932 were 1.9 percentage points less likely to be incarcerated later. This suggests that policies addressing disparities in education today may help reduce the persistent racial gap in incarceration.

Race, poverty, and incarceration are linked in multiple ways in the U.S., where incarceration may be both the result of, and a cause of, poverty.[1] The racial gap in incarceration emerged in the U.S. in the early 20th century. In 1890, black men were 3.1 times more likely to be incarcerated than white men. By 1923, the black-white incarceration ratio had grown to 4.2. In 2010, it stood at 6.4.[2] Police discrimination, harsh sentencing, and high crime rates in poor urban neighborhoods are partly to blame. But, given the strong correlation between education and many positive life outcomes, how might incarceration be related to differences in access to education?[3]

The Rosenwald-Washington collaboration provides an opportunity to address this question. Between 1913 and 1932, this program built almost 5,000 schools for rural black students across 14 southern states. Sponsored in part by northern philanthropist Julius Rosenwald, it increased the supply of schooling for black children and therefore the educational attainment and literacy of blacks born in the South.[4] It could not, however, reach everyone.

In 1910, blacks lagged behind whites in completed schooling by three years on average, a legacy of slavery and of poor investments in southern black schools.[5] By 1940, the racial gap in schooling diminished substantially, but the gap in incarceration continued to widen.[6]

I set out to explore the role of disparities in education in explaining the historical roots of the incarceration gap. To do so, I analyzed the relationship between access to Rosenwald primary schools and the probability of incarceration as an adult between 1920 and 1940 among southern-born black men in the United States.

Using U.S. census data for the years 1920-1940, I assembled a dataset that included the full universe of Southern-born male prisoners and non-prisoners in each relevant census. I restricted the sample to men between ages 18 and 35 who were born in one of the 14 Rosenwald states.

I identified prisoners in 1920, 1930 and 1940 based on their census status. Then I assigned childhood county and town of residence to each individual after matching and attached urban/rural status to each town as of the relevant census year. This allowed me to calculate two measures of exposure to these new schools. The first was a simple count of the years between ages 7 and 13 in which a child had a Rosenwald school in his county. The second measure, which took into account the fact that Rosenwald schools were not large enough for all students, was the proportion of black students in the county who could be served by a Rosenwald school added over the years during which the child was between 7 and 13.

Together, these methods enabled me to measure the extent to which exposure to a local Rosenwald school affected a given subject’s chances of later incarceration. 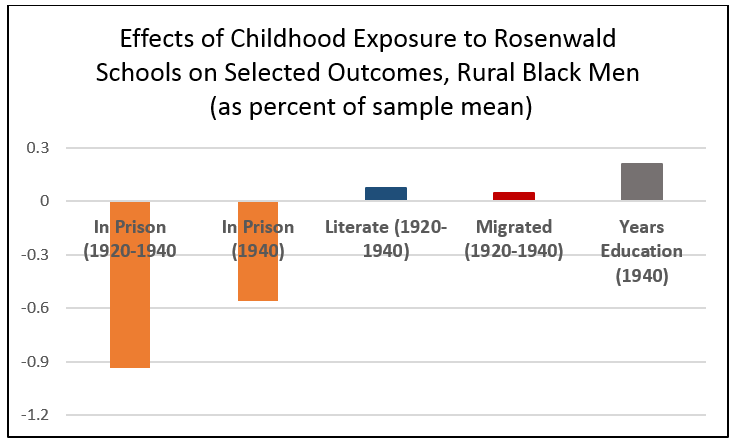 How does the expansion of schools lead to reduced incarceration? We know that greater access to education leads to better job prospects later in life. As a result, the opportunity cost of crime increases, making criminality less attractive and incarceration less likely. My study confirms earlier work showing that exposure to the Rosenwald schools increases education levels by approximately 1.3 years of schooling. I further find that this increase in years of schooling alone is not large enough to drive the reduced rates of incarceration. I show that the Rosenwald schools also led to increased literacy (which also reduces incarceration) and find small and insignificant effects on migration.

In the United States, disparities in education have contributed to racial differences in crime and incarceration since in the early 20th century. Among black children in the rural south, access to a Rosenwald school significantly reduced the likelihood of incarceration in adulthood. It follows that increased investment in education for black Americans today would likely help to reduce the racial gap in incarceration going forward.

Katherine Eriksson is an Assistant Professor of Economics at UC Davis.