California’s Continuum of Care Reform Act (CCR) shifts foster care in the state toward placing children with families and more support for foster parents. We conducted a survey-based study to learn about who is most likely to be willing to serve as a resource family, the level of knowledge about foster care and potential motivations for fostering. We found that the strongest motivations among potential parents are to support foster youth and their biological parents rather than any emotional or financial benefits for themselves. Strong deterrents were financial strain and worries about being able to adequately care for them.

Children enter foster care due to neglect or abuse, which are both strongly associated with family and neighborhood poverty.[1] Over 62,000 California youth were in foster care in 2014, which is more than in any other state. Over 3,700 of those lived in group homes.[2]  Nearly one in five foster youth already experience three or more placements, with an average of two years in temporary care.[3] This long-term instability can damage psychological and mental well-being and further increases risks of poorer life outcomes, including higher levels of unemployment and poverty as adults.[4]

Foster care in California is administered by county agencies that place youth in resource families—which can either be kin or unrelated families—or group homes under the supervision of the State Department of Social Services and county welfare departments. CCR will shift the focus of group home placements toward short-term intensive services. It also prioritizes placing children in resource families and supporting foster parents with increased training. It will also increase payments to kin who care for youth through foster care.

Highly qualified foster families can act as a positive intervention for youth, considering the negative long-term impacts of frequent moves within the system.[5] Our new study addresses an important gap in knowledge about characteristics of the most likely foster families and factors that deter potential parents. These results can help develop targeted outreach and education programs to recruit and retain quality resource families.

Our survey sought to understand potential parents’ knowledge of the foster care system, their motivations to foster youth and possible deterrents. A total of 466 California adults over the age of 25, selected by the survey service Qualitrics, completed the survey in 2016. About eight percent of respondents reported they were “very likely” to foster youth and 14 percent reported that they were “somewhat likely.” The survey can be viewed and completed online at http://goo.gl/rHQqub.

To gauge knowledge of the foster care system, the survey asked about the system’s scope, goals, regulations, resources, and circumstances foster youth typically experience. These questions included the number of California youth currently in foster care, the age at which youth most often enter foster care, the type of placement most youth receive and the average amount of time spent in foster care.

We also examined several predictors of respondents’ willingness to serve as foster parents. To identify potential barriers to fostering that might be addressed through future outreach and education efforts, we considered the role of respondents’ attitudes, beliefs and concerns related to fostering and foster youth.

Adults Most and Least Likely to Foster Youth

The survey provided a picture of what California adults were most and least likely to foster youth:

Our results indicate that California adults have low levels of knowledge about foster youths’ experiences, the foster care system’s goals for youth and families or support available to resource families. The average respondent answered only 62 percent of these questions correctly. Based on a logistic regression analysis, we estimate that respondents’ odds of reporting that they are “somewhat likely” or “very likely” to serve as a foster parent increased by 24 percent with each additional correct response to questions about the system’s goals.

When asked about potential benefits of fostering, respondents were two to ten times more likely to focus on benefits to foster youth and biological parents than  financial or social/emotional benefits for themselves. We note, however, that survey responses likely underestimate motives for fostering, particularly related to financial gain.

Certain perceived benefits demonstrated notable associations with adults’ willingness to foster.  For example, half of willing parents selected “Helps biological parent(s) get the services they need to better care for their children.” Over 60 percent of willing parents identified “Provides a stable and safe home environment for foster youth.” About 40 percent identified “Sets a good example for foster parents’ biological children.”

In terms of potential barriers, 52 percent of all respondents cited the financial strain of fostering. This belief was evident among respondents at all levels of household income, including those earning more than $100,000 per year. The next most frequently cited concerns related to the anticipated challenge of caring for youth. The first, reported by 40 percent of respondents, was the perceived difficulty of caring for a foster youth and subsequently “giving them up.” The second, reported by 37 percent, was a lack of knowledge about the steps required to become a foster parent.

Other concerns had to do with respondents’ life and family situations. One related to their perceived inability to successfully parent foster youth due to being too busy or being unfamiliar with foster youths’ special needs. Another related to the potential negative impacts on their own biological children. Respondents who reported either of these concerns were half as likely to express a willingness to foster as adults who did not.

Certain concerns actually emerged as strong predictors of a future willingness to foster. Respondents whose primary concerns related either to insufficient information about the process of becoming a foster parent or the perceived difficulty of relinquishing care for a foster youth were 70 percent more likely to report a willingness to serve as foster parents in the future than respondents who identified other concerns.

The results of this study could aid targeted outreach efforts to increase the number of resource families available to host children through the foster care system, especially among adults who are most likely to serve as foster parents. Efforts that emphasize the positive impacts of foster care for other members of foster youths’ birth and resource families may particularly help to boost public interest in supporting foster youth. Increasing knowledge about support available under AB 403 could help to assuage concerns of otherwise willing potential resource families.

Targeted efforts to convert African American and Latino adults’ comparatively strong interest in fostering into actual participation may help recruit additional families, particularly in light of the large and growing size of the California Latino population. By the same token, raising non-Latino White adults’ interest in fostering may require the development of tailored outreach to allay their specific concerns.

Jacob Hibel is an associate professor of sociology at UC Davis.

5 Annie E. Casey Foundation. 2015. “Every kid needs a family: Giving children in the welfare system the best chance for success.” 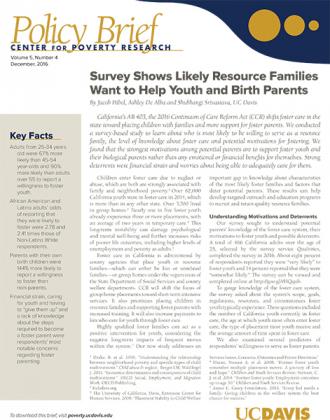 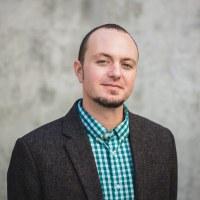 Jacob Hibel received his degree in Sociology and Demography from Pennsylvania State University in 2009. His research focuses on the causes and consequences of childhood educational inequalities, including those related to poverty, disability, race/ethnicity, immigrant generation status, and spatial segregation.