When young adults (YAs) move out of the family home, they often find themselves in a neighborhood that differs considerably from the one in which they grew up. What are the implications of this kind of residential mobility during this particular phase of life? In a recent study, we examined movement in and out of disadvantaged and advantaged neighborhoods as individuals leave home and experience significant life-course events. We found that while the difference between the most and least advantaged neighborhoods remained nearly identical from adolescence to young adulthood, the neighborhood poverty gap between individuals starting out in the least and most disadvantaged residential settings decreased by 18.2 percentage points. In other words, cross-sectional estimates of the poverty gap do not capture the dynamism of changes in poverty with young-adult transitions. Partner formation, home ownership, and educational attainment are important life-course transitions associated with significant moves up and down the neighborhood poverty distribution. Policies guiding adolescents and young adults facing important life-course decisions during the transition to adulthood may help them not only to avoid jumping into more disadvantaged neighborhoods, but also to leave the impoverished conditions in which they grew up. Interventions earlier in the life course that are sensitive to the packaging of residential mobility with human capital, income and household formation are especially important.

​Research on neighborhood inequality has typically used the poverty rate to measure disadvantage. This work has primarily focused on poor neighborhoods while grouping all other neighborhoods into a catchall “non-poor” category despite significant differences between lower-, middle-, and upper-class neighborhoods.[1] For children entering young adulthood and formulating life plans, those differences are important.

Young adulthood is a period characterized by multiple transitions related to work, education and residence.[2] For YAs, then, life-course transitions are connected to residential change and spatial outcomes. Given the freedom and opportunity to act on their preferences, YAs may choose significantly different environments relative to their adolescent neighborhoods. These first decisions in neighborhood selection are largely unique to the transition to adulthood, and have the potential to shift neighborhood inequality in either direction. Put another way, life-course transitions that accompany migration are key signals of upward social mobility—turning points that lead individuals into improved neighborhood environments, or not.[3]

Focusing on the persistence of resilient inequality obscures the dynamism across the larger matrix of flows, including those in and out of more advantaged neighborhoods. For our study, we unpacked the binary category of poor/non-poor into advantaged, middle and disadvantaged neighborhoods, and studied the moves of YAs specifically. We did so in order to provide new thinking about the nature and levels of inequality.[4]

We used data from the National Longitudinal Study of Adolescent to Adult Health (Add Health), a nationally representative, school-based longitudinal survey tracking the health and behavior of adolescents in middle and high school through young adulthood.5Add Health consists of a random sample of 20,745 students and their caregivers chosen to complete a detailed survey. These surveys were completed in 1994–1995 when respondents were between the ages of 11 to 21 (Wave I). Approximately 14,000 respondents were re-interviewed in 2008 when they were between the ages of 24–32 (Wave IV). We used Wave I and Wave IV to represent the period before (adolescence) and at or near the end of the transition to adulthood period (mid-young adulthood), respectively.

The first section of our analysis established the levels of and changes in neighborhood inequality during the transition to adulthood. The second separated this gap by residential movers and stayers. In the third, we examined the explanatory factors potentially driving the resorting of individuals across the neighborhood poverty distribution as they transition out of adolescence and form their own households.

Movers Drive the Reduction in the Neighborhood Poverty Gap

Figure 1: Point-in-time and longitudinal measures of the neighborhood poverty gap at Wave I and Wave IV 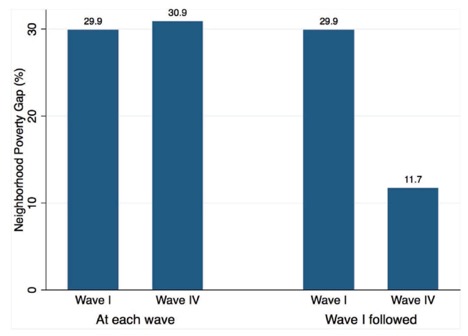 Interventions Should Factor in Neighborhood Residential Mobility During Young Adulthood

Our results suggest that non-trivial proportions of individuals living in advantaged and disadvantaged neighborhoods during adolescence find themselves in significantly different residential settings at young adulthood. Importantly, these exits lead to a marked decrease in the longitudinal neighborhood poverty gap. Although this decrease may be temporary, it highlights the transition to adulthood as a critical period for potentially loosening the chains that link disadvantage from adolescence to adulthood.

In light of these findings, poverty-reduction policies focusing on residential mobility out of disadvantaged neighborhoods should pay more attention to mobility during the transition to adulthood. Because critical life-course events during this period shape residential mobility pathways in and out of disadvantaged and advantaged neighborhoods, such policies should encourage other positive life-course events, such as gainful employment, high school completion, or post-secondary schooling. They should also avoid binary conceptualizations of neighborhood poverty, since labelling neighborhoods as simply “poor” and “non-poor” obscures important changes occurring across the neighborhood disadvantage spectrum.

Noli Brazil is an Assistant Professor of Human Ecology at the University of California, Davis.

William A.V. Clark is a Research Professor of Geography at the University of California, Los Angeles.