Domestic violence is a significant problem in the U.S. It leads to serious medical and emotional costs for victims and their children, but also has important negative spillovers. Our new work finds that exposure to a higher proportion of peers experiencing domestic violence during primary school leads to lower academic achievement in the long-run, even after moving to schools with a mixed peer composition.

Over 24 percent of women and 13 percent of men 18 and older have been victims of severe physical violence by an intimate partner.[1] Victims incur significant medical and emotional costs,[2] and their children exhibit aggressive behavior, depression, decreased social competence and diminished academic performance.[3]

Our earlier work shows that primary school children exposed to domestic violence negatively affect the academic achievement of their peers.[4]  Given the large positive correlation between poverty and domestic violence, these spillovers could partly explain the rich-poor achievement gap.

Our new study analyzed whether the effects on the affected children’s peers persist once these children are mixed into new secondary schools. That is, we sought to know whether having primary school classmates who experienced domestic violence significantly affects academic achievement in secondary and postsecondary school.

The data used in this project are student-level data for children attending third through fifth grades in Alachua County, Fla. between the academic years 1995-96 and 2002-03. These data contain county school district academic achievement, GPA and degree attainment from Florida’s K-20 database. These data include just over 40,000 observations.

For data on domestic violence, we used publicly available records from the Alachua County Court House. The data contains the date when one family member (e.g., the mother) petitions the court for a temporary injunction for protection against another. Although all cases of domestic violence in our dataset are eventually reported, we exploit the timing of the petition to identify peers living in households with previously reported versus unreported cases at the time of enrollment.

To overcome selection into schools and classrooms that could bias our results, we exploit the variation in peer domestic violence that occurs at the school-grade-year cohort level, while controlling for effects that are specific to each school-grade. Thus, our identification strategy relies on idiosyncratic shocks in the proportion of peers from families linked to domestic violence, across grade cohorts, within a school over time.

Our results show that a higher proportion of primary school peers from families affected by domestic violence leads to lower academic achievement even in secondary school. The negative effects are strong and significant for unreported cases but are close to zero for cases that are reported.

Our previous work[5] examines potential reasons why reporting may mitigate these spillovers: 1) The report stops the violence, 2) The parent reporting abuse takes other steps to improve the home environment, 3) The judicial system triggers other interventions, such as the school allocating counselors to support affected children.

Importantly, the negative effect is larger in schools with above-average levels of domestic violence. A one-percentage-point increase in the proportion of peers with unreported domestic violence leads to a statistically significant 0.014 standard deviation decrease in secondary school achievement. Conversely, the same increase in peers with reported violence yields a null effect.

These effects continue through secondary school completion, college enrollment and degree attainment.[6] A one-percentage-point increase in peers with unreported domestic violence leads to a 0.5-percentage-point decrease in the probability of enrolling in college or obtaining at least a Vocational or Associate degree. These effects are statistically insignificant for reported domestic violence.

Given the sample’s average cohort size of 87 students, we calculate that inducing one additional parent to report domestic violence leads to a 1.37 standard deviation increase in academic achievement for the cohort. Using prior estimates of the effect of test scores on wages[7] we calculate that this increase could be worth approximately $550,000 for this cohort’s total lifetime earnings.

Because exposure to domestic violence is negatively correlated with income (i.e., lower-income schools have a higher prevalence of domestic violence), our findings help explain the income-based achievement gap. The magnitude of this contribution, however, is relatively small. Our estimates imply that differences in exposure to domestic violence explains approximately two percent of the secondary school income achievement gap. These results do emphasize, however, the potential for conditions in poor neighborhoods and poor schools to have spillover effects that can reduce learning for all children in those environments.

Scott E. Carrell is an Associate Professor of Economics at UC Davis.

Mark H. Hoekstra is an Associate Professor of Economics at Texas A&M.

Elira Kuka is a Ph.D. candidate in Economics at UC Davis.

[2] Center for Disease Control and Prevention (CDC). 2003. “Costs of Intimate Partner Violence Against Women in the United States.”

[6] Results preliminary; our current data contain no information on students enrolled in out-of-state  postsecondary institutions. We are currently pursuing funding to obtain a more comprehensive measure of college enrollment from the National Student Clearinghouse. 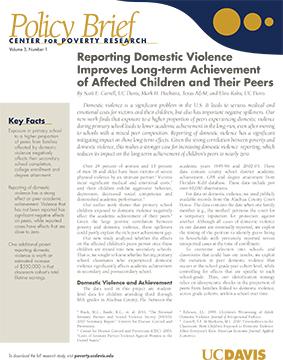 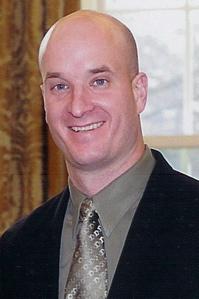 Scott Carrell’s research focuses on the effect of school inputs, peer effects and barriers to college. 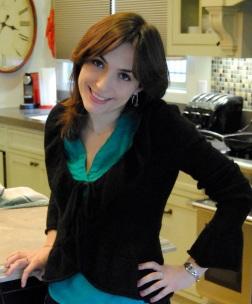 Elira Kuka is a PhD candidate in the Department of Economics at the University of California, Davis. Her research interests lie in public economics and public finance.