Paid Family Leave (PFL) provides income for workers to take time off to care for a newborn or sick loved one. The U.S. is the only industrialized country without national PFL. Moreover, job-protected leave is not universal. A large body of research on policies outside the U.S. suggests that paid and protected leave help workers remain in the labor force. Increasing researchers’ access to governmental administrative data would further show how to improve these policies for U.S. workers. Limited existing data from California PFL show that the majority of new mothers do not take advantage of this policy, and that take-up is even lower among low-wage women.

Time off from work is partially granted to most U.S. workers under the Federal Family and Medical Leave Act (FMLA) of 1993. It mandates that employers allow up to 12 weeks off unpaid. However, this protection is restricted to those at firms with more than 50 employees and who work at least 1,250 hours per year.[1]

Based on employer size, only 65 percent of U.S. workers are eligible for FMLA.[2] The fraction of the workforce with job protection under FMLA is even lower since 23 percent of U.S. workers work less than the required 1,250 annual hours.[3] Lower-wage workers in particular are more likely to work for smaller firms and for fewer hours per year.

When California enacted PFL in 2004, it became the first U.S. state to offer paid time off for bonding with newborns or to care for sick family members. Although eligibility is nearly universal among Californians who have worked in the previous year, only those who are FMLA-eligible have job protection. New Jersey introduced a similar policy in 2009 as did Rhode Island in 2014.

California PFL benefits reimburse at 55 percent of a base weekly wage for up to six weeks. They start at a minimum of $50 weekly up to a maximum level that is updated yearly ($1,104/week in 2015). PFL in California is funded by a payroll tax of approximately 0.9 percent. The maternity leave component of PFL builds on existing temporary disability benefits (TDI), which provides up to ten weeks of paid leave for a normal pregnancy.

Although a large majority of the California workforce is eligible for PFL, only a quarter of new mothers use the benefit.  Administrative data from the California Employment Development Department (EDD) show a take-up rate of between 25-40 percent of eligible mothers.[4] To compare, Unemployment Insurance has a take-up rate of roughly 80 percent. Medicare nearly 100 percent.[5]

Evidence is scarce on the extent to which California PFL leave taking keeps new mothers in the labor force. Studies using limited survey data suggest that maternity leave taking increased by about three weeks after the 2004 implementation.[6] One study suggests that leave-taking increased more among Black, low-educated or Hispanic mothers.[7]

Awareness of the PFL program may also be low. According a 2011 study,[9] only half of surveyed adults who had an eligible life event knew about the policy. Some workers who knew about the policy feared employer punishment, or said that the replacement rate was too low.

Family Leave Outside the U.S.

Studies on PFL outside the U.S. suggest some ways the policy affects workers and labor markets. Family leave outside the U.S. is more generous in terms of both benefits (e.g., up to 100% of income in Germany for the first 14 weeks of leave) and job protection (e.g., up to 1 year in the UK). Recent high-quality research on these programs benefits from large, anonymized administrative datasets that cover the entire workforce. This kind of data is not typically made available on U.S. workers.

A 2014 study[10] shows that an Austrian reform which reduced the duration of paid benefits from 24 to 18 months, while keeping job protection unchanged, induced a drop in leave taking by 3.4 months on average. This suggests that new mothers would take advantage of more generous policies if available. The study also suggests that only the combination of job protection and benefits generates both longer leave taking and a larger probability of returning to work.

A 2015 study[11] on Norway’s PFL finds large effects of paid leave on employment and earnings five years after birth for mothers who took little to no unpaid leave before paid leave was available.  Although not precisely estimated, paid leave increased the likelihood that high school dropout mothers returned to work compared to mothers with more education. Norway’s maternity leave policies before the introduction of PFL in the late 1970s were similar to U.S. policies today: working mothers had access to 12 weeks of unpaid leave.

Need for Data and Research on U.S. Policies

Research on PFL from other countries has largely advanced our knowledge of its impact on working mothers. However, in the U.S. paid leave is limited and protected leave is not universal.

Ariel Pihl and Gaetano Basso are Ph.D. candidates in Economics at UC Davis.

[1] US Department of Labor, Wage and Hour Division. “Fact Sheet #28: The Family and Medical Leave Act.”

[4] 25% represents the number of leaves for women aged 18-45 reported by EDD divided by the number of California births; 40% is an upper bound based on women’s labor force participation rate.

A day after Alex Gustafson’s wife gave birth to their daughter in December, he officially began the 12 weeks of fully paid family leave offered by Automattic Inc., the San Francisco tech company where he works.

Anthony Goytia of La Puente wishes he had that option. When his wife gave birth to their daughter in April, they lost about $550 of monthly income. So Goytia started working a second job at Macy’s to supplement his early shift unloading trucks at UPS. 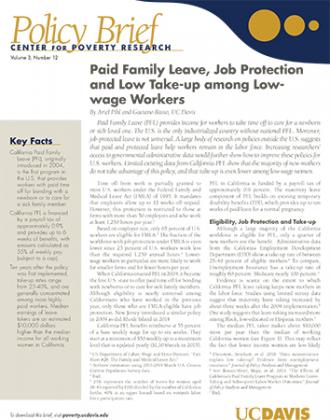