The goal of federal food and nutrition programs in the United States is to improve the nutritional well-being and health of low income families. The Special Supplemental Nutrition Program for Women, Infants and Children (WIC) provides federal grants to states to support nutrition for pregnant and post-partum mothers and children up to age five. Our study, one of the first to convincingly describe the program’s causal effect, found that WIC’s implementation led to an increase in average birthweight, especially among mothers with low levels of education. This suggests that the value of WIC benefits for needy participants is substantial compared to the program’s relatively low costs.

The goal of the WIC program is to increase nutritional well-being among low-income pregnant/post-partum women, infants and children up to age five by providing food packages and nutritional counseling. Since its inception in the mid-1970s, the number of WIC participants has grown to 8.3 million at a cost of $6.3 billion in 2014.[1]

To be eligible for the program, WIC participants must live in households with family incomes below 185 percent of the Federal Poverty Level (FPL) or participate in another safety net program such as Medicaid, TANF or SNAP. They must also be certified to be at nutritional risk, but virtually all financially eligible persons satisfy this requirement.

Food packages are provided in the form of vouchers that can be used to purchase specific items from participating supermarkets. WIC maintains a list of approved foods, which include juice, fortified cereal, eggs, cheese, milk, dried beans, tuna, carrots and iron-fortified infant formula. Post-partum women have access to free infant formula and breastfeeding assistance services.

Our study estimates the program’s causal effect on infant health by comparing changes in infant health across counties that established WIC programs in different years, the earliest starting in 1972. We found that the introduction of WIC improved birth outcomes, especially among infants born to the most disadvantaged mothers.

We based our study on variation in the years WIC program sites were established from county to county to compare differences in infant health. The date that each county first established WIC services is not available from a unified source, so we compiled information from several directories and congressional filings. We compiled county-level information on WIC agencies for the years 1974, 1975, 1978,[2] 1979 and 1989.

Data on birth outcomes come from vital statistics records, which are coded from birth certificates and available beginning in 1968. We limited our analysis to 2,059 of the 3,100 counties that had a WIC agency by 1979. This sample accounts for more than 86 percent of the U.S. population. We focused on two dependent variables: mean birth weight in grams and the fraction of newborns classified as “low birth weight” (less than 2,500g).

To account for effects on infant health that may come from county level trends and changes in other social programs, we included in our analysis variables for cash public assistance, and medical, retirement and disability programs. We also included an indicator for food stamp program availability as well as a set of county level variables that might be correlated with the introduction of WIC.

We found that when made available by the third trimester of pregnancy, WIC improves infant health. The effects are most pronounced in high-poverty counties and among women with low levels of education. We estimate that among all infants born to women who received WIC benefits, birth weights increased by 18-29g. 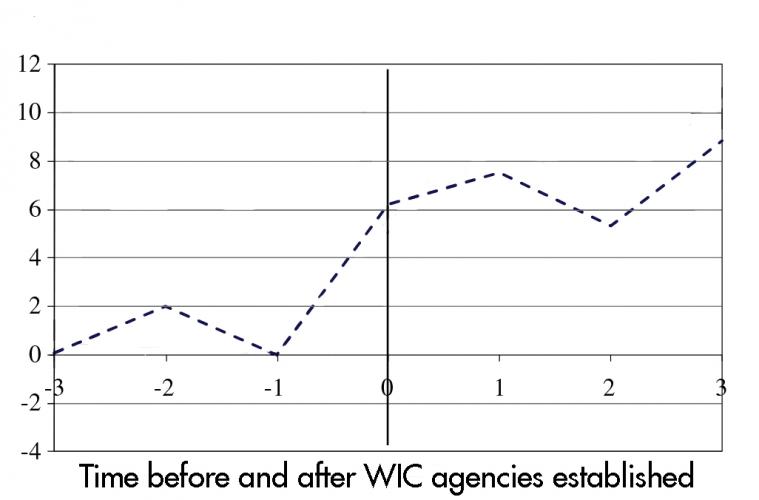 Among infants born to women with less than a high school education and who received WIC benefits, we estimate that average birthweights increased by 23-38g. For mothers with exactly 12 years of education who received WIC benefits, we estimate an average birth weight increase of 16-27g. Estimated effects for mothers with higher education are statistically insignificant.

We found that the largest percent reduction in the probability of birth weight below a certain threshold occurs at the bottom of the birth weight distribution. The impacts become gradually smaller as the birth weight threshold is increased, and reaches near zero for births below 3,750g.

We found no evidence that WIC affects fertility or the characteristics of mothers giving birth, which makes it unlikely that these estimates are generated by indirect effects on the composition of births. We also found no evidence that these effects were caused by larger changes in gestational age. While our estimates are not statistically significant, the positive effects of WIC are in states with low AFDC benefits.

Persistent Returns for a Low Cost

The effects we estimate in this study may lead to substantial and persistent effects on earnings and health. A 2007 study[3] found that a ten percent increase in birth weight is associated with a one percent increase in adult earnings. Given the magnitude of our estimates, this suggests that WIC could increase the annual earnings of their children by about $400.[4] Increased birth weight is also associated with improvements in long-run health and education.

The United States has experienced many demographic, social, and economic changes since the inception of WIC, but our results still inform today’s policy debates. The birth weight increases that we estimate among early program participants suggest that the value of WIC benefits to needy participants can be substantial compared to the relatively low costs of implementing the program.

Marianne Page is the Deputy Director of the Center for Poverty Research and a Professor of Economics at UC Davis.

Ann Huff Stevens is the Director of the Center for Poverty Research and a Professor of Economics at UC Davis.

[1] WIC program information is available on the USDA website: http://www.fns.usda.gov/pd/wisummary.htm.

[2] The WIC implementation variable is set to missing for the other counties that are in the 37 states not covered in the 1978 directory, and they are not included in our regressions.

[3]  Black, Sandra, et al. 2007. “From the cradle to the labor market: the effect of birth weight on adult outcomes.” Quarterly Journal of Economics. 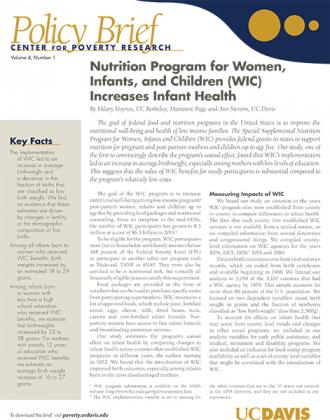