Health problems, such as diabetes, are often considered the result of either genetics or individual choices. In fact, our network of family, friends and co-workers can have a major impact on how we measure and manage our health.

In a new study, Center for Poverty Research Visiting Graduate Scholar Elyse Kovalsky finds that individuals often measure their own health by comparing themselves with others in their social networks, which may directly contribute to existing health disparities in the United States.

Social networks play an important role in shaping diabetes management and overall health. The effect of social networks on health can be a function of their size, one’s relative degree of social isolation, the resources one’s social network makes available as well as role models within the network.

This brief focuses on the impact of role models within social networks, specifically the practice of comparing one’s own experiences with type 2 diabetes to those of family members, friends and others. Research suggests that people are most likely to be connected with others who are similar along many dimensions, including ethnicity and social class. Because of this, social networks may contribute to larger-scale health inequalities by encouraging these kinds of comparisons.

For policymakers, health providers and researchers interested in reducing health disparities and improving the health of the poorest and most disadvantaged members of society, it is critical to understand the impact social networks have on health as well as opportunities for intervention.

Living with Diabetes
This study drew on 40 in-depth interviews with Latino adults with type 2 diabetes. The interviews were conducted from 2009-10 in and around Chicago and the San Francisco Bay Area. Twenty-three women and 17 men participated in the study, ranging in age from 33 to 70. Education levels varied from functionally illiterate to a bachelors or other advanced degree. Each participant was receiving regular medical care for his or her diabetes.

Use of Embedded Role Models

Participants more frequently explained the poor health of negative embedded role models in terms of individual choice. They used these explanations to “distance” themselves from these role models. Distancing is a strategy to emphasize the differences between one’s own health behaviors from those of another’s, often highlighting others’ stigmatized behaviors and ignoring similarities. Participants most often made these comparisons between themselves and those in extremely poor health, such as those who had experienced serious diabetes complications, including amputations.

Researchers interviewed a 66-year-old woman diagnosed with diabetes 10 years ago who has poor diabetes health management. She referenced several negative embedded role models: “I started to see people who had their foot cut off, and I said, that’s what happened to my brother. Why did that happen to my brother? Well it wasn’t because the disease was so very bad. Maybe it was bad, the disease, but also he never took care of himself. He was very stupid.”

Her brother’s example might have motivated careful management of her diabetes, but instead she distanced herself from her brother’s example. In her own care she avoided checking her blood sugar, did not exercise and described a diet that left her blood sugar levels out of control. Still, she emphasized her brother’s behaviors that differed from her own, such as his smoking and drinking coffee with regular sugar. She understood diabetes to be a serious health condition that could negatively impact her life, yet her diabetes health management remained poor.

The Importance of the Social Network
This study suggests that embedded role models are frequently used as points of comparison for assessing one’s health. They work alongside other determinants of health to frame a health condition and influence health beliefs, decisions and behaviors. Public health campaigns and initiatives to address health disparities should acknowledge the role of embedded role models in their health messaging. Health providers can also inquire about their patients’ embedded role models, and can discuss the range of tools a patient has for assessing his or her health.

The practice of comparing oneself to embedded role models at the individual level may also have implications at the community level, especially in areas with a high prevalence of health conditions like diabetes. In these communities, there may be greater opportunities to distance oneself from negative embedded models, and to assess one’s health using points of comparison that lead to good diabetes health management.

Meet the Researcher
Elyse Kovalsky is a Ph.D. candidate in Sociology at Northwestern University and was a 2012 Visiting Graduate Scholar at the Center for Poverty Research. Her research interests include inequality and stratification, health and health disparities and social policy.

About the Visiting Graduate Scholars Program
Each year, the Center hosts Ph.D. students from across the country as Visiting Graduate Scholars to conduct poverty research in a variety of disciplines, including economics, psychology, sociology, social work, public policy, law and education. Their coursework and research during their stay expands their understanding of the causes and consequences of poverty, and offers faculty mentorship and support in their work.

Download Nearby Role Models May Lead to Poorer Health 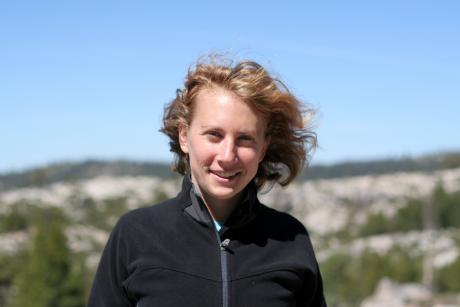 Elyse Kovalsky’s research investigates the processes of intergenerational transmission of disadvantage, examining how families navigate foreclosure as an example of housing and financial instability, as well as the effects of this instability on families.