Missed Housing and Utility Payments Are Common and Persistent in the United States By Ryan Finnigan and Kelsey D. Meagher, UC Davis

Housing and utility costs consume the majority of monthly incomes for millions of individuals and families in the United States. Missed payments can result in penalties, utility shutoffs, and evictions. Between 14 and 16 percent of the U.S. population experiences utility and/or housing hardship each year, defined as the inability to make full and on-time payments anytime in the past year.[1] Our study found that utility hardship is more common and persistent than housing hardship, which suggests that it is a more durable form of deprivation. Households that experience only utility hardship are notably more disadvantaged than those with only housing hardship. We also found that poor health is the strongest predictor of both hardships.

Utility and Housing Hardship Are Common in the U.S.

Nearly 40 percent of Americans experience material hardship, meaning that they struggle to meet at least one basic need (such as housing, food, utilities and healthcare). Research shows that many low-income households juggle different basic needs. For example, some will choose to forgo utility payments to keep up with rental or mortgage payments.[2] While food insecurity is the most common hardship, housing and utility hardships are also common, and missing these payments can result in large penalty fees, utility shutoffs, and evictions and can put low-income households at risk of losing adequate shelter.[3]

Material hardships and income-based poverty are related, but little is known about the prevalence of combinations of different hardships. In our study, we looked at combinations of utility and housing hardship, which are significant household expenses. We used nationally representative data from the Survey of Income and Program Participation (SIPP*) to examine how household events commonly associated with poverty (such as income loss or the decline in health of a family member) may trigger missed utility and/or housing payments.

Utility Hardship Is More Common and Persistent than Housing Hardship 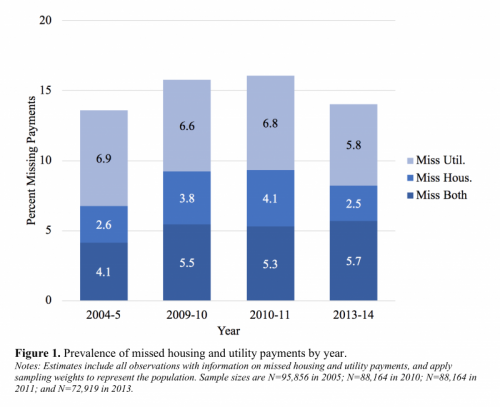 Utility Hardship Is Linked to Greater Disadvantage than Housing Hardship

Utility Subsidies Are a Policy Option to Support the U.S. Households in Greatest Need

Policymakers interested in addressing material hardship among poor Americans often focus on programs for food, job training, or housing, but overlook options such as utility subsidies. The results of our study suggest that utility subsidies such as the federal Low-Income Home Energy Assistance Program (LIHEAP) could help reduce multiple forms of hardship, given the more disadvantaged characteristics of households that experience utility hardship. Currently, only 19 percent of eligible households receive LIHEAP benefits, totaling 6 percent of all households.[5] Given reductions in the cash safety net and recent concerns about extreme poverty in the United States, policy solutions that address utility hardship may be an important tool to assist the families in greatest need.

Ryan Finnigan is an Assistant Professor of Sociology at UC Davis.

Kelsey D. Meagher is a PhD Candidate in Sociology at UC Davis.

[1] Finnigan, Ryan, and Kelsey D. Meagher. Forthcoming. “Past Due: Combinations of Utility and Housing Hardship in the United States.” Sociological Perspectives.

[4] Heflin, Colleen. 2016. “Family Instability and Material Hardship: Results from the 2008 Survey of Income and Program Participation.” Journal of Family and Economic Issues 37(3):359-72.