Where children grow up has a striking effect on where they live as young adults. Our new study examined an experimental federal housing voucher program from the 1990s to learn what factors may contribute to children living in higher-income neighborhoods as young adults. We find that housing assistance helps the next generation to exit concentrated poverty. We also found that a family’s finances, ties to neighborhoods and the housing market all play roles, but a family’s desire to live in higher-income, more integrated neighborhoods is also important.

When choosing where to live, poor families face tight rental markets, limited time to search and persistent racial and class segregation in U.S. cities.[1] These can have particularly strong impacts on Black children’s chances of neighborhood mobility. One study[2] found that of children who grew up in the poorest fourth of neighborhoods, 72 percent of Black children compared to 40 percent of White children will live in poor neighborhoods as adults.

During the 1990s, families living in public housing in extremely poor neighborhoods of Baltimore, Boston, Chicago, Los Angeles and New York could apply for the Moving to Opportunity (MTO) program. MTO was an experiment implemented by the U.S. Department of Housing and Urban Development to measure outcomes for families who moved out of high-poverty neighborhoods.

One group of families received a traditional Section 8 voucher to rent an apartment with no geographic restrictions. The MTO group received the same voucher as well as housing and budget counseling, but had to move to a neighborhood with a poverty rate below ten percent. The control group received no additional assistance beyond remaining in public housing. The program required families to stay in their new neighborhoods for only one year.

For our study, we compared families who received MTO vouchers to families who received no assistance beyond public housing. Another recent study of the MTO[3] also found that young adults from families that received vouchers lived in better neighborhoods. Our study examined the mechanisms underlying this finding, examining how parents’ economic and social characteristics, as well as their exposure to various types of neighborhoods, contribute to where their children live as young adults and how housing assistance interacts with these characteristics.

We analyzed 2008 survey data from 496 young adults whose families participated in the MTO in Baltimore and in-depth interviews of 51 youth and their caregivers conducted in 2003-04 and 2010. These young adults were children at the start of their participation in the program and over 18 in 2008.

In 2008, about half of these young adults still lived with their parents, but the results are consistent for both young adults who live with parents and those who live on their own. Our sample of young adults often moved into and out of the family home, so an out-of-home measure is unreliable. In this brief we report the results from the whole sample.

Extended families play a key role in housing decisions, especially for those living in poverty. Having grandparents who live in moderate- to high-poverty neighborhoods ensured that children will stay bound or return to these types of neighborhoods. MTO vouchers were more helpful in facilitating exit from high poverty neighborhoods if families had not lived in their original neighborhood very long.

Our analysis also suggests that a parent’s drug and alcohol abuse is a factor in adult children remaining in a high-poverty neighborhood. The majority of our interviewees had a parent or caregiver who ever had issues with drugs or alcohol. Those whose parents stopped using drugs were more likely to exit high-poverty neighborhoods than those whose parents continued to use drugs.

The MTO voucher also had an “enhancement” effect for young adults whose parents had at some point lived in a predominantly White neighborhood before participating. Among those whose parents ever lived in a predominantly White neighborhood (15% of the total sample), 24 percent of young adults in the control group and 73 percent in the MTO voucher group exited high-poverty neighborhoods. This suggests that if parents are open to living in more integrated neighborhoods—which may have more resources despite similar poverty rates—they may pass this along to their children.

Our study indicates that housing vouchers have lasting intergenerational effects on mobility, so increasing their effectiveness is critically important. Mobility counseling may facilitate moves to higher-income neighborhoods by widening people’s perceptions of what these neighborhoods offer.
Housing assistance programs should also assess neighborhoods in terms of access to quality public education and safe streets. These are both critical in breaking the intergenerational cycle of poverty.

Ann Owens is an Assistant Professor of Sociology and Spatial Sciences at the University of Southern California.

Susan Clampet-Lundquist is an Associate Professor of Sociology at St. Joseph’s University.

This study was funded in part by a Center for Poverty Research Small Grant. 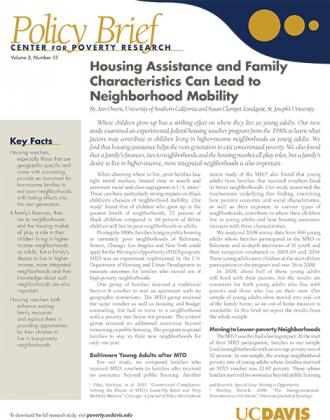