High unemployment during the 2007-09 Great Recession undoubtedly contributed to the increase in irregular work hours, given the large growth of low-wage and part-time jobs in the recovery.[5] Other contributors include growth in temporary and contract work[6] and service employer practices like “just-in-time” scheduling to reduce costs.[7] Perhaps most profoundly, the general decline of institutions like labor unions also weakened workers’ general employment stability and earnings.[8]

This study uses data from the 2004 and 2008 panels of the U.S. Census Bureau’s Survey of Income and Program Participation (SIPP). Our first sample followed a group of hourly workers (N=31,237) between the ages of 25-55 from 2004-07. The second followed similar workers (N=31,924) from 2008-13. We estimate the percentage of workers who report “hours vary” instead of a consistent number of weekly hours over each four-month survey period.

We then examine the impact unionization may have on workers reporting “hours vary” and the associated consequences for earnings. We measure union membership at the individual level based on data from the 2004 and 2008 SIPP panels, and at the state level with Current Population Survey (CPS) data.[9] Across both samples, the poverty rate for non-union workers was 7.1 percent. Among union members it was 2.2 percent.

A series of regression models estimate the relationship between unionization and the probability of reporting varying hours, as well as its associated earnings penalty. Our controls at the state level include gross state product per capita, economic growth, unemployment, effective minimum wage, population and region. Individual-level controls include age, sex, race/ethnicity, marital status, education, metropolitan status, industry and occupation.

The Great Recession had a nearly immediate impact on the fraction of workers with irregular work hours. The percentage who reported “hours vary” over a four-month period increased by more than two percentage points in late 2008, an estimated total of more than two million workers. Between 2004 and the end of 2007, about 29 percent of all workers reported “hours vary” at any point for at least one four-month survey period. Between 2008 and mid-2012 this percentage was nearly 40 percent. 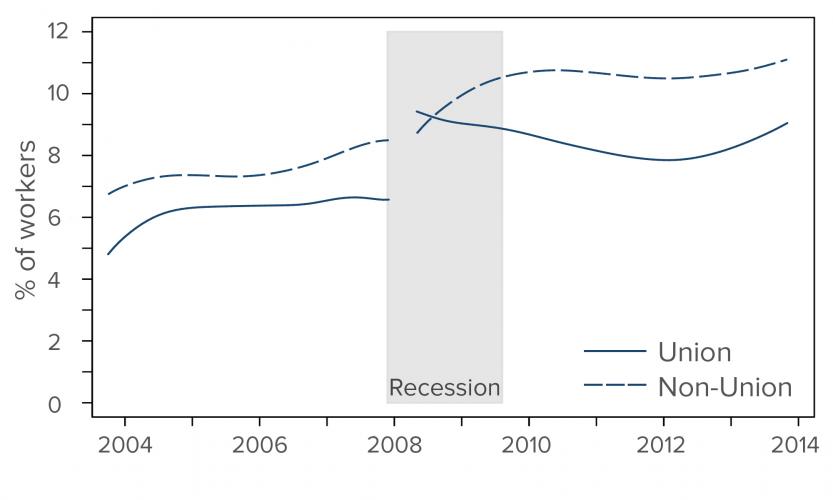 Workers who reported “hours vary” were about three times more likely to work part-time because of slack work or an inability to find full-time work compared to workers with steady hours.

This study shows that workers with hours that vary from week to week earn less and have higher rates of poverty. The continuing growth in these types of jobs means that many more low-wage workers could find it impossible to get ahead.

This study also suggests that unionization may increase the likelihood that workers have steady hours, higher pay and lower poverty rates. This is consistent with research showing the positive effects labor unions have on employment security and wages. Greater recognition of workers’ rights to organize and collectively bargain could help strengthen unions’ abilities to negotiate for workers’ security.

Ryan Finnigan is an Assistant Professor of Sociology at UC Davis.

Joanna Hale is a Post-Doctoral Research Scientist at the Max Planck Institute for Demographic Research. 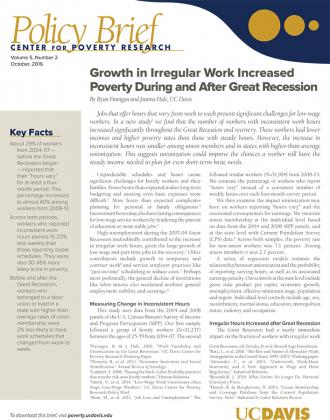