The Great Recession and Greater Disparities in Employment and Earnings By Hilary Hoynes and Douglas Miller, UC Davis; and Jessamyn Schaller, University of Arizona

In the recent recession, unemployment nearly doubled to 9.5 percent by mid-2009.  This figure is powerful in and of itself, but does not tell the whole story.

In a recent study, Center for Poverty Research Faculty Affiliates Hilary Hoynes, Douglas Miller from UC Davis, and Jessamyn Schaller, from the University of Arizona, find that the economic downturn widened existing disparities in wages and employment, and that African Americans, Latinos, young people and those with less education were hit hardest by the shrinking job market.

The Great Recession of 2007-09 in the U.S. is the most severe and prolonged recession-recovery cycle in the post-war period, even compared to one in the early 1980s that encompassed two cycles back-to-back. In previous cycles, employment returned to pre-recession levels within 48 months of the recession’s start. Four years after the start of the 2007-09 recession, the U.S. unemployment rate remained approximately 3.5 percent higher than its pre-recession peak.

The impacts of the Great Recession, however, are not necessarily experienced by all workers to the same degree. National statistics can obscure dramatic differences in the severity of the cyclical impacts for different groups. For example, a recent analysis of labor market data shows that men experienced significantly larger job losses in the Great Recession compared to women, yet in the expansion male employment is picking up more rapidly.

Despite these nuances, this study finds an overarching picture of stability in the demographic patterns of response to the business cycle over time. Who lost in the Great Recession? The same groups who lost in the recessions of the 1980s, and who also experience weaker labor market outcomes even in the good times. Viewed through the lens of these demographic patterns, the Great Recession is different from earlier business cycles in size and length, but not in type.

Cycles of Recession and Recovery
The researchers began with an overview of regular fluctuations in rates of employment and unemployment from 1979 through 2011, covering four cycles of economic recession and recovery in the U.S. Using national time series data, they compared the Great Recession of 2007-09 to earlier recessions in terms of severity, duration and subsequent recovery. They then incorporated data on individuals from the Current Population Survey Merged Outgoing Rotation Group (CPS MORG) to measure how rates of unemployment, employment and earnings changed across different groups during the Great Recession.

Researchers estimated rates of employment and unemployment, as well as average weekly earnings for various demographic groups divided by race, gender, education level and age. They then used a panel data model to leverage variation across U.S. states in the timing and severity of business cycles. Using this model, they were then able to measure how the a given change in the unemployment rate (state to state and month to month) impacted the different groups. 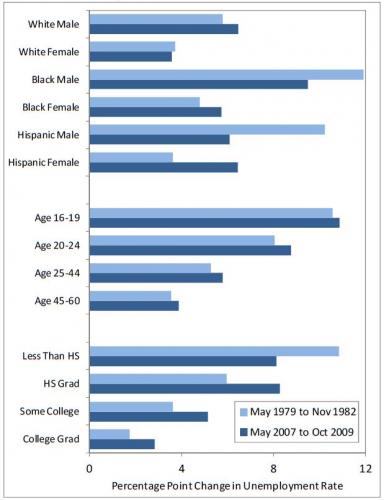 Impacts across Demographic Groups
In 2007, substantial disparities in employment and wages divided demographic groups. Less than half of those with no high school diploma had jobs at the peak of employment in 2007, compared to 86 percent of college graduates. Among African American women, 59 percent were working, compared to 71 percent of white women. In May 2007, just before the recession began, the average weekly income for white men was $830. For African American men it was $448, and for Hispanic men it was $524. For Hispanic women it was a mere $298.

Consistencies across Recessions
When the researchers compared the four recession-recovery cycles since the early 1980s, they found that the impact across demographic groups was quite similar to the Great Recession. In fact, when expanding their analysis to explore all cycles between 1979 and 2011, they found that in each, men fared worse than women, non-whites worse than whites, the young worse than the old, and those without higher education worse than those with a college degree.

This stability is somewhat surprising given the tremendous changes to the labor market in past decades, including the rising labor force attachment of women, the increase in minority share of the labor force and the decline of manufacturing.

Persistent Employment Patterns
Why do some groups consistently suffer more in recessions than others? This study shows that the sustained vulnerability to cyclical fluctuations is likely due to persistent industry employment patterns. For example, throughout this period, men are more likely to be employed in highly cyclical industries such as construction and manufacturing, while women are more likely to be employed in less cyclical industries such as services and public administration.

Overall, Hoynes, Miller and Schaller conclude that the labor market effects of recessions differ across demographic groups, but these differences have been present throughout much of the past forty years. Although the Great Recession is longer and more severe than earlier cycles, its impacts are quite similar.

Post May 15, 2013 @povertyresearch The Great Recession and Greater Disparities in Employment and Earnings 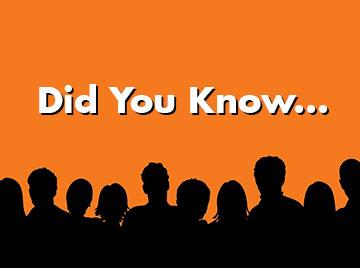 Did you know that in the Great Recession the largest increase in unemployment was among African American men?