Children are removed from their families for different reasons, but poverty and disconnection from financial support such as employment or public benefits are associated with referrals to child welfare and children being placed outside the home. Our new research[1] suggests that efforts to minimize the negative financial impact of child placement for parents have the potential to improve both the financial lives of vulnerable families and their chances for reunification.

Welfare time limits, a part of the 1996 welfare reform, changed the economic landscape for poor families. The new Temporary Assistance for Needy Families (TANF) program imposed a five-year lifetime limit on cash welfare with a focus on work. Caseloads declined and employment increased, but the number of families without work or public benefits also grew.[2] Research has found that families with an involuntary exit from TANF had a higher risk of a child maltreatment case two years later.[3]

Participation in the welfare and child welfare systems also imposes conflicting mandates. The 1997 Adoption and Safe Families Act (ASFA) put a limit on how long a family had to reunify with their removed children. It also provided incentives for states to increase adoptions.

However, having a child removed in itself may make it more difficult to maintain economic connection. Parents may have to choose between work and required child welfare meetings, appearances in court and services for substance abuse while relying on public transportation.

Our new research highlights mechanisms that drive the complex relationship between economic disconnection and child welfare involvement. Our objective was to understand how economic connection, either to benefits or employment, changes when a child is removed from a family, as well as chances for reunification.

Linked administrative data on over 15,000 primary caregivers provided three years of continuous longitudinal data. This offers the clearest picture to date of the economic trajectories of families involved in the child welfare system. Data from the Department of Social and Health Services (DSHS) covered all children entering out-of-home placement for the first time in Washington State from 2000-07. We restricted our analysis to identified birth and adoptive parents (95% of primary caregivers) and to placements lasting over seven days.

We linked these data to other administrative records with the Integrated Client Database (ICDB), a longitudinal database that draws from over 30 data systems. Caregivers are considered matched if they have any record of employment or benefit receipt in the 11 years of data (97.6% of primary caregivers). We used supplemental data on SNAP receipt to help distinguish between attrition and disconnection.

We found that the relationship between economic disconnection and involvement in the child welfare system involvement works in several interrelated ways:

About half of families in our sample experienced considerable economic volatility. These caregivers tended to be younger, have younger children and were more likely have children removed for neglect and, to a lesser extent, substance abuse. The more economically stable families were either consistently connected (35%) or consistently disconnected (13.1%) throughout child welfare involvement.

About 28 percent of mothers in the sample lived with a co-resident partner.[4] For about two-thirds of caregivers we were able to identify a potentially supporting partner (PSP), typically the child’s non-resident biological father. Although it is unclear whether PSPs provide economic support, caregivers with a connected PSP in the placement quarter were more likely to reunify (64.3%) than those with a disconnected PSP (58.7%) or without a PSP (55.5%). For those with financial instability, PSPs increased connection by as much as 20 percentage points.

Policy makers should consider the impact child removal has on a family’s financial future and its consequences for reunification. Families becoming economically connected around the time of placement suggest that child welfare may be a primary means for accessing financial support.

The combination of high unemployment and limited TANF benefits during the recent fiscal crisis was especially hard for families involved with child welfare. At greatest risk of losing children and economic connection are younger caregivers who are likely to have less experience in the workforce and with public systems. Their lives may also be more chaotic, making it more difficult to obtain employment or to meet TANF requirements.

While providing economic resources is typically beyond the scope of the child welfare system, minimizing the negative economic impact of child removal is likely to improve the financial lives of vulnerable families and their chances for reunification.

Jennifer L. Hook is an Assistant Professor of Sociology at the University of Southern California.

Jennifer L. Romich is an Associate Professor in the University of Washington School of Social Work and is Director of the West Coast Poverty Center.

Maureen O. Marcenko is the Charles O. Cressey Endowed Professor of Social Work at the University of Washington.

Ji Young Kang is a Ph.D. candidate in the University of Washington School of Social Work.

This project was funded in part by a Center for Poverty Research Small Grant. The U.S. Department of Health and Human Services/Administration for Children and Families funded data acquisition through a grant to the University of Washington West Coast Poverty Center. Partial support for this research came from a Eunice Kennedy Shriver National Institute of Child Health and Human Development research infrastructure grant, R24 HD042828, to the Center for Studies in Demography & Ecology at the University of Washington.

The authors wish to acknowledge the contributions of Partners for Our Children, the Washington State Department of Social and Health Services Research and Data Analysis Division, Children’s Administration, and the Employment Security Department.

[2] Danziger, S. K. 2010. “The Decline of Cash Welfare and Implications for Social Policy and Poverty.” Annual Review of Sociology. 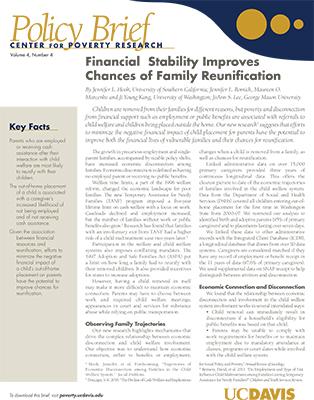