In recent years, ethnic concordance—matching the ethnicity of healthcare workers to that of their patients—has been promoted as an important measure for achieving “patient-centered care” for minority patients in the U.S.

Empirical studies have not found this to be universally true. Some studies have found ethnically concordant care to be more satisfying and communicative, and that it also makes patients more likely to use healthcare services. Other studies have found the opposite, or report mixed findings. A number of important questions remain unanswered. For example, when ethnic concordance appears to improve communication, what aspects of the relationship do patients find most helpful or empowering? When patients say they dislike ethnic concordance, how exactly are they experiencing these relationships?

This new study analyzes how ethnic concordance shapes the experiences of low-income immigrant patients. It finds that ethnic concordance can introduce unexpected problems into clinical communications. The study also indicates that in order to unblock patients’ voices, the ability to listen to and to treat patients with respect and compassion, along with the language skills for direct communication, can be more effective than simply relying on the shared cultural values assumed to exist among people of the same ethnicity.

Interviews about Patient Care
This study is part of a larger project on immigrant health in Northern California. The researchers analyzed 60 in-depth interviews conducted with low-income Vietnamese and Mexican immigrant patients with limited English proficiency (LEP) between 2006 and 2007. Interviewees were between the ages of 20 and 70, and had visited one of three major local primary care facilities at least two times, either for themselves or for their children. The study focused on low-income, LEP immigrants because they are particularly vulnerable to physician domination and are often targeted by ethnic concordance policies.

Patient-Centered Care Unavailable
Most patients in this study complained that co-ethnic healthcare providers left them little opportunity to articulate questions or concerns. Several young mothers, who had experienced pregnancy complications, stillbirths or miscarriages described how their emotional needs were overlooked even though their physical health was cared for. For example, Norma (The names of the subjects in this brief are pseudonyms), an elderly diabetic patient, was deeply frustrated that doctors at the community clinic kept prescribing insulin without remembering the eyesight concerns she expressed in previous visits.

In general, patients were dissatisfied when being objectified as a diseased body to be processed quickly through the system. In many cases, when a patient’s own treatment choices differed from that of their doctors’, they were overpowered.

Boundary Work and Co-ethnic Staff
Patients talked at length about “mean” co-ethnic staff, ranging from uncaring nurses to case workers appearing to deliberately make care unavailable. While the study’s goal is not to report “what truly happened,” these accounts illustrate what patients perceived to be important.

Patients felt that co-ethnic staff (but not co-ethnic doctors) were more likely than their white counterparts to emphasize their social distance. This kind of “boundary work” allows those in non-elite positions, such as nurses or interpreters, to achieve a sense of dignity by constructing similarities between themselves and elite groups (such as doctors) and by emphasizing their differences from dominated groups (such as low-income co-ethnic patients).

Hoang, a 56-year old Vietnamese patient with chronic kidney disease had several negative encounters with an interpreter. He said about the Vietnamese interpreter, “you know English so you don’t see anybody else as good.” He became so annoyed that he eventually refused the interpreter’s service and asked the doctor to write down the instructions so that he could ask his child to interpret afterward.

Less Intervention and Co-ethnic Providers
Patients were often frustrated with what they perceived as under-medication or under-medicalization. They also seemed to favor quick and unequivocal diagnoses and heavy-handed medical interventions. The patients’ one-sided accounts cannot tell us whether these complaints indicate bad doctoring or different but justifiable treatment plans. These stories do indicate that patients felt their providers had denied them the best that modern medicine can offer. Many felt trapped in a substandard healthcare setting.

The Vietnamese immigrant patients (but not the Mexican immigrant patients) reported that this problem was worsened by ethnic concordance. Many stated that Vietnamese American doctors were less competent, less compassionate, and less well-educated than white doctors, which, the patients believed, explained why co-ethnic doctors would not provide their desired treatments. This “racializing” by linking professional competence and ethics to race may predispose them to distrust co-ethnic doctors.

The Path to Truly Patient-centered Care
Although these empirical findings suggest that ethnic concordance tends to negatively influence patient experience, it by no means implies it is inherently destructive. While not reported by the patients in this study, it is theoretically possible that ethnically concordant clinical relationships can push back the dominating power of the medical system.

To truly listen, co-ethnic healthcare workers, like any healthcare workers, must actively engage in open-ended communication, and treat patients with compassion and respect. It is noteworthy that not a single patient in this study considered better “matching” with providers or staff (e.g., same race, same national origin, same gender, etc.) to be more important than patient-centered communication. Instead, they emphatically expressed the desire to be respected and listened to, preferably through direct communication.

Meet the Researchers
Ming-Cheng Miriam Lo is a Professor of Sociology at UC Davis. Her research interests include civil society and social movements, sociology of culture and health and illness experiences.

Roxana Bahar is a Ph.D. candidate in Sociology at UC Davis, where she completed her M.A. in 2007. In 2012, she won the Consortium for Women and Research Graduate Research Award. 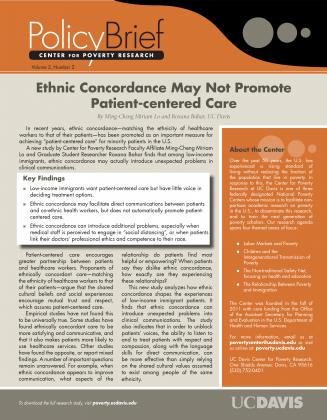 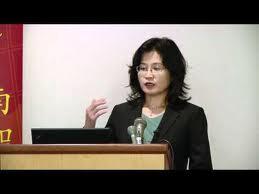