Research Paper October 26, 2016 Sign up for e-news Poverty Research and Policy in the US: Building a Path to Mobility Ann Huff Stevens

Labor Markets and Poverty in the US: Basic Facts, Policy and Research Needs By Ann Huff Stevens and Ariel Marek Pihl

The connection between poverty and labor markets is complex. High, stable wages and stable full-time employment can keep many out of poverty. However, the stagnation of wages at the bottom of the US wage distribution over the past several decades and continuing low rates of full-time work, especially in single-parent households, work will often leave families below the official poverty threshold.

What are poverty rates among workers?

The Supplemental Poverty Measure (SPM) adjusts thresholds for cost of living and adjusts family resources for the amount received in government assistance and lost to taxes and unavoidable expenses. The most recent SPM measure, for 2014 suggests that 7.6 percent of individuals working at least 27 weeks per year are poor, compared to an overall SPM poverty rate of 15.3 percent.

How much do the poor work?

Using the official US poverty definition, among the poor between ages 18 and 64 who are not disabled or in school, in 2014 51.8 percent worked for part of the previous year, though only 25.2 percent worked more than 50 weeks. Summarizing weeks and hours worked between 1990 and 2014 shows a mixed trend.

Much of this decline in full-time work is driven by weak labor market opportunities. The years after 2001 saw a downward trend in work among the poor which accelerated during the recession of 2008 and remains well below the 2008 level as of 2014.

Single parents are also more likely to be in poverty, even if they’re working. The poverty rate among single-parent families is 26 percent. In 2014, having a parent working at least 27 weeks reduces the chances of poverty to 12 percent.

Poor single parents are 30 percent more likely to be working in 2014 than in 1990. This increase is concentrated in full year employment in both part-time and full-time work. Compared to the full population, the fraction of single parents who did not work at all in the previous year fell from nearly half in 1990 to just over one-third by 2014. This increase likely reflects the strong economic expansion, but also welfare reform, which emphasized work attachment, imposed work and other requirements for single parent welfare participants.

Are wages or jobs the problem?

Whether employment status reflects supply or demand factors remains a question. Poverty is substantially higher in states where wages at the bottom of the distribution are lowest. Poverty rates are nearly five percentage points higher in the lowest-wage states compared to states with wages in the middle.

The level of wages is clearly a factor. Between 1990 and today, most American workers have seen their wages stagnate or decline.[2] Between 2000 and 2013 the bottom decile’s wages declined by an average of 0.1 percent each year, a loss of $0.16 per hour in real terms. All else equal, the poverty rate would be roughly 1.5 percentage points lower (12%) if people worked as much as they did in 1999.[3]

While more hours worked and higher wages are effective at reducing poverty, it is also important to recognize that jobs with irregular and inconsistent hours are much more likely to be low wage jobs compared to full-time work. At both the 20th and 50th percentile of earners in each group, FT-FY workers earn twice as much per hour as those who only worked part time for part of the year.

There are also, undoubtedly, demand factors. Unemployment and involuntary part-time work have been elevated since the Great Recession and remain well above historic levels. The number of discouraged workers who have given up on searching for work and those who work part time but would prefer full-time 10.4 percent in 2015, more than two percentage points higher than its 2007 level.

Policies that may work

In theory, subsidized employment programs can provide work experience, reduce long-term unemployment, and thus promote more stable incomes and stronger labor force attachment among workers. Evaluations of these kinds of programs in the US and Europe have found mixed results that include sizable increases in income and employment, though not for all.

A recent example of subsidized employment in the US was funded in 2009 through the American Recovery and Reinvestment Act (ARRA). Under this program roughly 260,000 jobs were subsidized by $1.3 billion in funding by 39 states and the District of Columbia.[4] An evaluation by the Economic Mobility Corporation (EMC) found that those who were placed in subsidized jobs earned $2,500 more than those that didn’t in the year after the program ended.[5]

The EITC has become, by many accounts, one of the largest programs in terms of dollars spent to support poor or near-poor families. In addition to increasing family income, research has shown that the EITC improves infant health and children’s academic achievement. Currently 27 states offer state-specific EITCs, almost all of which are additions to the federal EITC. These range from 3.5-85 percent of the federal credit, with a median of 12.5 percent.

The combination of increasing after-tax income near the bottom of the earnings distribution and the apparent net positive effect on labor supply means that the EITC has measurable effects on poverty when we consider after-tax income. A 2015 study shows that a $1,000 increase in the EITC is associated with a nine percentage point reduction in an after-tax and-transfer poverty measure.[6]

Minimum wage policy in the US remains controversial in both the policy and research realms. Adjusted for inflation, the real value of the federal minimum wage, now at $7.25 per hour, is currently at 67 percent of its peak value in 1968.[7] From a policy perspective, the key arguments over raising the minimum wage focus on whether they may do more harm than good by burdening businesses and potentially discouraging employment. A 2010 study finds that a ten percent increase in the minimum wage increases employment by less than one percent.[8] A 2014 study suggests that the same increase lowers employment by 1.5 percent.[9]

A four-year college degree remains one of the strongest predictors of who will escape poverty. Unfortunately, progress at increasing rates of graduation from college has been very slow. Alternative educational opportunities, including both short-term employment and training programs and associate degrees and certificates in vocational areas are more frequently mentioned as potential avenues to improve the earning of the poor.

Employment and training programs for disadvantaged workers is the most direct approach to improving earnings. These programs—and their effectiveness—can differ substantially in terms of their length, intensity, industry or skill focus, and target population. A 2014 study notes that programs which are able to combine skill development and paid employment seem to offer the best outcomes.[12]

Most relevant to the population of the poor already working is recent attention to vocational education, or career technical education (CTE) programs. A 2014 study of Kentucky community college students found sizable returns overall.[13] A 2015 study of mine found that California community college CTE programs increase earnings by approximately 25 percent.[14]

One concern is enrollment capacity. A 2015 study on a two-year nursing program in a California community college found that there are roughly ten applicants for every seat in the program.[15] Many individuals wait up to two and half years to enroll. Many other vocational programs also have substantial requirements for enrollees and very low persistence and completion rates.

Subsidized employment to help the unemployed:

Unprecedented levels of long-term unemployment during and after the great recession have led to renewed interest in understanding whether long-term unemployment can itself reduce the chances of later labor market success. We should understand whether subsidized employment programs, by helping individuals avoid long periods of joblessness, can have long-term positive effects on worker outcomes.

How scheduling affects employment and earnings for low-wage workers:
Our understanding of these challenges is quite new, but studies of how scheduling rigidity, predictability, or instability are correlated with workers’ long-term employment prospects or earnings growth could be a major contribution. A related set of questions, with even larger data and design challenges, is that of whether and how companies and their financial health or profitability are affected by these practices or by changes to more worker-friendly scheduling practices.

A focus on improving work conditions for low-wage workers also requires us to recall the marked rise in labor force participation over the past two decades among poor single parents. This puts a premium on renewing our understanding of the challenges such workers face in finding affordable, high-quality childcare, and other work-supportive services.

Future research on the EITC should combine findings on its overall effects on poverty and other measures of well-being in the longer term, including labor market attachment and earnings. State-level EITC programs may offer another important avenue for researchers to understand and utilize in studies.

One direction for future research is prompted by recent local ordinances in which specific cities or parts of cities impose higher minimum wages than the balance of the state. Because local policies leave additional margins for workers and firms to escape the minimum, economic theory predicts that local measures could have larger unintended or negative effects on employment. It should be a high priority to use variation in local policies to learn how local minimum wages may differ in their impacts on employment and poverty than state- or national-minimum wages.

We need to better understand which individuals are most likely to successfully complete specific vocational programs, and what factors make it unlikely that others will persist and complete vocational programs. We also need to better understand how individuals choose enrollment in particular programs, and whether capacity constraints in the most promising programs prevent access. Finally, as many of the working poor may be able to take only a few CTE classes given their need to work, it is important to understand whether the accumulation of a few vocationally focused courses can have any meaningful effect on future employment or earnings, and in which fields this is most likely to occur.

Ann Huff Stevens is Director of the Center for Poverty Research at UC Davis, Professor in the Department of Economics, and Interim Dean of the Graduate School of Management. She studies low income workers and labor markets, the incidence and effects of job loss, connections between economic shocks and health, and poverty and safety-net dynamics. Stevens previously served on the faculty at Rutgers and Yale Universities and is a faculty research associate with the National Bureau of Economic Research. She received her Ph.D. from the University of Michigan in 1995 and has served as an investigator on numerous grants from the National Science Foundation and other agencies. Stevens’ current research includes studies of the relationship between job loss and health, the relationship between aggregate unemployment rates and mortality, and the returns to technical and vocational education.
Contact: annstevens@ucdavis.edu

Ariel Marek Pihl is a Ph.D. candidate in the Department of Economics at UC Davis.

[1] All rates are calculated using the Annual Social and Economic
Supplement to the Current Population Survey.

[3] Authors’ analysis of the 2015 Annual Social And Economic Supplement to the Current Population Survey (IPUMS-CPS, University of Minnesota, www.ipums.org).

[12] Edelman, Peter B., and Harry J. Holzer. 2014. “Connecting the Disconnected: Improving Education and Employment Outcomes Among Disadvantaged Youth.” In What Works for Workers?: Public Policies and Innovative Strategies for Low-Wage Workers.

Research Paper October 26, 2016 Sign up for e-news Poverty Research and Policy in the US: Building a Path to Mobility Ann Huff Stevens
Pod November 15, 2013 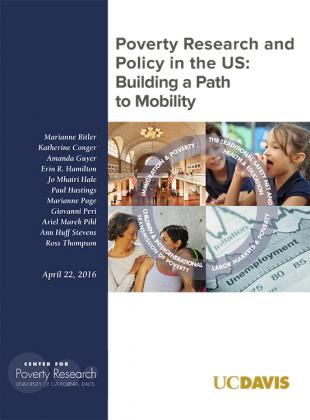