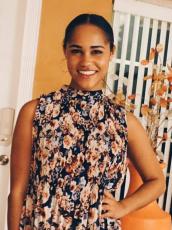 Natalia Cooper will graduate summa cum laude, Phi Beta Kappa from Howard University in May 2019 where she studied Economics and Political Science. She represented Howard University at Harvard’s 2017 National Campaign Conference, served as Secretary of the HUSA Policy Board during the 2017-2018 school year, and traveled to China as a member of the Sixth Class of Howard’s Freshman Leadership Academy. While a student, she interned with two U.S. Senators, worked on the research team at the Council of the Great City Schools, and worked on election and issue advocacy campaigns. Natalia also served as a fellow for the Spotlight on Poverty project for two years. She plans to pursue a PhD in Social Policy and build a career solving inequity issues in the United States.