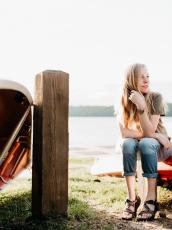 Uninsurance for young adults (YAs) was greatly reduced by the Affordable Care Act (ACA). But were federal health reforms since 2010 equally beneficial for all YAs? Did certain policies exacerbate, rather than resolve, preexisting disparities in health-insurance coverage? In a recent study, using a nationally representative sample of more than 350,000 participants, we investigated inequalities in YA insurance coverage before and after federal health reforms, including the expansions of dependent coverage, Marketplaces and Medicaid. We found that, while the dependent coverage provision of the ACA increased YA insurance coverage, these gains were not of equal magnitude for all YAs, with some—particularly those with lower socioeconomic status—experiencing less beneficial results. Such disparities suggest that future policy should aim to ensure optimal and equitable access to high-quality, affordable insurance for all YAs, regardless of their circumstances.

​Since the implementation of the Patient Protection and Affordable Care Act (ACA) in 2010, the overall uninsured rate in the United States decreased to an all-time low. By 2016, the uninsured rate among all Americans dropped to 9 percent, and to 10.4 percent for those under the age of 65.[1] As YAs (ages 19–25) traditionally experienced the highest rates of uninsurance compared to both younger and older counterparts, the ACA included specific provisions to address the unique coverage needs of YAs.[2,3] The dependent coverage expansion provision (DCE), which allowed young adults to remain on their parents’ insurance plans until they turn age 26, led to a decrease in the number of YAs without health insurance.[4] It also allowed many YAs to obtain employer-sponsored insurance (ESI) coverage.[5]

However, in the years since the ACA has been implemented, it is unclear if coverage has improved equally for all YAs—in particular, for those of lower socioeconomic status (SES) who may be less likely to benefit from such policies. We thus set out in our study to investigate inequalities in health-insurance coverage among YAs pre- and post-implementation of specific provisions of the ACA.[6] We also sought to quantify disparities among vulnerable subgroups such as racial/ethnic minorities.

We drew on data from the National Health Interview Survey (NHIS). Our sample included 387,635 adolescents/young adults, ages 13–30 years, who were interviewed in one of 17 NHIS years, from 2000 to 2016. NHIS respondents report their current health insurance coverage at the time of the survey. They then answer detailed questions about each coverage type and duration of coverage during the past 12 months. We created several summary measures of insurance coverage during the past 12 months, including time with and type of coverage. We further investigated the type of coverage by source (e.g., employer-sponsored insurance, insurance obtained through the health insurance exchanges, Medicaid, etc.) and reasons for lack of insurance among those without coverage at the time of the survey. We evaluated the magnitude of policy effects on employer-sponsored coverage generally and that provided specifically to a dependent beneficiary. We treated insurance obtained through Marketplaces as non-group market coverage.

We also compiled data on several sociodemographic characteristics, including sex, detailed race/ethnicity, citizenship status and others. We then used a difference-in-differences estimator to determine federal policy effects on insurance coverage for YAs (ages 19–25) compared against both adolescents (ages 13–18) and older YAs (ages 26–30) separately. We also evaluated the extent to which the magnitude of policy effects varied by these sociodemographic characteristics.

Some Disparities Narrowed, While Some Widened

We found a 12.3 percentage-point increase in full-year coverage post-ACA for YAs compared to older counterparts. This was driven by increases in employer-sponsored private insurance while younger and older youth saw larger gains in Medicaid coverage. Males saw greater improvements in full-year insurance than females, helping to close the prior gap in coverage. But other subgroups—including lower SES, non-citizens, non-English speakers, and several racial/ethnic minority groups—experienced less beneficial DCE effects. 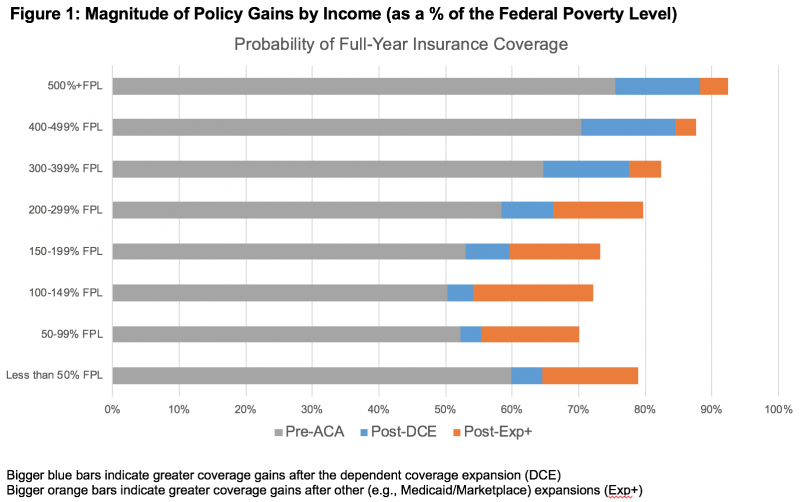 Future Reforms Should Seek Equal Coverage for All

During a period of substantial federal health reform, groups at peak risk for “falling through the cracks” exhibited substantial absolute gains in insurance coverage. Nevertheless, some policy gains were not uniform across groups. Rather, we found widening inequities in private coverage for minority YAs, non-citizens, YAs speaking English as a second language, those without a college degree, and YAs in families making less than three times the federal poverty level. The inequities we observed for American Indians and Alaska Natives and other minorities are particularly concerning, as these groups may experience worse rates of coverage because of both their race/ethnicity and their socioeconomic situation—further compounding already precarious access to coverage.

Later ACA reforms, including Medicaid and Marketplace expansions, appear to be critically important for providing alternative coverage sources for vulnerable YA groups and mitigating inequities that grew with DCE. Our findings suggest that continued attention and advocacy regarding new and remaining disparities, particularly among socioeconomically vulnerable and minority YAs, is essential. Policy modifications and public-health outreach should aim to ensure optimal and equitable access to high-quality, affordable coverage for all YAs.