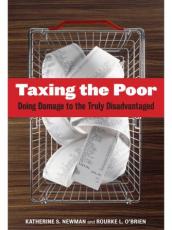 In this May 2012 seminar, Visiting Scholars Katherine S. Newman and Rourke O’Brien discuss the way we tax the poor in the United States, particularly in the American South, where poor families are often subject to income taxes, and where regressive sales taxes apply even to food for home consumption.

Katherine S. Newman, is a widely published expert on poverty and the working poor and an experienced academic administrator; she joined Johns Hopkins in September 2010 as the James B. Knapp Dean of the Krieger School of Arts and Sciences. She has served on the faculties at Harvard University, Columbia University and the University of California, Berkeley.

Rourke L. O’Brien is a graduate student in sociology and social policy at Princeton University and a non-resident fellow of the New America Foundation. He achieved his BA in Social Studies from Harvard University. Rourke’s interests include poverty, domestic and comparative social welfare policy, and wealth inequality.