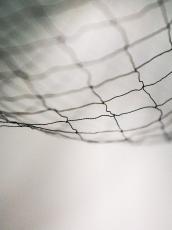 Living in “deep poverty” means living on an income less than half the official poverty threshold, or, for a family of three in 2017, living with annual income of less than $9758. According to the U.S. Bureau of the Census, 18.5 million individuals in the United States—5.7 percent of the population—lived in deep poverty in 2017. At such low levels of income, it may be particularly important to understand for how long individuals continue to live in deep poverty. My recent study investigates the long-term persistence of deep poverty. While most spells of deep poverty in the U.S. are short, with two-thirds of individuals who fall into deep poverty exiting in two years or less, re-entry is also common. Indeed, depending on race and family structure, individuals beginning a stay in deep poverty will on average spend between 2.2 and 4.7 years in deep poverty over the next decade. Adding common in-kind and tax-related benefits to the definition of income reduces the average time in deep poverty to 1.7 to 3.5 years out of the next ten.

To answer questions about the persistence of deep poverty, I used data from the Panel Study of Income Dynamics (PSID), focusing on the survey years 1985 through 2015. The PSID collects detailed information on family income and its components, and on family composition and changes in family composition over time. It offers uniquely valuable data for anyone studying the persistence of deep poverty over the long term.

Exits from Deep Poverty Occur Quickly, But Are Rarely Permanent

Among those beginning a stay in deep poverty in the U.S., 59 percent escape deep poverty after only a single year. Using an expanded definition of deep poverty that counts in-kind assistance and tax credits as income (but maintains the official poverty thresholds), I found that 68 percent of those falling into deep poverty escape after just one year.

Variation by Race and Gender of the Head of Household 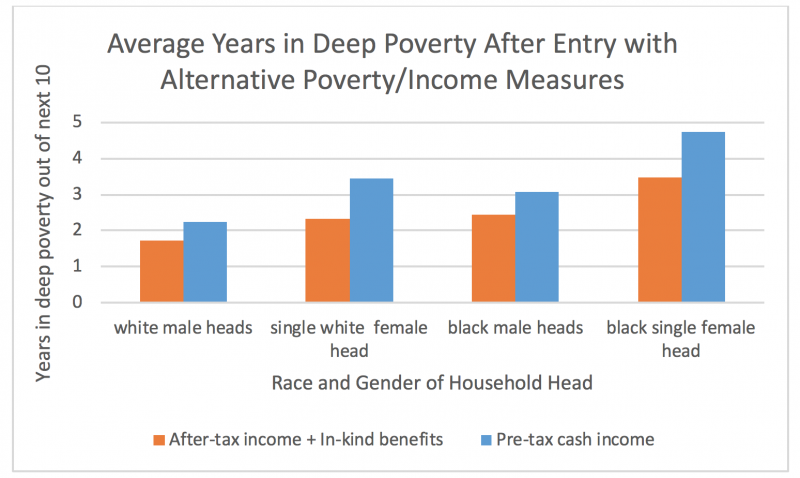 Powerful Role of the Safety Net

The figure also shows an analysis of persistence if we add major in-kind benefits and refundable tax credits to our definition of income for determining deep poverty. When these additional resources are counted as household incomes, time spent in deep poverty falls. Total years in deep poverty for those beginning a spell in deep poverty under this definition range from 1.7 to 3.5 years out of the next ten.

While these calculations do not speak to potential behavioral responses of the safety net—the idea that the presence of safety-net programs may alter an individual’s behavior and income in a variety of ways—they do show an important role for the safety net in protecting against long-term deep poverty.

Regardless of the income definition used, deep poverty is commonly a persistent state. Most of those escaping a stay in deep poverty will return within the next few years. By understanding and quantifying the extent to which it persists, we can better identify characteristics that might predict chronic deep poverty in the U.S. While deep poverty is a relatively rare occurrence, it is far more likely among children, single-parent families, and racial minorities. Indeed, the duration and frequency of these spells varies by demographic. Fully half of those in long-term deep poverty are children and more than two-thirds are single-female headed households. The likelihood that such chronically low income has lasting effects on children suggests that effective efforts to address chronic deep poverty would be particularly beneficial.

Ann Huff Stevens is a Professor of Economics at UC Davis and the Deputy Director of the UC Davis Center for Poverty Research.