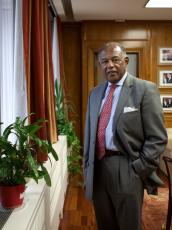 RICHMOND, Va. — Dressed on an unseasonably warm day, as ever, in a tailored suit, tie and pocket square, Mayor Dwight C. Jones, a fourth-generation pastor, arrived at a late-afternoon meeting this month to talk about his ambitious — some say quixotic — plan to subdue poverty in this city, once the capital of the Confederacy and now one of the nation’s poorest urban areas.

Many Richmond residents live in public housing, but the mayor has been promoting mixed-income communities.

“If this is something we can’t do,” he said, glancing around the room at members of one of the city’s seven antipoverty task forces, “we don’t deserve to be here.”

The plan, on which he is staking both his political capital and legacy, has the general support of the City Council but is making others jittery, rich and poor alike.