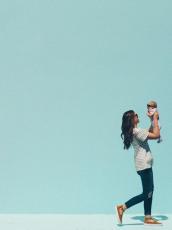 The Special Supplemental Nutrition Program for Women, Infants, and Children (WIC) serves more than one-quarter of pregnant and postpartum women in the United States. In October 2009, the WIC food package underwent revisions to improve nutritional content. In a recent quasi-experimental study of more than two million California infants, we investigated the extent to which those revisions—which increased access to whole grains, fruits, vegetables, and low-fat milk—resulted in improvements in maternal and infant health. We found the revised WIC food package to be associated with reduced maternal preeclampsia and gestational weight gain, as well as improved infant gestational age and healthier birth weights. Our findings suggest that improving pregnant women’s nutrition may be an important target of clinical interventions and health policy.

Maternal nutrition is an important determinant of fetal development.[1] Evidence points to the long-term effects of fetal programming—the environment surrounding the fetus as it develops in utero—on children’s health.[2] This is likely due to changes in fetal hormones, metabolism, and other physiologic processes. The transmission of disadvantage during pregnancy may explain the intergenerational persistence of health disparities in the United States.[3]

Intended to reduce such disparities, WIC is a federal program for low-income pregnant and postpartum women and children younger than five years. It provides nutritional support, nutrition education, breastfeeding support, and referrals to health and social services to more than a quarter of pregnant and postpartum women in the US.[4] The program has a proven track record of success. For example, its introduction in the mid-1970s resulted in higher birth weights, particularly for less-educated mothers. Similar findings have emerged in more recent years.[5]

In October 2009, after criticism that the standard WIC food package had been essentially unchanged for more than 30 years, the US Department of Agriculture implemented major revisions to the program.[6] The revised food package, which included more whole grains, fruits, vegetables, and low-fat milk, was intended to be more nutritious, thereby addressing obesity and chronic disease. This revised package increased household expenditures on whole grains and decreased purchasing of refined grains and whole milk among WIC recipients.[7] It also led to improvements in maternal and child nutrition.

In our study, using data from more than two million births in California, we examined whether the revised WIC food package also affected perinatal health.[8] Specifically, we compared pre-post policy changes among WIC recipients with pre-post changes in a control group of nonrecipients. This enabled us to estimate the associations of program revisions with outcomes such as birth weight.

Analyzing Outcomes Before and After the Revised WIC Package

We used data from January 2007 to December 2012 from the California Office of State Health Planning and Development database. This database contains linked birth certificates and hospital discharge records for mothers and infants from one year before birth to one year after birth. We included California singleton infants live-born from 2007 to 2012 with a gestational age of 20 to 44 weeks at delivery. The final sample included 2,897,537 infants born to 2,441,658 mothers.

In designing our analysis, we selected maternal and infant outcomes that could be affected by the mother’s receipt of the revised food package. Maternal outcomes included whether the mother was diagnosed as having preeclampsia or gestational diabetes. We also calculated whether the mother gained less weight, more weight, or was within recommended gestational weight gain (GWG) according to guidelines from the Institute of Medicine (now the National Academy of Medicine). To account for sociodemographic variables, we adjusted models for mother’s education, age, race/ethnicity, and parity and infant’s sex and year of birth.

The revised WIC food package was intended to improve maternal nutrition by providing more whole grains, fruits, vegetables, and low-fat milk. We found improvements in perinatal health, including maternal preeclampsia and weight gain, gestational age, and appropriate birth weight for gestational age. In several cases, the magnitude of the findings represents a clinically meaningful change, which is likely to have a substantial impact at the population level. For example, the reduction in preeclampsia of 0.6 percentage points represents a 17 percent reduction from a base of 3.5 percent. For infant-health outcomes, effect sizes were more modest perhaps because these represent outcomes further downstream from the primary intervention. Nevertheless, these findings suggest improved maternal nutrition translated into improvements in newborn outcomes.

Overall, revisions to improve the nutritional content of the WIC food package in October 2009 were associated with improvements in maternal and infant health at the population level, with inconsistent differences by race/ethnicity. Given that WIC is among the largest safety net programs for vulnerable families in the US, with more than a quarter of pregnant and postpartum women receiving it, our findings should be incorporated into future cost-benefit analyses of the program. They suggest that social policy may be an important lever to reduce health disparities, and strengthen the evidence for improving maternal nutrition during pregnancy.

Laura L. Jelliffe-Pawlowski is an Associate Professor of Epidemiology at UC San Francisco.