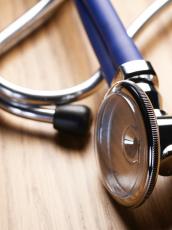 Medicaid covers more than 72 million enrollees and represents over $500 billion in government spending annually. But does it improve the health of its beneficiaries? In a recent study, we investigated the relationship between Medicaid enrollment and mortality. To do so, we compared changes in mortality for near-elderly adults with low incomes in states that did and did not expand Medicaid eligibility through the Affordable Care Act. We found a decline of 0.132 percentage points in annual mortality associated with Medicaid expansion for this population. This effect, driven by a reduction in disease-related deaths and growing over time, suggests that Medicaid expansion saved lives in the states where it occurred, and cost lives where it did not.

Low-income individuals experience dramatically higher mortality rates and worse health outcomes than the general population. For example, the annual mortality rate for individuals ages 55 to 64 in households earning less than 138 percent of the Federal Poverty Level (FPL) is more than four times higher than the rate experienced by higher-income individuals of the same age. Members of this low-income group are also more like to die from diabetes, cardiovascular disease, and respiratory disease. These higher rates of death translate to dramatic differences in life expectancy across income groups. For example, men at the bottom of the income distribution live on average for nearly 15 fewer years, and women more than 10 fewer years, than those at the top of the income distribution (conditional on surviving to age 40).[1] This correlation is stronger in the United States than other high-income countries.[2]

Established in 1965, the Medicaid program is the largest health-insurance provider for low-income individuals in the United States. In 2014, the Affordable Care Act (ACA) expanded eligibility for Medicaid to include alladults in families with incomes under 138 percent of the FPL. (Previously only pregnant women, adults with disabilities, and very low-income parents tended to qualify.) Although intended to apply to all states, a Supreme Court decision made the expansion optional. As a result, only 29 states and the District of Columbia expanded coverage in 2014, with seven additional states electing to expand over the next several years. Overall, approximately 13.6 million adults gained Medicaid coverage under the ACA.[3]

If Medicaid improves access to effective medical care that beneficiaries would not otherwise receive, it could play a crucial role in reducing disparities of the kind described above. Coverage provided by the program leads to earlier detection and treatment of life-threatening health conditions. It also increases the number of hospitalizations, procedures performed in the hospital, and the number of emergency department visits for conditions that require immediate care,all of which are likely to be associated with serious medical issues that require treatment.[4][5] Furthermore, researchers have noted a substantial increase in prescription-drug utilization under the ACA Medicaid expansions.[6] In short, Medicaid improves low-income individuals’ ability to access to adequate medical treatment.

Examining Mortality Before and After Medicaid Expansion

The variation in state adoption of the ACA Medicaid expansion gave us an opportunity to compare changes in mortality among individuals in expansion and non-expansion states. The data we used included detailed survey measures collected from the 2008 to 2013 years of the American Community Survey (ACS). This large-scale national survey contains approximately four million respondents in each year, allowing us to observe information on specific characteristics that determine Medicaid eligibility: income, citizenship status, and the receipt of other social assistance. With this information, we were able to identify individuals who were most likely to benefit from the ACA Medicaid eligibility expansions.

We focused on those in this group who were between the ages of 55 and 64 in 2014, who were at greater risk of mortality. We followed individuals in our sample over time to examine changes in mortality associated with Medicaid expansion by linking them to the Census Numident file. This file contains administrative records on the date of death for all individuals with Social Security Numbers who die in the United States. It allowed us to observe mortality rates for our sample through 2017, four years after the initial ACA Medicaid eligibility expansions. Because the Census Numident file does not include cause-of-death information, we further examined changes in mortality by the underlying cause of death using data from the Mortality Disparities in American Communities project.

The Census Numident and ACS data are linked via the Census Bureau’s Personal Identification Validation System. This system assigns individuals in each dataset a protected identification key, an anonymized identifier that allows Census to track individuals across datasets. Once these data were linked, we observed the vital status of each individual during the year they responded to the ACS and then each subsequent year. Finally, to assess the validity of our empirical approach, we conducted several placebo tests. 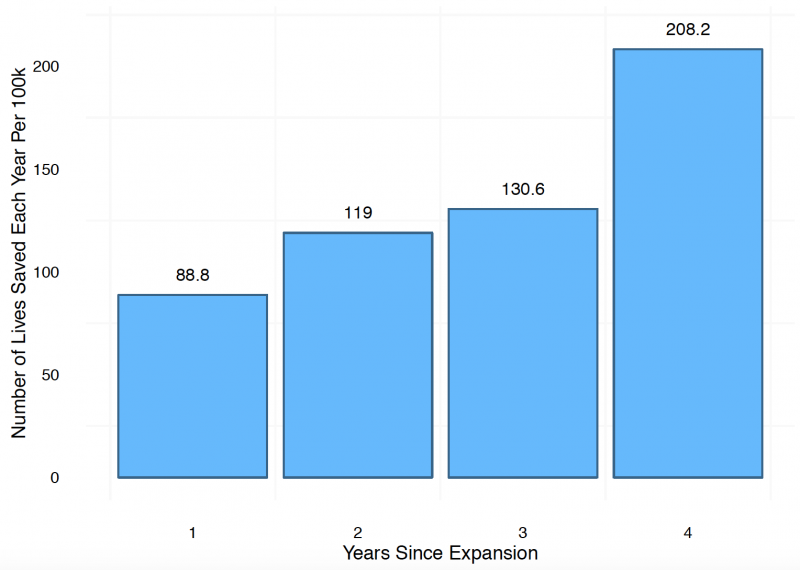 Medicaid Is a Matter of Life and Death

These results show that the Medicaid expansions brought about by the ACA substantially reduced mortality rates among those who stood to benefit the most from expansion. Relatedly, they enable us to estimate that approximately 15,600 deaths in non-expansion states would have been averted had Medicaid expansions been adopted nationwide as originally intended by the ACA. Our study thus provides compelling new evidence that Medicaid coverage reduces mortality rates among low-income adults, proving that Medicaid expansion works for the states that adopt it. The considerable ongoing cost to non-adoption should be relevant to both state policymakers and their constituents.

Sarah Miller is an Assistant Professor of Business Economics and Public Policy at the University of Michigan Ross.

Sean Altekruse is an Epidemiologist at the National Institutes of Health.

Norman Johnson is a Mathematical Statisticianat the U.S. Census Bureau.

Laura R. Wherry is an Assistant Professor in the David Geffen School of Medicine at the University of California, Los Angeles.

[6] Ghosh, A., K. Simon, and B. D. Sommers (2019, January). The Effect of Health Insurance on Prescription Drug Use Among Low-Income Adults: Evidence from Recent Medicaid Expansions. Journal of Health Economics 63, 64-80.