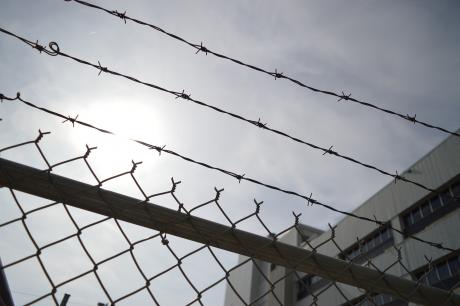 Incarceration in the United States has a serious impact on families and on children. Incarcerated adults have children at nearly the same rates as the non-incarcerated population, and children living in families with an incarcerated parent are more likely to experience certain hardships.

The U.S. incarcerates more people than any other country in the world. Current incarceration rates in the U.S. are about five times higher than in the early 1970’s.

Incarceration is most common among young men, particularly black men, and men without high school diplomas.

Over half of those incarcerated in 2012 had no earnings before entering prison, and the average earnings for those who were working was $12,780 (just above the poverty threshold for a single person).

As incarceration  has  increased,  so  has  the  number  of  minor children  who  have  an incarcerated parent.[4,5]

Incarcerated adults report having children at almost the same rate as the non-incarcerated population. In 2007 (the last year a survey was conducted), approximately 2.3 percent of children (0.9 percent of white children and 6.7 percent of black children) in the U.S. had a parent in prison.

Mirroring patterns for adults, children in families with incomes below the poverty line are three times more likely to experience parental incarceration. Non-white children and children whose parents did not finish high school are also at higher risk of having a parent incarcerated. Over the course of their childhood, approximately one in four black children and one in 25 white children (among a cohort born in 1990) experienced parental incarceration at some point during their childhood.

Incarceration of a parent is often a substantial shock to the child’s home and family life.[4]

Paternal  incarceration  is  associated  with  worse  outcomes  for children  on  average.[5]

Incarceration of a father inhibits his ability to financially contribute to the household. Families with an incarcerated parent are more likely to experience homelessness and food insecurity, and they are more likely to receive public assistance. Children of incarcerated fathers exhibit increased attention difficulties and decreased cognitive skills, which contribute to lower levels of school readiness. One exception is children whose fathers are incarcerated due to a violent offense. For these children there are no observed increases in behavioral problems.

Maternal incarceration is less common, less studied, and we know less about its effects on children.[2]

Unlike children of incarcerated fathers, children whose mothers are incarcerated usually end up living with a non-parent family member or in foster care. These children may be at increased risk of grade retention, but there is little evidence that maternal incarceration affects children’s standardized test scores.

Major surveys do not include the incarcerated or ask about former incarceration, making it difficult to understand the full extent of the impacts of incarceration.

Few surveys ask about incarcerated parents outside of smaller surveys or case studies. 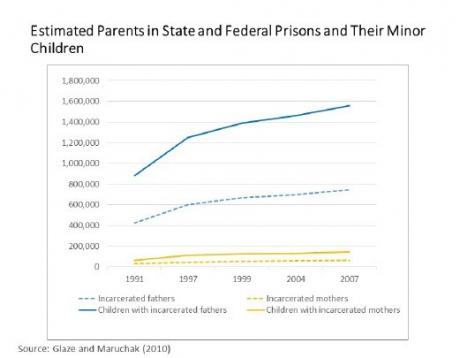 3. Adam  Looney  and  Nicholas  Turner.  “Work and Opportunity Before and After Incarceration.” Washington, D.C., The Brookings Institution. 2018.