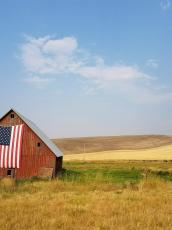 Because of large acreages, sparse populations, and distinct sociopolitical dynamics, many rural communities are beginning to assemble their own sets of economic indicators to fit unique policy agendas. In a recent paper, we reviewed over thirty years of practical efforts from six regions that created economic development reports. These reports cover only 60 percent of non-metro counties in the US, with more than half having been issued in the last five years. This review produced interesting implications for how practitioners and researchers conceptualize the creation of wealth in rural areas. It led us to identify best-practice approaches to the creation of rural economic indicator reports, especially where data can be tailored precisely to rural areas. It also cemented our belief in the importance of centering community voices and stories in the pursuit of more equitable policy outcomes.

Though rural areas cover 96 percent of the US land area, they are home to less than one-fifth of the US population.[1,2] While policy objectives for urban stakeholders often focus on population growth, many rural areas prioritize land preservation over development in order to increase agricultural economic vitality and bolster visitor-ship to natural and scenic areas.[3] Even where policy objectives are similar to urban areas, challenges faced by rural areas often require different policy approaches. For example, an economic development strategy designed to increase the population of a rural area may inadvertently develop the community out of its rurality or agricultural land.

Rural indicator reports based on socioeconomic indicator sets have traditionally dovetailed with federal initiatives to boost rural economic development. We focused this study on regional reports that were not limited to a single jurisdiction (city or county). This regional approach often emphasized cooperation in defining and delivering mutually beneficial policy approaches. For example, several counties may work together to pass new energy regulations or attract investment. In general, indicator reports help to define not only needs, but to benchmark policy progress, and emphasize politically feasible objectives and input from community stakeholders. This approach has been aided by federal- and state-level efforts to collect and make publicly available new datasets pertaining to the economy, populations, agriculture and the environment.

In our study[4], we used a content-analysis approach to review 17 rural indicator reports covering regions including the Central Valley of California, the Southern Black Belt, Appalachia, the Great Plains, and others. All reports were created on behalf of regional development commissions by academic researchers with input from policymakers and community stakeholders. In every case, the reports used retrospective data to analyze prior trends with the intention of influencing future policies.

We found that the regional indicator reports organized their findings according to different ‘capitals’. These were human; education; health; cultural and socio-political; built environment; financial; and natural. These categories have important implications for rural economic development. The human element was primarily covered by population data, while education got the greatest attention. Food insecurity was the main focus in terms of health, as were low-income and minority populations in the cultural and socio-political realm. This ties in closely with financial capital given that, as large racial and ethnic wage gaps remain in the US labor market, identifying wage differences between race and ethnicity is important to determine levels of inequality in a region. Regarding the built environment, we noted an emphasis on transportation (roads or freight traffic), broadband access and use, and number of businesses, with a focus on energy infrastructure notably absent. 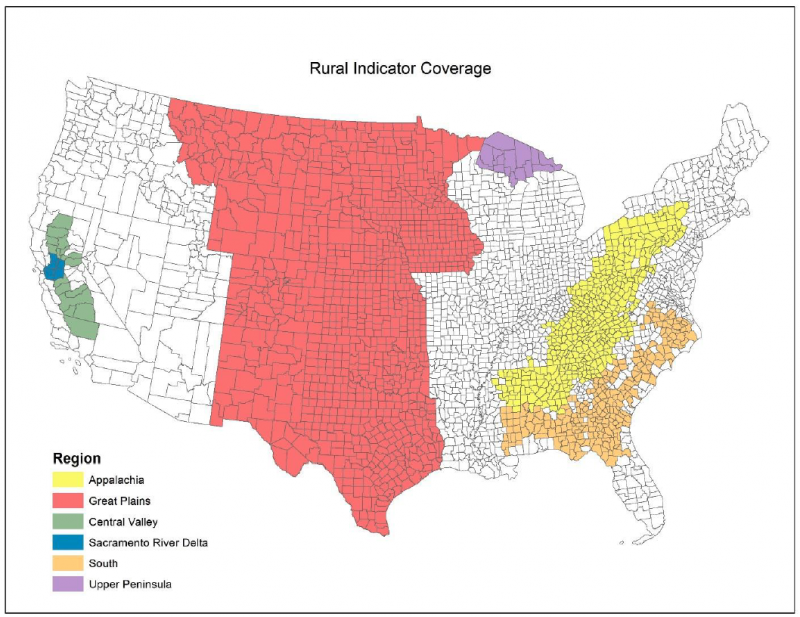 As shown above, the rural indicator reports we studied expanded their assessment far beyond financial capital to benchmark their regions’ other capitals, such as human and cultural. This is useful because communities depend on investment from a broad range of capital assets to generate rural wealth. The full suite of indicators used across regional reports points to unique policy levers and funding supports that can exert impact across multiple indicator categories. In addition, data from multiple sources helps verify trends in reports by offering supporting evidence.

We identified room for additional report making, national comparisons and replication of efforts over time. We noted that triangulation of data is important, as is the inclusion of important variables that shape and explain wealth, such as spatial proximity and race. Publicly available datasets that are made available yearly, or every five years, allow for timely, dependable statistical measurement at regular intervals.

There is also ample room to expand the discussion surrounding economic development policy objectives in rural communities. This can be achieved through the creation of more rural report series that can cover new territory or update existing reports to incorporate new and more spatially-explicit data tailored to rural landscapes. Report replication is important for tracking policy progress and impact, but such effort is also contingent on additional funding and continuity in regional policy directives.

Economic development indicators operate at the crosshairs of policy and practice. To better inform rural economic development, it would help if rural indicators could be spatially distinct from nearby urban areas. This would allow regions to isolate rural development policies and trends from those of the urban areas embedded within the regional landscape. Increased federal, regional and local attention can alter rural futures and support growth in capacity for rural planning. Finally, we believe that centering community voices and stories in report formation is crucial to achieving more equitable policy outcomes.

Catherine Brinkley and M. Anne Visser are both associate professors of community and regional development at UC Davis.

Catherine Brinkley is a Professor of Human Ecology and Director of the Center for Regional Change at UC Davis. With a PhD in city and regional planning, a veterinary medical degree, and a masters in virology, her research focuses on health and design; urban planning; legacies of urban policy with regard to race and income; and the long-term impacts of food, energy and water infrastructure siting decisions.