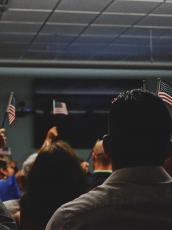 Though immigration policymaking has traditionally occurred at the federal level, it is increasingly prevalent at sub-national levels, too. In a recent study, we examined the adoption of these policies at the county level in the United States. Specifically, we considered the implementation of migrant labor market regularizations (LRs) between 2004 and 2014. LRs affect aspects of migrant workers’ status in labor markets and include laws and ordinances related to anti-solicitation, language access, local enforcement of federal immigration law, and employment verification. We analyzed data from over 5000 LR policies across 2959 counties to explore the social, economic, and political factors that influenced their adoption. We found that local poverty rates, the racialization of immigration discourse linked to the presence of large Latino populations, and policy behaviors at the municipal and state government levels were all influential. These findings have implications for policy debates related to the geography of immigration regularization, migrant socioeconomic integration, and socioeconomic stratification in the US.

Local governments are becoming more active players in managing migrant integration, service provision, and immigration policing and control.[1,2] Such local policy actions seek to regulate socioeconomic opportunities afforded to migrants in ways that depart from, or seek to strengthen, existing laws and policies. They include a growing number of LRs, which “regularize” the migrant labor market by promoting or restricting the labor market and economic integration of irregular migrants. These LRs include policies aimed at influencing opportunities for irregular migrants to obtain identification cards, to work legally as independent contractors, as well as to receive employment and training materials in their primary language. LRs are a particularly active policy domain for county-level governments in the United States and since 2005, 2959 out of the total 3007 counties in the country have implemented some type of LR.[3]

LRs are best understood as a mode of social regulation in the migrant labor market. Some researchers have connected these policies to grassroots responses to the presence of a growing number of immigrants, suggesting that LRs are likely related to real or perceived “ethnic competition” in the labor market.[4,5] Latino and immigrant workers are overwhelmingly concentrated in low-wage jobs and sectors of the labor market. Meanwhile, many US-born workers impacted by the loss of jobs in the middle of the wage and skill structure are experiencing increasing employment insecurity, which brings them into real or imagined competition with immigrant workers. In our study, we set out to assess factors that influence the passing of LR policies by local governments.[6]

We used data from the United States Local Migrant Regularizations Database (USLMRD), which includes information on 5528 ordinances in 3067 cities, counties, and states across the US between 1983 and 2015. The types of LRs included in the dataset, which is updated annually, are: language access laws; anti-solicitation ordinances; local enforcement of federal immigration laws; and employment verification laws. We restricted our analysis to policies passed by county governments, focusing on policies enacted between 2004 and 2014 in order to capture the changes that accompanied the increased lawmaking related to migration regularizations that occurred after 2006.

We employed a multilevel discrete-time event history approach. In this approach, the probability of any county adopting a policy in a given year is referred to as the ‘hazard rate’, while ‘survival rate’ denotes the rate of counties that did not pass a policy. We explicitly examined factors that influenced the adoption of negative LRs at the county level. We also sought to examine the effect of a county being located in a particular state on the hazard rate, calculating the annual hazard and survival rates to consider any geographic or temporal trends in the adoption of LRs by county governments.

We found a sharp increase in the adoption of LRs at the county level between 2008 and 2012, followed by a sharp decrease. The initial increase may be due to the adoption of policies related to implementing the Secure Communities program by the federal government. It could also be likely that county governments became active to mediate instances in which municipalities were seeking to enhance or counter state policies enacted at the time. We also detected unique temporal and geographic shifts present in the intensity of LR adoption over the time period of study. Indeed, significant clusters of hazard moving throughout the country over this period illustrate a unique geographic trend to the policy adoption of LRs. The hazard of passing a policy was not significantly related to a state passing an LR—except in those cases where states had passed a mix of favorable and unfavorable policies. In this sense, the policy environment may have required county governments to become more engaged in mitigating diverse policy mandates.

Though we found limited relationships between the implementation of LRs and economic factors, there was a positive relationship to poverty rate. These results indicate that any “ethnic competition” is not solely located in the labor market context, but other socioeconomic contexts as well. Indeed, the strongest predictors of LR adoption were social factors. For example, the percentage of individuals in a county with a Bachelor’s degree or higher was negatively associated with the passing of LRs at the county level. Meanwhile, we found that it was not necessarily the presence or growth of foreign-born or undocumented-immigrant populations that influenced the adoption of LRs; rather, it was the growth of the general Latino population in particular (Figure 1). A 1-percent increase in the Latino population of a given county was related to an increase in the mean hazard ratio by an estimated factor of 3.56. This suggests that there is a distinct racialization to LR policy adoption and that these policies tend to target Latinos. Relatedly, the number of Latino elected officials was negatively correlated: an increase by one elected Latino official reduced the odds of a county passing an LR by a factor of 0.62. 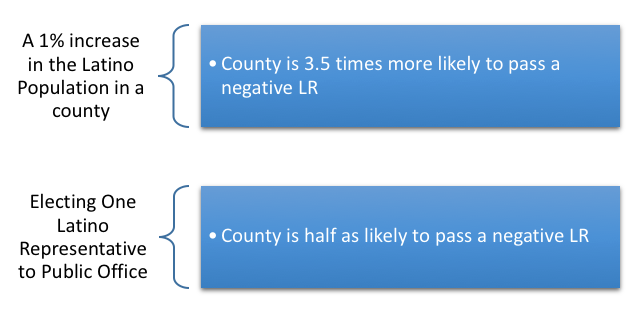 We concluded that county governments were particularly active in implementing LRs, with population demographics, economic characteristics, and policy-diffusion processes all proving influential. Geographic location and policy activity of municipal and state governments were also important factors. There appeared, for example, to be a unique geography to the state–county interaction as the effect of state policymaking was highest for Florida and states along the United States–Mexico border. Most notable, however, was the fact that, over time, the adoption of LR policies at the county level was strongly related to large Latino populations. Though Latino political representation lowered the probability of an LR being adopted, the positively correlated relationship between growth in Latino population and adoption of LR policies is the strongest and most consistent relationship we found. This suggests a distinct racialization of LR policies and may indicate that social factors and sociopolitical discourse at the county level are perhaps more important than economic factors in influencing the passage of LRs at the local level.

It is important to understand the ways in which LRs as policy decisions are interpreted and represented in local contexts, and how these specific policy decisions shape broader immigrant regularization policy deliberations and decisions. Our study shows that county governments are particularly active in immigration policymaking in the United States, and that sociopolitical factors may be more influential in driving these decisions than the real impact of migrants on socioeconomic conditions. This has enormous implications for policy debates and discussions related to the geography of immigration regularization, migrant socioeconomic integration, and socioeconomic stratification in the United States.

M. Anne Visser is an Associate Professor of Community and Regional Development at UC Davis.

Sheryl-Ann Simpson is an Assistant Professor of Geography and Environmental Studies at Carleton University.