Growing Divide Between Young People Able to Go It Alone and Those Who Live at Home Wall Street Journal, October 9, 2013 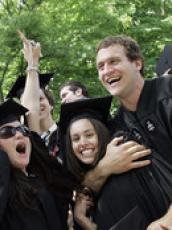 The gap between America’s best-off and worst-off is widening—and driving a wedge between young people with the resources to strike out on their own and those for whom living with family or friends has become, at least for now, an economic necessity.

The odds that a young adult in the U.S. will become the head of a household, whether as an owner or renter, has fallen more between 1990 and 2010 than in previous decades, accelerating a trend that began with the Baby Boomers, according to an analysis of Census Bureau data by Emily Rosenbaum, a demographer at Fordham University.

At the same time, more young people are living with their parents, despite the gradual improvement of the economy. As the Journal noted in August, 13.6% of Americans ages 25 to 34 were living with their parents in 2012, up very slightly from 13.4% in 2011. (When Census surveyed Americans this past spring, the figure continued climbing to 13.9%, but the change was not statistically significant.)