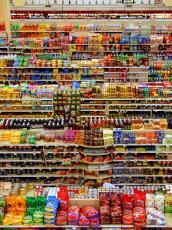 Food assistance is a large part of the food economy, with Supplemental Nutrition Assistance Program (SNAP) redemptions totaling $76 billion in 2013, representing more than 10 percent of sales at supermarkets. Such assistance is important to the millions of Americans who depend on it. Less clear until now has been how food assistance shapes the retail food environment. In a recent study, we set out to find out whether the rollout of Food Stamps during the 1960s and 1970s affected the retail environment. We found that locations which rolled out the Food Stamp Program earlier had more food stores, more workers in food and grocery stores, and higher real sales. This suggests that current policy proposals to shrink the federal food-assistance budget would have unintended negative consequences for the retail food environment.

​Federal nutrition programs are a cornerstone of the food economy. In 2017, around $63 billion in SNAP benefits were redeemed. These were accepted at 263,105 firms, with the majority—about $58 billion—spent at superstores or supermarkets.[1] This is on a total base of total grocery store sales of roughly $625 billion in 2016. Food-assistance programs are automatic stabilizers in times of economic downturn for recipients and retail food stores alike.[2] During the Great Recession, SNAP spending accounted for more than 10 percent of food-at-home spending. Indeed, it was the largest source of such spending for low-income Americans.[3]

By increasing the resources available to households, SNAP benefits lead participants to spend more on food. This is particularly true among the extra-marginal consumers who would consume fewer unprepared foods in the absence of SNAP. Given that retailers will, all else being equal, choose to open and locate in areas where demand is highest to maximize profits, it follows that SNAP likely influences these choices for food retailers. Recognizing this fact enables us to make two observations. Firstly, increased SNAP participation and spending of benefits in a given area may induce stores to open or expand, which in turn may increase the amount of food that can be bought with a given level of benefits to participants. Secondly, to the extent that food-assistance programs improve the food environment, both participants and nonparticipants may benefit.

It is well known that low-income neighborhoods have less access to large-format retailers, and that a low-quality food environment is associated with a number of adverse outcomes.[4] Meanwhile, access to food stores—particularly large-format retailers—is associated with greater selection and lower prices, directly increasing the amount of food that can be purchased with a set amount of food assistance.[5] Some research suggests that proximity to a supermarket is also associated with a healthier diet, better health outcomes (such as reductions in obesity) and decreased rates of food insecurity.[6,7,8] Understanding how food assistance affects store-location and expansion decisions is therefore very important.

In our study, we leveraged the shock to local food environments provided by the rollout of the Food Stamp Program in the 1960s and early 1970s. We used this variation to see if increased food spending spurred by this program led to more food stores, increased real sales, more food employment, and higher real payroll. This provides evidence about how transfer programs such as SNAP affect the retail environment, leading to possible spillovers even beyond the diets of those on these programs.

To do this, we used data from select years in the 1950s, 1960s, and 1970s. Specifically, we made use of newly digitized Census of Business and Census of Retail Trade data on real sales and the number of firms by sector; County Business Pattern data on the number of firms, employees, and payroll by sector; and Decennial Census data on workers in those industries. To identify the effect of Food Stamps on real sales, the number of supermarkets and food stores, real payroll, employment, and other measures of the food environment, we used a well-tested causal empirical design. We deployed a differences-in-differences approach while controlling for national and other relevant trends. This enabled us to compare outcomes in counties after they had implemented Food Stamps with those before, while controlling for other changes.

We found that adoption of the Food Stamp Program led to between a 1.3 and 1.6 percentage point increase in real sales (in food stores), using the Census of Retail Trade data. These are economically meaningful effects. They compare to about a 6 percentage point participation rate per capita for Food Stamps within a year after rollout.

Our study found compelling evidence that increases in store openings and employment were related to SNAP rollout. These may have generated positive spillovers both to participants and non-participants. We found that Food Stamp rollout increased sales in food stores by 1-2 percent and increased employment in food stores by between 3 and 5 percent. Our results suggest that there are important effects of the largest food assistance program (SNAP) on the retail food environment. In light of this, current policy proposals to shrink the federal food-assistance budget would likely have unintended negative economic consequences, while maintaining or expanding the program would likely lead to more positive retail outcomes.

Timothy K.M. Beatty is a Professor of Agricultural and Resource Economics at the University of California, Davis.

Marianne P. Bitler is a Professor of Economics at the University of California, Davis and a Research Associate at the NBER.

Cynthia van der Werf is a PhD candidate in the Department of Economics at the University of California, Davis.

Professor Beatty is a Professor in the Department of Agricultural and Resource Economics at the University of California, Davis.  His research relates to the empirical analysis of consumption behavior, in particular as it relates to health outcomes. Professor Beatty’s research has tended to focus on food consumption and the demand for nutrition and health, at both the household and aggregate levels.