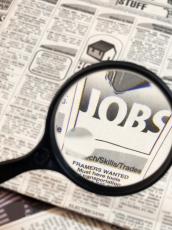 For the past two decades, U.S. anti-poverty policy has coalesced around the idea that work should be at the center of anti-poverty programs. Bi-partisan welfare reform in the 1990s focused on work requirements and time limits. The growth of the Earned Income Tax Credit (EITC), which increases after-tax income for those working at the bottom of the wage distribution, has also emphasized the importance of work. This brief summarizes facts about how many of the poor are able to work, why many cannot work, and what poverty rates are among those who work.

Among the poor aged 18 to 64, 40.8 percent worked for some part of the year, and many of those not working reported barriers to paid work or engagement in other productive activities in 2014.

18.9 percent of the poor aged 18 to 64 did not work due to disability, 10.6 percent were in school, and 5.9 percent were unemployed and looking for work, based on tabulations from the Current Population Survey.[3]

The poverty rate among those who work for more than half of the year is much lower than for the population as a whole.

​According to the U.S. Bureau of Labor Statistics (BLS), the working poverty rate was 5.6 percent, compared to a total poverty rate of 13.5 percent in 2015. This means that an estimated 8.6 million people were working poor or had income below official poverty thresholds despite working (or looking for work) for more than half the year.[4]

Among families with children, the working poverty rate is substantially higher, reflecting the higher poverty thresholds associated with larger families.

Official poverty thresholds do not take into account childcare costs, which have a large impact on disposable family income.

Part-time (and part-year) employment, common among the working poor, is driven by both economic and non-economic factors, including family and health needs. 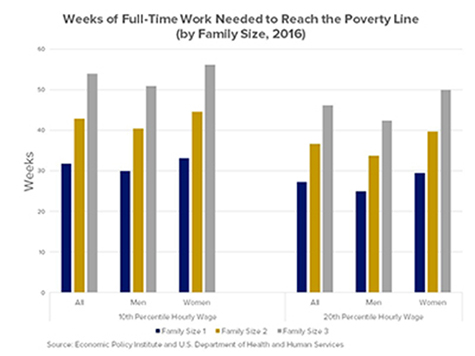 7. Bureau of Labor Statistics, 2017. “Persons at Work 1 to 34 hours in all and in Non-Agricultural Industries by Reason for Working Less than 35 Hours and Usual Full or Part-Time Status”.