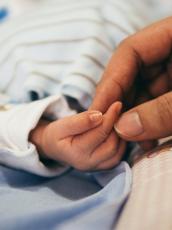 The 2012 Deferred Action for Childhood Arrivals (DACA) program granted work authorization and protection from deportation to more than 800,000 young undocumented immigrants who arrived to the United States as minors. In a recent study, we investigated the association between this expansion of legal rights and birth outcomes among 72,613 singleton births to high school-educated Mexican-immigrant women in the United States from June 2010 to May 2014 using birth records data from the National Center for Health Statistics. We found that DACA was associated with improvements in the rates of low birth weight and very low birth weight, birth weight in grams, and gestational age among infants born to Mexican-immigrant mothers. Policymakers should consider this evidence of DACA’s direct and intergenerational health benefits in future reforms of immigration legislation.

Between DACA’s creation in 2012 and June 2020, more than 825,000 initial DACA applications were approved.[1] Studies have found that DACA increased high school graduation, employment, and public service receipt; reduced poverty; and improved the mental and self-rated health of participants.[2,3,4] The threat of deportation through immigration enforcement is a known stressor that affects the health of pregnant women and their newborns.[5] Deportation threat also inhibits social service usage and undermines confidence in U.S. institutions, with direct and indirect consequences for health.[6] By removing some of these stressors, DACA may also have improved the health of infants born to DACA participants.

An estimated 256,000 U.S.-born children have at least one parent who is a DACA participant.[7] Studies have found health improvements among children of DACA participants.[2] Thanks to stress reduction and improvements in socioeconomic status resulting from the program, mothers who participate in DACA may have a healthier pregnancy and birth. DACA may also affect birth planning and timing.[8] Births after DACA may be healthier because participants planned and achieved pregnancies within a broader set of opportunities.

In our study,[9] we considered how DACA affected the health of participants’ children at the start of their lives by examining two standard birth outcomes: birth weight and gestational age. We focused on birth outcomes among Mexican-immigrant women in the United States.

We analyzed U.S. birth record data from June 2010 to May 2014 provided by the National Center for Health Statistics (2018). Our analytic sample included 72,613 births. We conducted a difference-in-differences analysis, comparing the difference in birth outcomes to DACA-eligible mothers before and after DACA was announced with the difference in birth outcomes to DACA-ineligible mothers before and after DACA. To define DACA eligibility, we used the DACA eligibility upper age criterion (<31 on June 15, 2012). DACA-eligible mothers were just below the upper age cutoff for DACA eligibility, 29-30 years old at the time of the birth. The ineligible group were just above the upper age cutoff for the period from 2012-2014, 33-34 years old.

We compared births across three periods. The Pre-DACA period referred to births before the DACA announcement in June 2012. The Post-DACA Period 1 referenced births conceived before, but born after, DACA was announced. The Post-DACA Period 2 encompassed births conceived after DACA was announced. We limited the analytic sample to Mexican-born mothers residing in the United States and having at least a high school diploma or GED, who are most likely to be eligible for DACA. We further limited our analyses to singleton births between 22 and 44 weeks of gestation.

We found that for some outcomes—especially LBW, VLBW, and birth weight at the 6th percentile—a noticeable gap emerged between eligible and ineligible women after DACA was announced and particularly in the period beginning nine months after the announcement of DACA. Figure 1 displays this for LBW.

Improvements were concentrated among births at the bottom of the birth-weight distribution. DACA was associated with an average increase of 79 grams at the 6th percentile, an increase of 25 grams at the 50th percentile, and no difference in birth weight at the 93rd percentile. DACA was not associated with preterm births or SGA, but was associated with 0.09 weeks longer average gestational age. Our analyses showed no association between DACA and birth outcomes for births in utero at time of the announcement (Post-DACA Period 1). 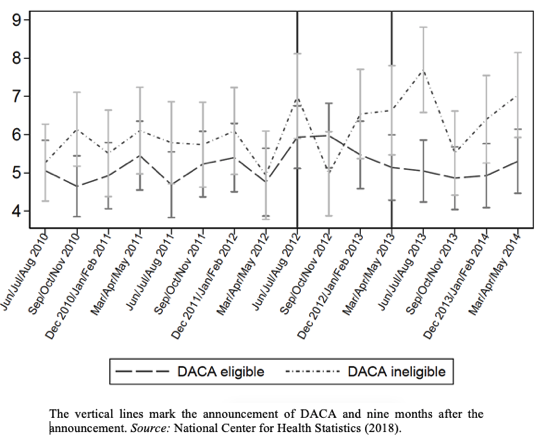 Figure 1: Unadjusted Proportion of Low-Birth-Weight Infants by three­-month period among singleton births to DACA-­eligible and DACA-­ineligible high school-educated Mexican-born women in the United States between June 2010 and May 2014.

Our study showed that DACA was associated with substantially improved birth outcomes for births conceived in the nine-month period following the announcement of DACA. Births conceived to DACA age-eligible mothers after the DACA announcement experienced a lower risk of LBW and VLBW, and larger average birth weight. These benefits were concentrated among births at the lower end of the birth weight distribution, meaning that births at greatest risk of poor outcomes benefited the most from the program. Pre-term and low-weight infants are at greater risk for mortality and a variety of health and developmental problems, which as a result can cause significant emotional and economic effects on their families.[10] Given the association between birth outcomes and later-life health and development, we can assume that DACA would also reduce those concomitant risks.

Because some women in the DACA-age-eligible group are documented or are undocumented but do not meet the other criteria for DACA, our estimate of DACA’s impact is likely conservative. The true effect of DACA on maternal and infant health is likely larger among the eligible population than our estimates reflect.

Legislation to provide permanent legal status for DACA recipients and other immigrants is urgently needed. Such legislation would put an end to the stressful uncertainty created by threats to the temporary program. As members of Congress debate President Biden’s proposed immigration reform legislation, which includes a route to citizenship for undocumented immigrants, they should consider evidence of DACA’s direct and intergenerational health benefits. As our study suggests, millions of immigrants and their U.S.-born children would benefit from such reform.

This work was supported by the National Science Foundation grant 1822787.

This policy brief is generously co-sponsored by the UC Davis Gifford Center for Population Studies.

[2] Patler, Caitlin, Erin Hamilton, Kelsey Meagher, and Robin Savinar. 2019. “Uncertainty About DACA May Undermine Its Positive Impact On Health For Recipients And Their Children.” Health Affairs 38(5):738–45.

[5] Novak, N., Geronimus, A., & Martinez-Cardoso, A. (2017). Change in birth outcomes among infants born to Latina mothers after a major immigration raid. International Journal of Epidemiology 46, 839–849.

[7] Svajlenka, N. P. (2019). What we know about DACA recipients in the United States (Report). Washington, DC: Center for American Progress. Retrieved from https://www.americanprogress.org/issues/immigration/news/2019/09/05/474177/know-daca-recipients-united-states/