Unaccompanied Migrant Children: A Humanitarian Crisis at the U.S. Border and Beyond By Stephanie L. Canizales, University of Southern California

Intensified violence and poverty in the Northern Triangle countries of Central America have spurred migration[1] among youth who seek to either reunite with family or to support families who remain abroad. Policies to protect these youth would promote their holistic integration into U.S. society, enforce safety and well-being along the U.S. southern border and help strengthen the youths’ countries of origin socially, economically and politically.

U.S. Customs and Border Protection (CBP) reports that 68,541 children were apprehended at the U.S. southwest border between October 1, 2013 and September 30, 2014. Apprehension rates of unaccompanied children there from all countries in FY 2015 through March declined 45 percent compared to the same period in the year before. However, from 2009 through FY 2014, apprehensions of unaccompanied children from Northern Triangle countries Guatemala, Honduras and El Salvador increased from 3,304 to 51,705.[2]

The bulk of unaccompanied minors from all counties who are apprehended at the southwest border are teenagers. However, data show a 117-percent increase in those ages 12 and younger for FY 2013. The number of apprehended unaccompanied youth ages 13-17 has increased by only 12 percent over the same period.

We have also seen a 77-percent rise in the number of unaccompanied girls, a large proportion of them from Honduras, compared to an eight-percent increase in unaccompanied boys, evincing the growing dangers for young women in their home countries among other factors.[4]

Children from the Northern Triangle

Researchers consistently cite increased poverty and violence in Honduras, El Salvador and Guatemala as principal motivations for child migration.[5] Violence has been endemic to the region since the 1980s, causing fragile institutions, weak or corrupt police and high gang activity.[6] These countries suffer the world’s first, fourth, and fifth highest homicide rates, respectively, according to the UN Office on Drugs and Crime.

The increased homicides correlate with higher numbers of children fleeing to the U.S.[7] Additionally, these countries are among the poorest in Latin America.[8] Many children migrate to the U.S. with hopes of studying half of the day while working the other half in order to remit money to families abroad.[9]

Children who avoid apprehension might become rural agricultural workers, or in cities may work in manufacturing, restaurants or in domestic work.[10] These children are highly vulnerable to exploitation and face the same dangers as other unlawful migrants.

Children apprehended at the border are processed and detained by the Department of Homeland Security. The 2008 Trafficking Victims Protection Reauthorization Act (TVPRA) requires all unaccompanied children to be screened as potential human trafficking victims. It also prohibits deporting children from countries that do not share a border with the U.S., including Northern Triangle countries.

Custody of these children is transferred to the Office of Refugee Resettlement (ORR) under the Department of Health and Human Services (HHS), a process that is mandated to take no more than 72 hours. The 1997 Flores Settlement Agreement requires that HHS place migrant children in the least restrictive environment, including with competent family members or sponsors, or in facilities that meet state standards for foster care.

Where possible and appropriate, the ORR releases unaccompanied children to sponsors while their cases await review by immigration courts. Unauthorized parents may be reluctant to identify their children. Sponsors, typically family members, are required to pass a background check, ensure the child attends immigration proceedings and provide for the child’s physical and mental health.

The surge in child migrants and resulting attention to the issue provides another potential justification for comprehensive immigration reform. Legalization of undocumented families in the U.S. could, in the short term, increase child migrants’ chances of lawful reunification with kin and children’s access to health services. In the long term it could increase the well-being of the households children enter.[12]

Humanitarian issues surrounding unaccompanied migrant youth suggest the need for policy responses at many different levels. At the federal level, more receptive immigration policies would include increased spending on shelters, locating sponsors and ensuring due process. This would also include recognition that unaccompanied migrant children may qualify, under current U.S. law, for various types of relief, including asylum, Special Immigrant Juvenile Status, U visas and T visas. Another aspect of current policy is that claims to refugee status must be carefully analyzed to ensure that TVPRA is upheld.

At the state and local level, culturally sensitive educational, mental health, language and legal services are critical to meeting the needs of children who have experienced trauma, whether from their home countries, their journey north or their settlement in the U.S.

Finally, strengthening the social, economic and political infrastructure of Northern Triangle countries could alleviate the poverty, violence and unstable governments which keep children and their families marginalized in their home societies and migrating to the U.S. in pursuit of a better life.

Stephanie L. Canizales is a Ph.D. Candidate in Sociology at the University of Southern California.

[1] Wong, Tom K. 2014. “Statistical Analysis Shows that Violence, not Deferred Action, is behind the Surge of Unaccompanied Children Crossing the Border.” Center for American Progress.

[8] The World Bank. 2015. “Poverty and Equity Regional Dashboard: Latin America and the Caribbean.” 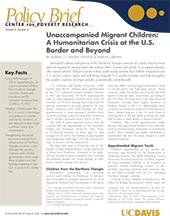 Stephanie Canizales is pursuing her Ph.D. at the University of Southern California in the Department of Sociology. Stephanie specializes in Central American migration, race/ethnicity, and the 1.5 and second generations.