At the core of debates about Head Start is evidence of its effectiveness, which has been questioned due to the reduction in test score gains, known as test score “fade-out”, in the years following participation. However, short-term test score gains may not accurately reflect the impacts of the program. A number of studies suggest that the program yields long-term improvements that include social, cognitive and physical well-being. These findings show that, overall, Head Start produces a positive return on investment.

Annually, almost 900,000 children aged 3-5 participate in Head Start, the mainstay public pre-kindergarten program in the U.S. It serves children who are disproportionately poor, disabled, from racial and ethnic minority groups or living in non-English speaking households with a FY 2014 budget of about $8.6 billion.

Head Start’s effectiveness has been questioned based on the apparent impermanence of children’s cognitive gains, first documented months after its inception in 1965.[1] A group of 179 New York City Head Start children were found to have test scores that were not statistically distinguishable from their non-Head Start classmates by kindergarten.

In 1969 the Westinghouse Learning Corporation undertook a comprehensive nationwide study of the program.[2] Participants in the year-round program showed cognitive gains immediately, but their edge faded in second and third grade. However, concerns regarding the comparability of children in the control group left questions regarding whether the results reflected the true effect of the program.

The 2002 National Head Start Impact Study (HSIS)[3] was a large-scale randomized control trial that involved 4,667 children. The study used a lottery to allocate immediate enrollment in Head Start, while children in the control group were allowed to stay in parental care or to enroll in non-Head Start programs.[4] The randomized research design made any measured difference between the groups attributable to Head Start. 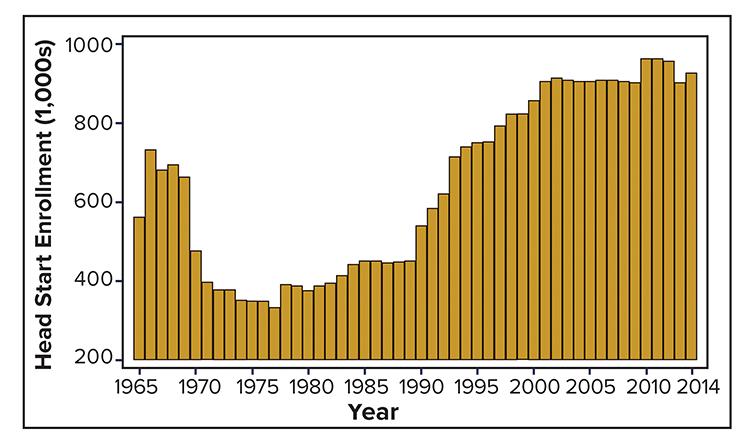 The study found that children given immediate access performed a statistically significant 0.1-0.2 standard deviations better on cognitive measures, and had better behavior and home environments. However, the gap in cognitive measures diminished, leaving little evidence of its impact by the end of first grade. The study was unable to find conclusive evidence of impacts on socio-emotional measures or health outcomes through first grade, though it did find evidence of increases in health insurance coverage through kindergarten and first grade.

Other studies which use a variety of “quasi-experimental” research designs[7] find a positive effect of Head Start on long-term economic and physical outcomes. For example, one study based on siblings with different exposure to the program found that Head Start increases the probability of graduating from high school, acquiring some college education and less criminal activity.[8]

A recent study[9] finds that the Head Start intervention also improves health, introducing yet another means by which it leaves a lasting impact. The authors estimated that participation in Head Start reduces the likelihood of being overweight and having a disabling condition during adolescence.

Test score fade-out is not necessarily inconsistent with overall gains in other areas such as health and home environments. Research has documented test score fade-out among the same cohorts that later show long-term improvements in other measures,[10] which means that a similar pattern of fade-out and future improvement may also be true for children currently in Head Start.

If fade-out is consistent across groups of children starting the program in different years, it suggests  that the long-term improvements identified in research on earlier cohorts of children may not be discounted as being unique to an earlier and more effective version of Head Start.

What is the right outcome measure?

Test scores may not reflect the main benefits of Head Start participation. Important and lasting improvements in health, behavior and executive control, for example, may not be captured in these scores. This is consistent with studies that find that health gains from Head Start persist from preschool onwards. Documented increases in parental involvement[12] may facilitate these health outcomes as well as other improvements in as yet unmeasured areas.

Chloe Gibbs is an Assistant Professor of Economics at the University of Notre Dame.

Douglas L. Miller is a Professor of Economics at UC Davis.

Na’ama Shenhav is a Ph.D. candidate in Economics at UC Davis.

[1] Wolff, M., et al. 1966. “Study I: Six months later, a comparison of children who had Head Start, Summer 1965, with their classmates in kindergarten.” Yeshiva University.

[2] Westinghouse Learning Corporation and Ohio University. 1969. The Impact of Head Start: An Evaluation of the Effects of Head Start on Children’s Cognitive and Affective Development, Volume 1: Report to the Office of Economic Opportunity.

[7] These use non-experimental variation to replicate experimental conditions. Researchers argue that these estimates of causal effects are highly credible. In practice, credibility varies depending on how close the study conditions are to an experiment.

[11] Chetty, R., et al. 2015. “The Effects of Exposure to Better Neighborhoods on Children: New Evidence from the Moving to Opportunity Experiment.” National Bureau of Economic Research.

Download Brief on the Long-run Benefits of Head Start 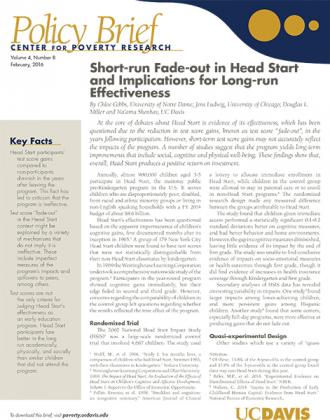