In recent years, inner-city school districts have worked to balance budgets despite funding cuts and unpredictable enrollment due to demographic changes. While redistricting—the process of changing school boundaries, closing and/or consolidating schools—can effectively address budget and enrollment problems, it can disproportionally affect disadvantaged students and families.

In a new study supported in part by the Center for Poverty Research I have found that redistricting can increase educational inequality, increase segregation within schools and hurt already disadvantaged students and communities.

The gentrification of inner-cities across the U.S. has increased the chance for public schools to become more racially and socioeconomically diverse.[1] Studies have indicated that school diversity has modest but positive effects on African-American student achievement, especially among high-achieving students.[2]  Additionally, school diversity is positively associated with increased desire and preparedness to interact with individuals from different racial backgrounds.[3]

These closures disproportionately impact black and lower-income students, families and neighborhoods. Students from these schools are sent to schools either far away from home, less diverse or lower performing.

This study explored a redistricting process with qualitative interviews of 25 parents whose children were ultimately required to change schools. The district is in a major metropolitan city that has undergone major demographic changes over the past 20 years. This study focused on one of five geographically defined clusters within the district. Enrollments in six of the 14 predominantly black schools within the cluster were under capacity, while the four predominantly white schools within the cluster were near- or over-capacity.

The most contentious redistricting option would have merged over- and under-capacity schools and re-zoned some white students from affluent families to a closer, predominantly black middle school. This option was favored by African-American parents wanting to save their neighborhood schools, and also by a small group of white, middle-class gentry parents already utilizing the predominantly black neighborhood schools. This could have increased racial and socioeconomic diversity within a core group of schools.

While merging schools would have solved capacity issues and increased diversity, the redistricting increased racial and socioeconomic segregation in schools with high concentrations of disadvantaged students. Additionally, many minority and low-income students were zoned out of diverse, academically competitive feeder schools into lower-performing, less-diverse schools.

Many disadvantaged parents felt that the redistricting placed an undue burden on their families. Parents whose main mode of transportation was either walking or the bus system expressed concern about their future ability to reach their child’s school in the event of an emergency. For one parent, the commute went from a seven-minute walk to a 45-minute bus ride or expensive cab ride. Many parents felt the increased commute would also prevent them from being actively involved at the school, or from enrolling their children in after-school activities.

When asked about how the redistricting impacted their community, parents from disadvantaged backgrounds described the void that closed schools left behind. They described how neighborhood schools served as recreational and meeting facilities with programs to benefit the entire community. One closing resulted in the loss of a $700,000 grant to fund an after-school program for disadvantaged students that was slated to offer GED-preparation classes and parenting workshops.

White middle-class parents, who were open to predominantly black schools with at least a 30 percent white middle-class population, expressed concern that the closures would negatively impact their neighborhood’s ability to attract other middle-class families with young children. After the closures, many of these parents enrolled their children in charter schools. Redistricting discouraged pro-public school gentry parents from investing time and resources into district schools because they felt that their diverse neighborhoods would always get the “short end of the stick.”

Making Local Schools Attractive to All

As school funding and enrollment continue to fluctuate, districts across the country will be confronted with potentially closing or reconstituting schools. Districts might solve enrollment and underutilization issues by making schools more attractive to middle-class families who are zoned for, but often opt-out of, neighborhood schools.

In this study, white middle-class parents were very receptive to neighborhood public schools but were hesitant because of the perceived lack of district investment in inner-city schools. Until school districts find a way to increase enrollment among zoned students, it is essential that district officials work to ensure that minority and low-income students, families, communities and schools do not bear the brunt of redistricting outcomes.

Daphne Penn is a Ph.D. candidate in Education at Harvard University. Her research interests include Social Stratification, Sociology of Education and Urban Poverty. She was a 2013 Center for Poverty Research Visiting Graduate Scholar. 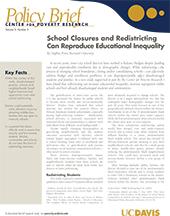