California health advocates are increasingly aware of the hazards of Valley Fever (Coccidioidomycosis), a disease caused by a fungus spore living in semi-arid regions of the west and southwest U.S. California has the most associated deaths despite only representing about 31 percent of all U.S. cases.[1] Policy makers can reduce its impact on low-income communities and save millions of dollars in treatment each year by addressing the circumstances of infection, as well as the difficulties low-income populations face in accessing care.

Valley Fever (VF) is a painful and costly illness. About 40 percent of people who catch it will experience fatigue, fever, chills, chest pain, body aches, rashes and bruising. Misdiagnosis and lack of treatment may let VF develop into more severe infections. The illness can last several weeks to years.

The disease has important implications for low-wage agricultural and construction workers, as well as others who work outdoors for prolonged periods of time, especially where airborne spores are likely expose workers to risks.[2] In counties where VF is most prevalent, agricultural workers make up between 10 and 30 percent of the workforce. Residents earning less than $15,000 per year are more likely to develop severe symptoms of VF.[3] Latinos and African Americans are also more likely to die without being diagnosed.[4]

In California, the number of related deaths from 1990 to 2008 was over 3,089. The state had the highest rate of associated deaths when compared to other states.[5] The highest rates of VF are also among the poorest counties. For example, the number of cases reported in Kern County was 219 cases; Kings County reported 146 cases.[6] The official poverty rates of these counties in 2013 was 22.7 and 21.8 percent, respectively, which is about five percent higher than the entire state.[7]

The Costs of Valley Fever

Every year, California pays approximately $183 million dollars in VF-related hospital expenses.[8] To treat the disease, a typical hospital stay will cost $55,000.[9] Of total VF hospitalizations from 2000-11, government programs covered 62 percent of cases through Medi-Cal, Medicare and other government indigent programs.[10]

Low-income residents affected by VF take on many additional non-medical costs including lost wages. More than half of patients are hospitalized for over one week,[11] and a quarter of patients seek medical attention more than ten times.[12] This is time they cannot work, and low-wage workers are less likely to pursue worker’s compensation.[13]

Although the Affordable Care Act (ACA) will offset some medical expenses, the UCLA Center for Health Policy Research recently reported that about 2.4 to 3.7 million California residents did not obtain health insurance under the ACA, and about 1.4 million of these were undocumented workers.[14]

Residents without health coverage are more likely seek care only during advanced stages of the illness because of the out-of-pocket expenses. The price of medication can be a serious burden to low-income families. Additional obstacles to care may include cultural differences, inadequate transportation, undocumented status, language barriers and overcrowded facilities.

Since 2010, California has used an automated laboratory reporting system to monitor outbreaks and to make disease surveillance more sensitive, specific and timely.[15] However, awareness and better testing will not change the causes of VF. As an environmental disease that increases the public’s risk during high wind gust and soil disturbance, solutions must address the circumstances of infection, as well as the difficulties low-income populations face in accessing treatment.

A Health Impact Assessment (HIA) is a community based assessment of the social and environmental factors contributing to health disparities.[16] It can help address health inequities with accurate data. The range of benefits of a HIA include identifying social barriers contributing to late or misdiagnosis, environmental factors complicating diagnosis and treatment, avoidable costs to the family and community and policy changes that will benefit highly affected communities.

There are different ways a community can implement a HIA. Local Health Departments can add amendments to health codes that require analyzing land use projects to test for contaminants in soil. Local city agencies responsible for Environmental Impact Reports (EIRs) under the California Environmental Quality Act (CEQA-1970) can request assessments that analyze the health effects of land use projects that increase air pollution including dust control. A city council can also implement voluntary testing policies that authorize an agreement between the local Department of Public Health and property owners to test and monitor for VF.

A HIA is a basis for future discussions about health and environment aimed at reducing the impact of VF. Without data about why the disease disproportionately affects the poor, funding and policies will continue to sidestep a very important issue.

Sarah Rios is a Ph.D. candidate in Sociology at the University of California, Santa Barbara. In 2013 she was a Center for Poverty Research Visiting Graduate Scholar with support from the Stanford Center on Poverty and Inequality. 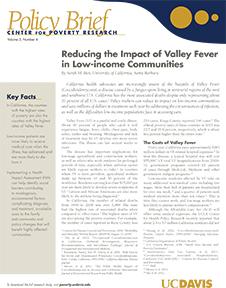 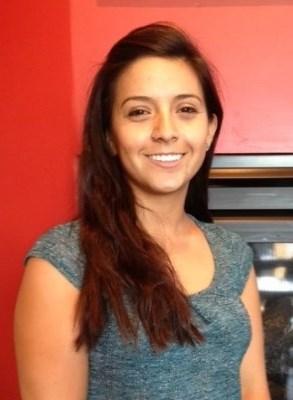 Sarah Rios is a doctoral student in the Sociology department at the University of California, Santa Barbara. Her research project examines the living conditions of farmworkers in the Central Valley, particularly as they relate to health disparities from daily exposure to contaminated air, water, and pesticides. Originally from Salinas-Watsonville Valley, California she developed a passion for healthy and sustainable environments after witnessing the effects of mono-agriculture on farmworkers’ health.