During a job interview, workers cannot tell whether an employer is prejudiced. However, they can observe the race of a potential supervisor. In a new study of racial inequality in the labor market, we tested a model of Black and White workers’ wages and job stability using a unique dataset that includes the race of the worker’s supervisor and state-level measures of prejudice. Our findings suggest that higher levels of prejudice in the state may cause Black job applicants to accept lower wages in exchange for the security of working for a Black supervisor. This could lead to lower average wages for Black workers.

Fifty years after major civil rights legislation, a significant economic gap between Black and White Americans remains. Differences in family structure, geography, education and health can explain a significant portion of this disparity. However, many Black families’ inability to rise above poverty is undoubtedly related to persisting racial gaps in jobs and income, particularly among low-skilled workers.

These disparities have implications for families in poverty. According to the U.S. Census Bureau, 27 percent of Blacks in the U.S. live in poverty. This rate is nearly three times the rate for non-Hispanic Whites. Black workers also lag significantly in jobs and wages. A 2011 study[1] found that Black men experience 176 percent more weeks unemployed than White men. From 2000-10, year-round full-time employed Black men earned less than 80 percent of the income earned by White men.[2]

Some of the wage gap can be attributed to differences in skill,[3] but this alone does not fully explain these disparities, especially for blue-collar workers. Persistent racial disparities suggest varying frictions in the labor market, including prejudice.

In a new study,[4] we explored these frictions with an economic model of how Black workers’ perceptions of prejudice can affect their wages and job stability. We then tested this model’s predictions using longitudinal data from the Bureau of Labor Statistics National Longitudinal Survey of Youth 1997 cohort (NLSY97) and the 1998-2010 waves of the General Social Survey (GSS).5

The NLSY97 provides data on workers’ wages and employment, as well as their supervisors’ race. The GSS is a nationally representative annual survey of social attitudes in the U.S. From GSS data, we estimate levels of prejudice by state.

To further account for differences in ability, we controlled for workers’ ASVAB test scores. The test is a multiple-aptitude battery that helps predict academic and occupational success in the military. 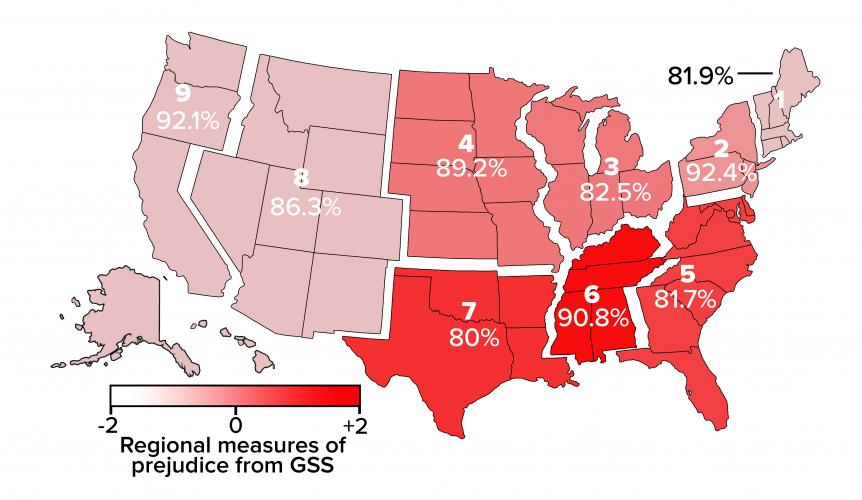 The continued existence of prejudice in job markets implies that policies that simply increase the number of Black supervisors and leaders in business may not necessarily increase wages for Black workers. This study suggests that Black workers will accept lower average wages for jobs with a Black supervisor in anticipation of more stable employment. As the level of prejudice increases in the state, the risk of instability from employers without Black supervisors increases and the negative wage and job stability effects are magnified.

Non-prejudiced employers may find it beneficial to invest in policies, like affirmative action, that signal their lack of prejudice. However, if a national policy, such as affirmative action, does not directly remedy prejudice, it could reduce information on prejudice in the job market. As a result, Black workers may be more willing to accept lower-wage jobs at firms they can ascertain with certainty are unprejudiced.

Timothy Bond is an Assistant Professor in the Department of Economics of the Krannert School of Management at Purdue University.

This research was supported in part by a Center for Poverty Research Small Grant. It was conducted with restricted access to Bureau of Labor Statistics (BLS) data. The views expressed here do not necessarily reflect the views of the BLS.

[3] Neal, Derek A. and William R. Johnson. 1996. “The Role of Premarket Factors in Black-White Wage Differences.” Journal of Political Economy.

[5] Some of the data are from GSS Sensitive Data Files obtained under special contractual arrangements designed to protect the anonymity of the respondents. These data are not available from the authors. Persons interested in obtaining this data should contact the GSS at GSS@NORC.org. 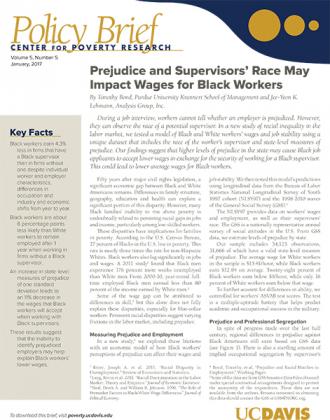