A quarter of the world’s population suffer from metabolic syndrome (MetS), a cluster of conditions that increase the risk of heart disease, stroke, and diabetes. MetS is particularly common among people of low socioeconomic status (SES). When we examined the relative roles of early-life SES and current SES in explaining MetS risk, we found that low early-life SES contributed to an 83% greater risk of MetS later on. This suggests that MetS health disparities originate in early childhood, and that making targeted interventions in childhood may help reduce instances of MetS among people born into poverty.

MetS[1] is a clustering of abdominal obesity, insulin resistance, dyslipidemia, and elevated blood pressure.[2] The syndrome is associated with a two-fold increased risk of cardiovascular events or death[3] and a five-fold increased risk of incident type 2 diabetes mellitus. With MetS prevalence rates rising globally, it is increasingly important to understand its distribution and identify intervention targets.[4]

We set out to better understand the social and economic contexts that shape the apparent causes of MetS—energy imbalance, insulin resistance, physical inactivity, etc.—across the lifespan. If individuals with lower SES are more vulnerable to such causes, does the timing of exposure to low SES (i.e., childhood versus adulthood) matter in explaining the risk of MetS? And for those who experience socioeconomic mobility—either upward or downward—does the risk of MetS change accordingly?

We conducted a study to examine the links between early-life poverty and adult metabolic risk. We found that people who experience poverty in early life are almost twice as likely to suffer from MetS as adults than people who do not. This suggests that programs that focus on reducing the effects of early life poverty can have a big impact on adults’ long-term health.

Our study examined the independent and interactive roles of early-life and current adult SES in explaining differences in adult MetS risk. That risk was indexed by three types of outcomes: (1) diagnosis of MetS according to the criteria specified by the International Diabetes Federation (IDF) definition; (2) a count of the number of MetS components on which the participant met the IDF criteria; and (3) a single score, or index, summarizing five standardized MetS components: waist circumference, blood pressure, triglycerides, high-density lipoprotein (HDL) (reversed), and glycosylated hemoglobin (HbA1c).

Between February 2009 and May 2012, we recruited and surveyed 354 participants from Vancouver, British Columbia. Aged between 15 and 55 years, these participants were recruited on the basis of their early-life and current SES. The four categories into which they were placed were low early/low current (97 participants), low early/high current (93), high early/low current (72), and high early/high current SES (92). Low SES included routine and manual occupations such as cleaner, laborer, and transportation operative. It also included those who never worked and the long-term unemployed. As such, many of these participants could be described as living in poverty based on income criteria. We used occupational status rather than income as a proxy for SES to enable a more accurate recollection of parental SES at the time when participants were very young children.

All participants completed laboratory sessions in which their blood was drawn to measure MetS components. Participants also completed a series of self-report measures and behavioral tasks and had their height, weight, and waist circumference measured.

We found that metabolic-risk inequalities by SES were more pronounced when considering early-life SES versus current SES. As Figure 1 (below) shows, the participants with low early-life SES were more likely to meet the IDF criteria for several individual MetS components. By contrast, none of the MetS components varied significantly with current SES. 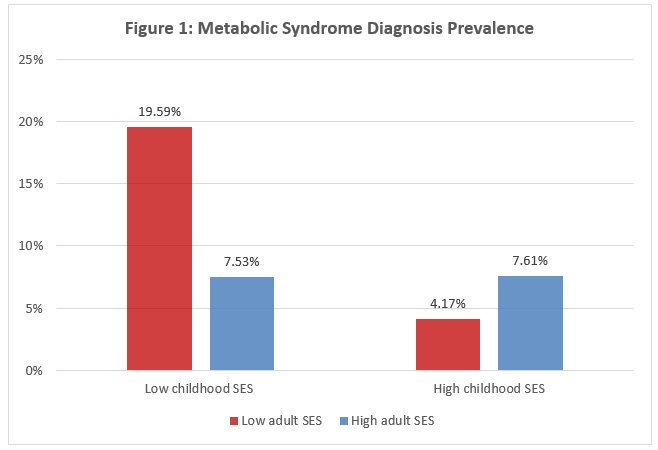 This all suggests that consistent exposure to low SES from childhood into adulthood is associated with the highest likelihood of adult MetS, and that upward mobility may offset the risk of MetS diagnosis. The effects of downward mobility, on the other hand, appeared insignificant. Overall, the results indicated greater metabolic risk among participants from disadvantaged backgrounds. On average, participants with low childhood SES had 1.83 greater odds of meeting the IDF criteria for MetS diagnosis compared with those with high early-life SES. This means that children who grow up in poverty are almost twice as likely to suffer MetS as adults than those who do not.

Rates of MetS diagnoses have been rising around the world, and its consequences are serious. For example, the 83 percent higher likelihood of MetS diagnosis in those from low early-life SES backgrounds is comparable to the MetS risks associated with cigarette smoking in this sample, or with the risk associated with 16 years of aging.

Because MetS is particularly associated with low SES in early childhood, that may be an ideal period for targeting interventions to reduce the risk of MetS across the lifespan. Such interventions should seek to improve the socioeconomic conditions of low-status children in order to improve their long-term metabolic health.

Camelia Hostinar is an Assistant Professor of Psychology at UC Davis.

Kharah M. Ross is an Owerko Postdoctoral Fellow at the University of Calgary.

Edith Chen is a Professor of Psychology at Northwestern University.

Gregory E. Miller is a Professor of Psychology at Northwestern University.