Employment may not protect low-wage workers against material hardship. Many low-wage workers have considerable variation in income because of seasonal work, shorter shifts and other work-based disruptions.[2] Even if yearly income is above the Federal Poverty Level (FPL), income may vary greatly from month to month. Low-wage workers are also more likely to work part-time.[3]

“Material hardship” refers to difficulty obtaining basic necessities such as food, rent and health care. It has been linked to an array of health problems, such as increased stress and poor mental health.[4] The modest association between official poverty and material hardship suggests that they tap different dimensions of economic standing.[5]

For this study,[6] we analyzed material hardship with 2003-07 surveys with workers in service occupations that include food and alcoholic beverage serving and hairstyling or barbering. Although Census data indicates that less than two percent of full-time workers held these occupations, they are in the 30 most common among low-wage workers.[7]

Study participants lived in one of three counties that are part of the greater metropolitan area of Sacramento, California. They were interviewed four times with no less than four months between each interview. In the first wave, 115 people working as stylists/barbers were interviewed, and 90 who worked as food servers. Approximately 87 percent of those in hair cutting and styling completed all four interviews, as did 75 percent of those working as food severs.

We used a mixed-effects model (random and fixed effects) to examine associations with self-reported overall mental health and depression. We then compared the relationships between: 1) official poverty and health and 2) material hardship and health. We also compared those who were poor and non-poor according to the official measure, as well as differences when individuals entered or left poverty. 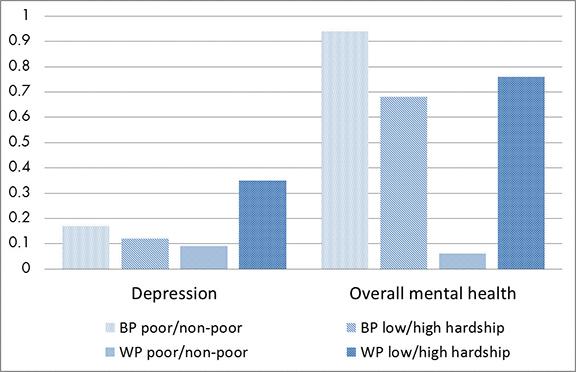 At wave 1, about five percent of those in food and alcoholic beverage serving and three percent in hairstyling or barbering earned below FPL. For material hardship, in wave 1 approximately 20 percent of servers and eight percent of stylists had scores of two or greater (occupation means are 1.49 and 1.21, respectively). These people reported experiencing material hardship at least some of the time.

These relationships between material hardship and mental health are independent of other variables that typically predict variation in mental health, such as age, gender, race, sexual orientation, nativity, income, access to health insurance, drug use and perceived stigma. These patterns are also independent of the respondent’s occupation.

Programs such as food stamps, housing subsidies and discounts on utility bills, can address material hardship directly. Income instability is associated with material hardship and poor mental health among low-wage workers, and laws that stabilize hours and wages, including an increase to  the minimum wage and guaranteed work hours, may mitigate these fluctuations.

Mikael Jansson is a Scientist at the Centre for Addictions Research BC and an Adjunct Assistant Professor in Sociology at the University of Victoria.

Cecilia Benoit is a Professor of Sociology at the University of Victoria and a Scientist at the Centre for Addictions Research BC.

[5] Iceland, John, and Kurt J. Bauman. 2007. “Income poverty and material hardship: How strong is the association?” Journal of Socio-Economics. 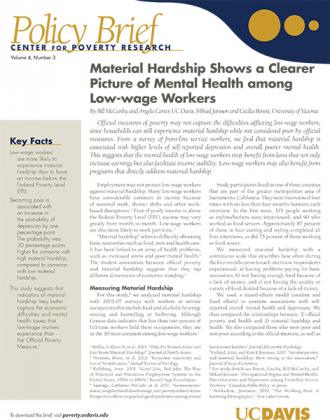 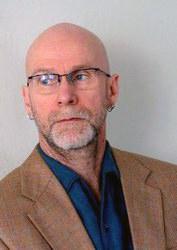