Linking income and health has been a notorious challenge for researchers. With multiple sources of income such as earnings, cash transfer and near cash transfer programs, it is difficult to isolate their effects on health. The 1993 expansion to the Earned Income Tax Credit (EITC), the largest and most recent of federal expansions to date, provided researchers a unique opportunity.

In a new study, Center for Poverty Research faculty affiliates Hilary W. Hoynes, Douglas L. Miller and David Simon examine the 1993 EITC expansion to measure the effect the extra income has on rates of low birth weight. They found that while the EITC is not a health program, it does have a clear impact on newborn health.

The Earned Income Tax Credit (EITC) has become a central part of the U.S. safety net for lower-income working families. It reduces poverty through two channels: it increases income immediately with a cash credit, and it provides incentives to work.

In 2009 the EITC reached nearly 26 million lower-income, working families at a cost of $57.7 billion , compared to $53.6 billion for Food Stamps (SNAP)  and $23.1 billion for cash welfare, job training programs and support services through TANF . In 2010 it removed six million from poverty overall—half of those were children.  It also leads to increases in employment among single women with children. 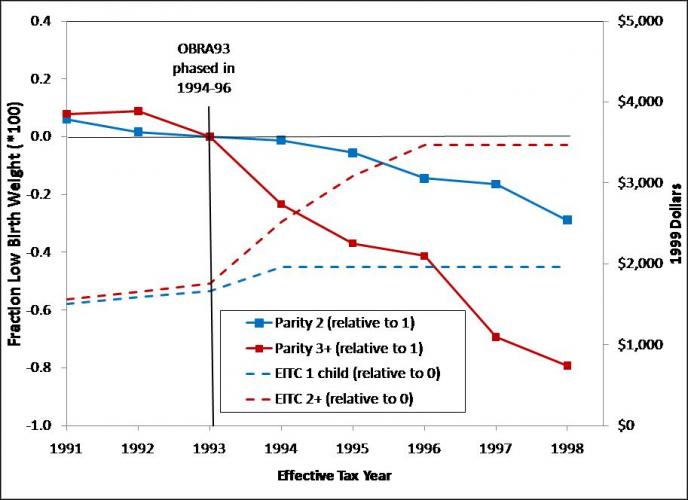 Individual states have built on the federal model. Twenty-three states and the District of Columbia have EITC’s that supplement the federal tax credit at rates that range from 3.5 percent of the federal rate in Louisiana to up to 50 percent in Maryland. In 2013, six states are considering either establishing an EITC or altering ones they currently have.

While the EITC is not a health program, the authors find that the increased in income leads to improvements in birth weights that are comparable with impacts found with food assistance programs like SNAP and WIC. Birth weight is important beyond being a standard measure of infant health. Incidences of low birth weight are especially important predictors of adult health as well as the economic outcomes that are the EITC’s primary concern.

Income and Newborn Health
To date, this recent Center for Poverty Research-affiliate study is the only one to examine how EITC income affects low birth weights  across specific demographic groups, and to confirm its findings across multiple EITC expansions.

Researchers began their in-depth analysis of the 1993 EITC expansion with data from U.S. Vital Statistics, which provided birth weight records as well as demographic information on mothers that included age, race, ethnicity, education, and marital status, as well as the number births they have had. With this information, researchers charted the overall impact each of the phased-in increases in EITC income had on low birth weight across demographic groups.

To figure out dollar-for-dollar effects between different demographic groups, researchers used Current Population Survey (CPS) data in conjunction with the TAXSIM tax liability estimating tool from the National Bureau of Economic Research with these additional data sets, researchers calculated the average change in EITC eligibility and payments from year to year, and with each additional child.

To confirm their findings, researchers then applied their model to EITC expansions in 1986 and 1990. Compared to the 1993 expansion, the impacts on low birth weight were effectively the same.

Demographic groups that showed the most significant improvements had greater increases in EITC income, greater socioeconomic risk, or both. Researchers also found that after the 1993 expansion, decreases in the number of low birth weight births grew over time. This is consistent with the phased-in nature of that legislated expansion.

The High-Impact Demographic
Researchers focused their analysis on a high-impact demographic that is most affected by additional EITC earnings. This group consisted of single women between the ages of 18-45 with less than a high school education. For the 1998 tax year, about 42 percent of those who gave birth in this group were eligible for the EITC.

Even including those who may not have received the EITC, the 1993 expansion reduced rates of low birth weight across this demographic for second-born infants by two percent and for third and subsequent births by five percent. Among African Americans it reduced the likelihood of low birth weight for all births by five percent, and for the third and subsequent births by 10 percent.

Making the Connections
While the EITC has an overall effect of driving down rates of low birth weight, the mechanisms for this connection are complex. The study uses multiple tests to control for external factors that include pre-existing trends, expansions in Medicaid, welfare reform and variations in state EITCs and unemployment rates.

Researchers did find a pathway from increases in prenatal care and reductions in smoking to improved infant health. Pre-natal care, and its regular contact with doctors during pregnancy, could also be how EITC income also was associated with lower rates of smoking and drinking during pregnancy.

References:
Almond, Douglas, Hilary Hoynes and Diane Schanzenbach. “Inside the War on Poverty: The Impact of the Food Stamp Program on Birth Outcomes.” Review of Economics and Statistics, 2011. 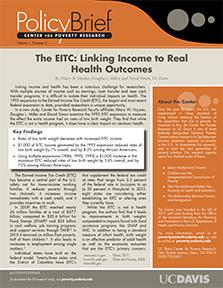