The Impacts of Gender and Income on Career and Technical Education by Mary Cashen, 2012 Visiting Graduate Scholar

For decades, high school students have taken technical training classes that prepare them for jobs, but little research has examined the impact these classes have on whether those students go to college.

In a new study, Center for Poverty Research 2012 Visiting Graduate scholar Mary Cashen finds that both family income and gender predict which students are more likely to complete high school Career and Technical Education (CTE) courses, as well as which will pursue a two- or four-year degree.

President Barack Obama’s Career and Technical Education Blueprint makes it imperative that “every student in our country graduates from high school prepared for college and a successful career.”1 However, by October of 2011, only 68 percent of 2011 high school graduates were enrolled in a college or university.

Proponents of high school career and technical education (CTE) argue that its value should not be judged in terms of whether or not they increase the chances an academically weak student will attain a college degree. Career training in high school can prepare students for jobs in a range of fields, including business, computer and information sciences and construction.

Over 95 percent of high school students took at least one CTE course in 2000, and approximately one fourth took three or more courses in the same CTE concentration.4 American high schools students continue to complete CTE courses, which makes it imperative to understand the consequences they have on later education attainment and earnings.

The Data on Career and Technical Training
This study focuses on outlooks for career and technical education (CTE) in U.S. high schools in the 21st century. It analyzes CTE course-taking patterns for male and female students from different socioeconomic backgrounds, and strives to make conclusions about what policies would improve high school curriculum for those students who are least likely to complete college.

This study uses data from the Educational Longitudinal Study of 2002 (ELS: 2002), a nationally representative dataset of high school sophomores in 2002, as well as a second and third wave of data collection in 2004 and 2006. Analyses were conducted only for non-private school students for whom complete high school transcript data was available. 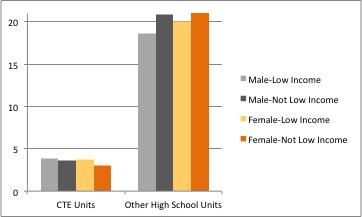 Gendered Courses of Study
The results indicate that young women complete significantly more family and consumer science education, business and office, allied health and health sciences and vocational home economics units than their male counterparts. This is consistent with previous research. Males from low-income families, and those with parents without college degrees, are less likely to participate in female-dominated vocational courses. Males from families with higher income, and whose parents have a higher level of education, are not as deterred. 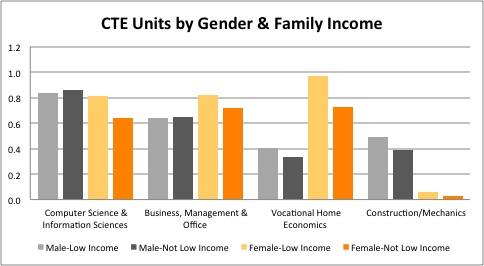 Meet the Researcher
Mary Ellen Cashen is a Ph.D. candidate in Educational Policy and Social Context at UC Irvine. She studies high schools, career and technical education, poverty, inequality and gender differences in labor-market outcomes for low-income students. Contact her at: mcashen@uci.edu.

About the Visiting Graduate Scholars Program
Each year, the Center hosts Ph.D. students from across the country as Visiting Graduate Scholars to conduct poverty research in a variety of disciplines, including economics, psychology, sociology, social work, public policy, law and education. Their coursework and research during their stay expands their understanding of the causes and consequences of poverty, and offers faculty mentorship and support in their work.

References
Arum, Richard, and Yossi Shavit. 1995. “Secondary Vocational Education and the Transition from School to Work.” Sociology of Education 68:187-204.

Mary has completed her third year in the Educational Policy and Social Context program at Irvine. Her dissertation research focuses on issues of access and equity for marginalized youth in the transition from high school to college or the workforce.