In recent years, for-profit colleges have seen sharp increases in enrollment despite public community colleges being much cheaper. In a recent study,[1] we sent almost 9,000 fictitious resumes of young job applicants who recently completed their schooling to online job postings in seven major U.S. cities across six occupational categories to track employer callback rates. We find no evidence that employers prefer applicants with resumes listing a for-profit college relative to those whose resumes list either a public community college or no college at all.

The growth of the for-profit sector over the past 20 years is one of the most striking developments in the United States market for higher education. Today, the share of college students enrolled in for-profits stands at approximately 11 percent.[2]

The growth in for-profit enrollments may be due to their claim that they provide programs that will lead to a better chance of success in the labor market than those at public community colleges. For-profits put more resources into student advising, career counseling and job placement than public community colleges.[6] They also offer flexible schedules and online classes and support. 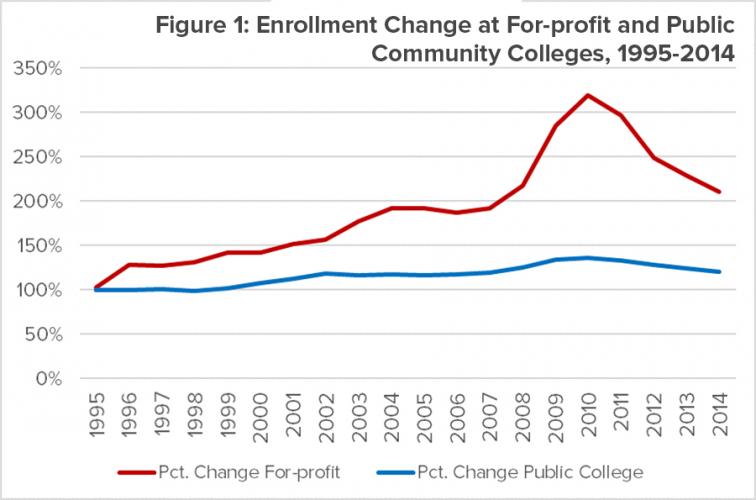 For-profit students also disproportionately come from low-income backgrounds compared to public or even private non-profit schools. Average Pell Grants per student (federal grants available to those who meet a low-income criteria) were $2,370 for students at for-profit institutions, compared to $759 at two-year public colleges.

We conducted a field experiment to see if employers prefer job applicants who attended for-profit colleges. Between May 2013 and May 2014, we sent resumes for fictitious job applicants, with randomly assigned postsecondary educations, to job postings in seven major cities: Atlanta, Boston, Chicago, Houston, Philadelphia, Sacramento and Seattle. We selected for-profit colleges and public community colleges that were local to each city. We had 8,914 resumes in our analytic sample.

Jobs included administrative assisting, customer service, information technology, medical assisting (excluding nursing), medical billing/office and sales. The resumes included entry level jobs and low skilled jobs. All of the resumes were sent to jobs for which the fictional applicant would be qualified. The overall response rate was 11.4 percent. Of all applicants, 4.9 percent received an interview request.

While our main comparison was responses to for-profit and public community college degrees, we also compared responses to resumes that did not listing a postsecondary education at all. The work history listed in the applicants’ resumes reflected real resumes posted by those applying to jobs online. Some of our fictional resumes also included work history gaps to reflect real applicants. The resumes also included a variety of names suggesting different genders and ethnicities.

Controlling for all variables not related to educational experience—including city, industry, suggested gender, ethnicity and other external factors—we find no indication that listing a for-profit college increases employer interest compared with listing a public community college.

In fact, all point estimates suggest employers prefer applicants from community colleges, though none were statistically significant. We also find no evidence that job applicants benefit from attending a for-profit college compared to high-school graduates listing no post-secondary education. However, the point estimates are all small and statistically insignificant.

While for-profit college students are more likely to complete a program than their community college counterparts, we find no payoff to completing an associate’s degree compared with having a vocational certificate or not having any certificate or degree. Though our study did not examine other labor market outcomes, such as wages, this finding suggests that attending a for-profit college does not have immediate benefits when new graduates first apply for jobs.

We also find that employers do not have more interest in applicants who list for-profit colleges than applicants who only have a high school diploma. These findings suggest that neither a for-profit or community college degree have a large immediate labor market payoff.

Our findings show no support for the claim that for-profit colleges make about their programs, that they are better suited to prepare individuals to be successful in the labor market. With this is mind, the large amount of funding from tax-payer money to these schools may need to be reconsidered.

Paco Martorell is an Assistant Professor of Education at UC Davis.

Rajeev Darolia is an Assistant Professor of Educational Leadership & Policy Analysis at the University of Missouri Harry S Truman School of Public Affairs.

Cory Koedel is an Associate Professor of Economics and Public Policy University of Missouri.

Katie Wilson is a Ph.D. candidate at the Pardee RAND Graduate School.

Francisco Perez-Arce is an economist and Professor at the Pardee RAND Graduate School, and Director of the Center for Latin America Social Policy. 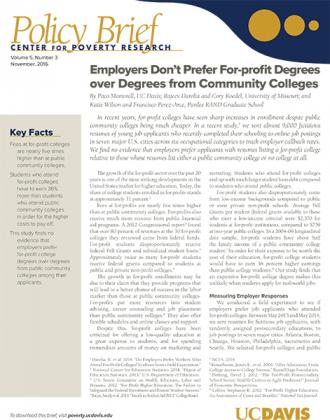 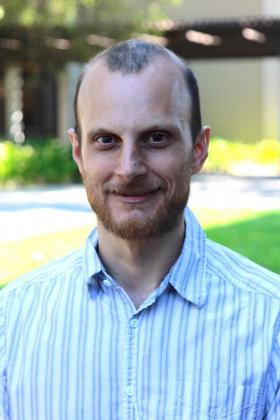 Paco Martorell is an Associate Professor in the UC Davis School of Education. Martorell completed his PhD in economics at UC Berkeley.