The EITC Does Not Automatically Stabilize Income for All in a Recession by Marianne Bitler, UC Irvine; Hilary Hoynes, UC Berkeley and Elira Kuka, UC Davis

Some safety net programs, such as unemployment insurance (UI) and food stamps (SNAP), have shown to automatically stabilize income during financial downturns. The Earned Income Tax Credit (EITC) raises millions of American workers out of poverty, but its impact in times of crisis has not been explored.

A new study by Research Affiliates Marianne Bitler, Hilary Hoynes and Elira Kuka finds that during the Great Recession the EITC did help two-income households suffering a job loss, but it did not help single parents who were out of work.

The Earned Income Tax Credit (EITC) provides earnings to lower-income workers through the tax system. As an “in-work” program, positive earnings are required for eligibility. Since legislated expansions to the EITC and the dismantling of welfare since 1996, it is now the most important cash program for families in need.  In 2013, the EITC reached over 27 million earners with over $63 billion in tax credits.

One feature of a safety net program is that it raises incomes for low earners, which the EITC does. A recent U.S. Census Bureau release showed that in 2012 the only government program that lifts more people out of poverty is Social Security.

A second key feature of safety net programs is that they provide protection during times of need. These programs  can help mitigate the shock of a lost job and income. This aspect of the EITC was the focus of this study. The Great Recession in the U.S., which lasted from December 2007 through June 2009, provides the first opportunity to test this central element of a U.S. safety net that today is tied to  employment.

The Great Recession and the EITC
This study evaluated whether the EITC satisfies a central tenet of safety net programs by providing stability during times of financial need. Throughout the Great Recession, as was true during earlier cyclical periods, its timing and severity varied significantly across states. The study compared that variation in state unemployment rates to EITC claims.

Researchers used micro data from the IRS Statistics of Income covering 1996-08 (2008 was the last year for which SOI microdata was available; results below are based on IRS SOI data). to estimate the relationship between economic cycles and the size of the federal EITC program, both in terms of the numbers filing for the credit and the dollars distributed. Summary data on EITC claims by state and filing status for 2009-10 showed similar results. 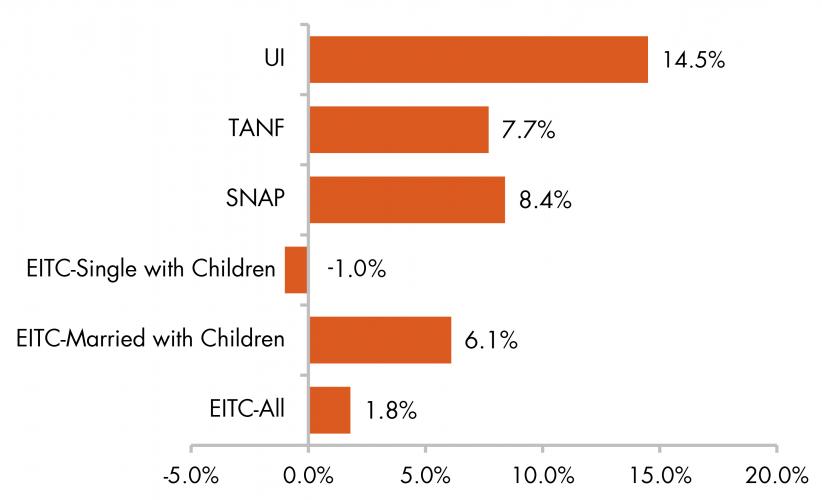 Families and Individuals with Children
A one percentage point increase in the state unemployment rate leads to a 1.8 percent increase in the total number of EITC claims. However, these effects vary substantially across demographic groups.

Among married couples with children, filings for the EITC rise during economic downturns. This study’s estimates suggest that for this group a one percentage point increase in the unemployment rate leads to a 6.1 percent increase in claims. This suggests that for married couples, the loss of one income pushes them beneath the threshold needed to qualify for higher EITC income.

Among single filers without children—who are eligible for a much smaller credit and represent less than five percent of the program’s total costs—a one percentage point increase in the unemployment rate leads to a 3.2 percent increase in EITC claims.

Single parents find the least benefit during economic downturns. The analysis showed that EITC filings among single-parent families decreased by one percent. This finding is especially important given that single parents represent nearly 60 percent of EITC filers, who receive almost three-quarters of all EITC dollars.

The EITC in Context
Only a relatively small share of working single parents have incomes above the EITC phase-out range. This means that the loss of earnings will either have no change in EITC eligibility, or loss of eligibility entirely in the case of a lost job and no earnings for the entire tax year.

On the other hand, more than half of married couples with children have incomes above the point at which their EITC credit starts to phase out. This means that a loss of income would more likely increase their EITC eligibility and income. Also, with two potential earners in the household, it is less likely that a job loss for one parent would reduce the family income to zero.

To put the EITC’s responsiveness in context, the researchers compared the EITC results to key safety net programs including Unemployment Insurance (UI), Food Stamps (SNAP) and TANF. During the same time period, a one percentage point increase in the unemployment rate led to an increase in caseloads of 14.5 percent for UI, 8.4 percent for SNAP, and 7.7 percent for TANF, compared to 1.8 percent for the EITC.

These results are valuable for several reasons. The Great Recession is the first “test” of our safety net in the post-welfare reform era. Welfare reform has led to a movement away from “out of work” benefits that carry with them strong work disincentives, and toward an increase in “in work” benefits which promote employment. As many developed countries adopt similar in-work policies, understanding the effect of business cycles on in-work programs is fundamental for policy makers’ decision making and budget planning.

Meet the Researchers
Marianne Bitler is a Professor of Economics at UC Irvine. Her research interests include Labor, Health and Public Economics.

Hilary Hoynes is a Professor of Public Policy and Economics at UC Berkeley and holds the Haas Distinguished Chair in Economic Disparities.

Elira Kuka is a Ph.D. candidate in Economics at UC Davis. Her work has focused on analyzing different aspects of the Earned Income Tax Credit, such as program noncompliance and program cyclicality.

References
Bitler, M. and H. Hoynes (2010).”The State of the Safety Net in the Post-Welfare Reform Era.” Brookings Papers on Economic Activity: 71-127. 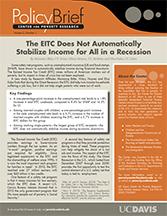