Deportees Will Risk Harsh Penalties to Return to Families in the U.S. By Erin R. Hamilton, UC Davis

Despite significant efforts to deter unauthorized immigration, repeat migration to the United States following deportation is common. In a new study, my co-authors and I examined how having family in the U.S. affects the intent to return among migrants deported to El Salvador. We found that being separated from their families in the U.S. is the most important factor in the intent to return, even despite the severe penalties if caught.

In the two-year period between July 2010 and September 2012, the U.S. Department of Homeland Security deported 204,810 parents of U.S.-citizen children, who made up one-fourth of all removals.[2] In 2013, the U.S. Immigration and Customs Enforcement agency deported 72,000 parents of children who are U.S. citizens.

Deported parents face no good solutions to forced separation from their children. To keep their families intact, these parents must choose either to take their children with them or to leave them behind and risk harsh penalties in attempts to return.

Department of Homeland Security (DHS) data show that while 21 percent of all deportees in the U.S. are caught and deported multiple times, and this is true for more than a third of those with children who are U.S. citizens.[3] These data are limited to those apprehended and may therefore undercount repeat migration.

Those who return after deportation face harsh penalties if caught. A second illegal-entry violation is a felony subject to up to two years in prison. With a criminal record, the penalty can be up to 20 years in prison, depending on the prior conviction. Criminal penalties also mean that the vast majority of repeat violators will not qualify for legal status. Our study finds that the majority of deported parents will still risk these penalties to reunite with their families in the U.S.

Deportees Returning to El Salvador
The data for our study come from a survey of deportees conducted by the Salvadoran deportee-reintegration program, “Bienvenido a Casa” (“Welcome Home,” or BAC). The data include the location of spouses and children and the deportees’ intention to return to the U.S. Our analysis is based on a sample of 186 cases.

Fathers with Families in the U.S.
Our study finds that being apart from families in the U.S. is the most significant factor influencing the deportees’ intent to return. Among deportees with children in the U.S., the majority (89.1%) had at least one child who is a U.S. citizen. A majority were also separated from a spouse (62.4%).

We found that deportees with children in the U.S. have greater U.S.-specific human capital than deportees without them. They have spent, on average, six years longer in the U.S. prior to deportation, were more likely to be employed and to speak English. These factors may motivate deportees to return, but our results showed that these factors were not significantly associated with the intent to return, whereas family was.

We examined whether family structure mattered for deportees who were deported for criminal offenses. We find that even among those with criminal records, deportees with a spouse and dependent child are four times more likely to intend to return than those without families in the U.S., despite the serious penalties if caught.

Estimates on How Many Will Return
Research shows that the intention to migrate strongly predicts actual migration. Prior studies have found that from 45 to 75 percent of those who intend to migrate actually do.[4]

Using this prior work in conjunction with results from our study and DHS data on deportations, we estimate that out of the 9,346 Salvadoran parents deported in 2011, between 2,208 and 3,679 will actually return. Applying this same logic to all 79,052 parents of U.S.-citizen children deported in 2011, between 18,676 and 31,126 will return without documentation to rejoin their families.

The actual number could be much larger. Studies of Central American and Mexican transnational families show that remigration is more common among Mexicans than Central Americans.[5]  Remigration is easier from Mexico because of the shorter distance and a history of circular migration between Mexico and the U.S. By far the majority of deportees are Mexican immigrants.

Rethinking Penalties for Re-entry
Our study raises questions about the logic and cost-effectiveness of deporting parents who have children in the U.S., especially given the psychological and financial consequences of deportation on families.[6] In addition to these consequences, immigration detention and removal operations cost roughly $2.9 billion annually.[7]

Harsh penalties designed to deter re-entry, even for deportees with criminal records, clearly do not work when families are involved. Further steps to reduce the deportation of parents of U.S. citizen children, as in providing greater prosecutorial and judicial discretion in deportation hearings, should be considered.

Erin Hamilton is an assistant professor in the Department of Sociology at UC Davis.

[6] Dreby, 2012. “The Burden of Deportation on Children in Mexican Immigrant Families.” Journal of Marriage and Family.

Download Brief on Deportees Returning to their U.S. Families 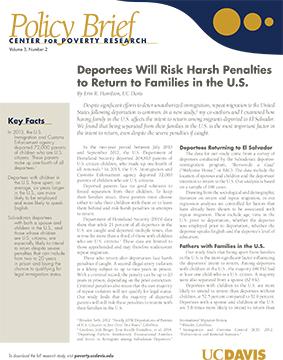