In July 2013, California Governor Jerry Brown overhauled the state’s school finance system, which has long been criticized for its complexity and failure to meet student needs. The prior system generally did provide more revenues to districts serving many disadvantaged students, but the new Local Control Funding Formula (LCFF) dramatically increases the state’s investment in those districts, and creates a more transparent and equitable school finance system.

Under the old system, school districts received funds from four main sources: a “revenue limit” for general purposes financed by property taxes and state aid; local revenues such as parcel taxes; state categorical aid from about 80 programs for special purposes like special education or gifted and talented education (GATE); and federal aid supporting programs like the National School Lunch Program and Title I.

Despite these additional funds, proficiency rates and Academic Performance Index ratings in low-income districts remained much lower than in more affluent districts. This achievement gap, as well as the lack of clear reasons for the funding differences, prompted Governor Brown to propose the Local Control Funding Formula (LCFF).

The Local Control Funding Formula
The LCFF consolidates revenue limits and the majority of state categorical programs into a new statewide formula that provides base funding for students statewide, with additional funding for disadvantaged students. Districts in which more than 55 percent of the students are disadvantaged would receive even more funding through a concentration grant. The LCFF defines disadvantaged students as low-income based on eligibility for free or reduced-price lunch, English learners and foster youth.

The LCFF’s base rates average $7,650 per pupil. Disadvantaged students generate an additional 20 percent of the base (about $1,530 per pupil). In districts with more than 55 percent disadvantaged students, each additional student generates an extra 50 percent of the base (about $3,820 per pupil). Two large categorical programs for pupil transportation and desegregation remain as a general purpose add-on, meaning those funds are considered part of the LCFF but can now be spent for any educational purpose. 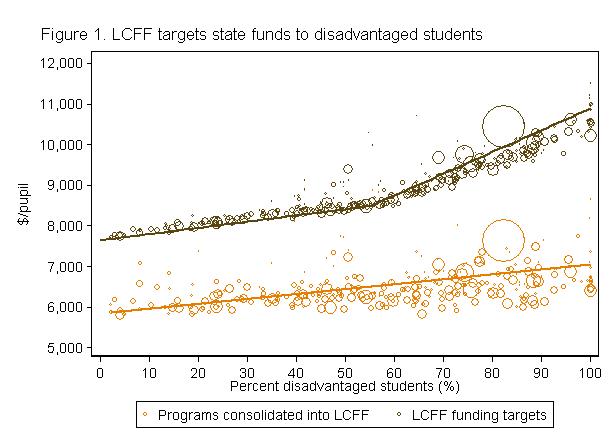 Comparing the Two Systems
Figure 1 shows the distribution of revenue by disadvantaged students under the old school funding system and under full implementation of the LCFF. The steepness of the line shows the change in funding as the fraction of disadvantaged students in a district increases. The distance between the bubbles and the line shows funding variation between districts.

Considering the additional state, federal, and local funds that are not part of the LCFF, the average difference in total funding per pupil between a district with all disadvantaged students and a district with none will be about 56 percent.

Conclusion
California is among a growing number of states adopting formulas that direct more revenue to disadvantaged students. However, unlike in other states, where the majority of revenue is raised locally, the vast majority of California school revenue is controlled by the state. Even local property taxes are determined by the Proposition 13, which gives school districts few options to increase or control their funding.

The state cannot afford to meet the LCFF targets this year, so the formula is expected to be phased-in over the next eight years using new revenues from Proposition 30 (2012) and an improving state economy. Once fully implemented, all districts are guaranteed to at least return to their pre-recession levels.3 Other states will be watching as California implements such a pronounced policy change.

Meet the Researchers
Healther Rose is an Associate Professor at the University of California at Davis. Her research interests focus on school finance policy, how math curriculum relates to students’ future test scores and earnings, and affirmative action policies in higher education.

Margaret Weston is pursuing a Ph.D. in education policy at UC Davis. She is also a Research Fellow at the Public Policy Institute of California.

Note: In approximately 20% of districts, the LCFF target is lower than what that school district would have received under the old formula. To address this, the LCFF creates an “economic recovery target” to ensure that funding in these districts increases to at least to pre-recession levels, capped at $14,500 per pupil.

Graph data note: Excludes 20 districts (serving approximately 10,400 students) with current funds greater than $12,000 per pupil and 4 districts (serving approximately 300 students) with projected LCFF funds greater than $12,000 per pupil. Average relationship is weighted by district size. The estimate the percent disadvantaged students as defined in statute is based on a sum of the percent of students on free or reduced price lunch and 25% of the English learners. This estimate is based on testimony from the Department of Finance (February 16, 2012) to the Senate Standing Committee on Budget and Fiscal Review that 75% of English learners also qualify for free and reduced price lunch. 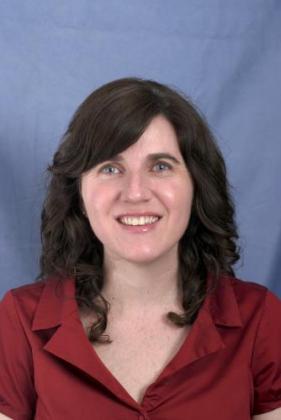