Direct health care support and personal care jobs have the largest projected growth in the next decade. Immigrants make up growing percentages of workers in these fields, and having a better understanding of their range of experiences in these occupations will help attract and retain them. My new research finds that African immigrant direct health care workers often experience prejudice based on both their race and African backgrounds. They also see their jobs as lacking opportunities for advancement, and often struggle to meet basic needs with their incomes.

According to the 2008–12 American Community Survey (ACS), 1.6 million African immigrants live in the U.S. They represent four percent of the foreign-born population, but since 2000, the number of African immigrants increased by over 700,000 persons, up from  881,300.

This project uses qualitative interviews to explore the entry, everyday experiences, occupational mobility and poverty status of African immigrants in low-wage direct care occupations. I find that many African immigrants struggle to meet basic needs and face challenges from racial prejudice and their immigration status.

This study is based on 30 interviews with west African immigrants in low-wage health care jobs within the Greater Pittsburgh area. They were between 22 and 53 years old, with a median age of 32. They had lived in the U.S. for a median of eight years. Overall they had high levels of education, with 37 percent having completed some college, 30 percent having a two- or four-year degree, and 17 percent having Master’s degrees. About half were permanent residents (green card holders), 37 percent were U.S. citizens and ten percent were either undocumented or had some other status.

Their median pay was $12 per hour. Half of the participants gave their current job titles of certified nursing assistants or aides, while the rest described their jobs as home care aide, medical technician, direct care specialist and residential advisor. Most of the interviewees worked with elderly patients or clients.

Why Do Direct Care Work?

When asked about their reasons for doing direct care work, more than half (57%) indicated that they liked doing care work. Fatu,[5] a woman from West Africa working as a personal care assistant said, “…it’s like basically looking out for your elders you know, they’ve looked out for you and it’s your turn…That’s how you take care of community so that’s stuck with me and it’s just something I love to do.”

Nearly half of the interviewees (43%) said that they experienced difficulty paying their bills. Several explained that although they could pay their bills, there was nothing left over. To cope with financial challenges, more than half said they would turn to a spouse or family members, about a third would turn to friends, and ten percent would turn to state sources, local agencies or their churches. None indicated using their home country associations for financial help.

Although these workers earn more than the minimum wage, they are often not able to meet basic needs. A third (33%) reported having no health insurance. At least half reported having more than one job, working a lot of overtime or making extra money selling goods and/or services (i.e. hair braiding).

Dynamics on the Job

The overwhelming majority of the respondents see their current jobs in low wage direct care as transitional jobs. Nearly all (93%) indicated wanting to move to another career, mainly as LPNs, RNs, or Physician’s Assistants or into other fields such as business and information technology.

Although most respondents (83%) were either very or somewhat satisfied with their jobs, there was a split regarding advancement or occupational mobility. Only about half (47%) indicated that there were opportunities for advancement, primarily through employer tuition reimbursement to become LPNs or RNs.

When asked about the hardest aspects of their jobs, many (40%) discussed the need for patience. Other recurring themes include covering the work load of absent co-workers, cleaning excrement, physical demands of the job, working night shifts, and dealing with rude or demanding family members of residents.

For many, the fact that they were black affected how they were treated by residents and staff. More than half (57%) indicated that they had experienced racial problems with residents or their families, with co-workers or with supervisors. These include name calling and physical assaults by residents, often from those having dementia.

Some residents and family members were sometimes curious about their lives in Africa. Others—both white and black residents, clients and staff members— saw their African backgrounds negatively. Arlette, a nursing home CNA from Cameroon, said, “One of the residents always calls me blackie, nigger…the first week I was shocked but now I’m used to it… Some call you slave.”

Yolanda Covington-Ward is an Assistant Professor of Africana Studies at the University of Pittsburgh. This project was funded in part by a Center for Poverty Research Small Grant.

[5] All names in this brief are pseudonyms. 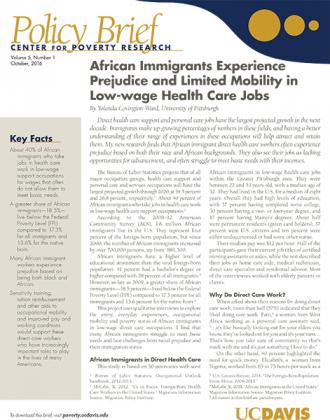 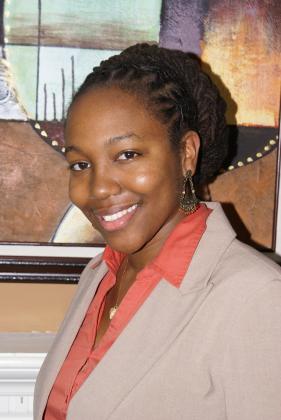 Dr. Yolanda Denise Covington-Ward is an Assistant Professor of Africana Studies and an affiliated faculty member in the Department of Anthropology, Global Studies Center, African Studies and Gender, Sexuality, and Women’s Studies Programs at the University of Pittsburgh.