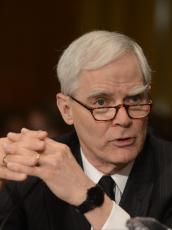 Ron Haskins is a Senior Fellow and holds the Cabot Family Chair in Economic Studies at the Brookings Institution, where he co-directs the Center on Children and Families. He is also a senior consultant at the Annie E. Casey Foundation and was the President of the Association for Public Policy Analysis and Management in 2016. Haskins is the co-author of Show Me the Evidence: Obama’s Fight for Rigor and Evidence in Social Policy (2015) and the author of Work over Welfare: The Inside Story of the 1996 Welfare Reform Law (2006). Beginning in 1986, he spent 14 years on the staff of the House Ways and Means Committee and was subsequently appointed to be the Senior Advisor to President Bush for Welfare Policy. In 1997, Haskins was selected by the National Journal as one of the 100 most influential people in the federal government.  He and his colleague Isabel Sawhill were recently awarded the Moynihan Prize by the American Academy of Political and Social Science for being champions of the public good and advocates for public policy based on social science research. Haskins was recently appointed by Speaker Paul Ryan to co-chair the Evidence-Based Policymaking Commission.