Ron Haskins: Fighting Child Poverty: Spending So Much, Getting So Little Co-director, Brookings Center on Children and Families and the Budgeting for National Priorities Project 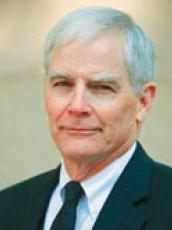 The Center is pleased to welcome our Winter Distinguished Visiting Scholar, Dr. Ron Haskins, February 20-22, 2013. An expert on preschool, foster care, and poverty, Dr. Haskins was instrumental in the 1996 overhaul of national welfare policy. His areas of expertise include welfare reform, child care, child support enforcement, family composition and marriage, and child protection. He holds a Bachelor’s degree in History, a Master’s in Education, and a Ph.D. in Developmental Psychology, from UNC, Chapel Hill.

Dr. Haskins is a former White House and congressional advisor on welfare issues, and co-directs the Brookings Center on Children and Families and its Budgeting for National Priorities Project. He is also a senior consultant at the Annie E. Casey Foundation.  Prior to joining Brookings and Casey, he spent 14 years on the staff of the House Ways and Means Human Resources Subcommittee, first as welfare counsel to the Republican staff, then as the subcommittee’s staff director. From 1981-1985, he was a senior researcher at the Frank Porter Graham Child Development Center at the University of North Carolina, Chapel Hill. He also taught and lectured on history and education at UNC, Charlotte and developmental psychology at Duke University.

Haskins was the editor of the 1996, 1998, and 2000 editions of the Green Book, a 1600-page compendium of the nation’s social programs published by the House Ways and Means Committee that analyzes domestic policy issues including health care, poverty, and unemployment.

Haskins is a senior editor of The Future of Children, a journal on policy issues that affect children and families. He has also co-edited several books, including Welfare Reform and Beyond: The Future of the Safety Net (2002) and The New World of Welfare (2001), and is a contributor to numerous books and scholarly journals on children’s development and social policy issues. He is also the author of Work over Welfare: The Inside Story of the 1996 Welfare Reform Law (2006). He has written articles and editorials that have appeared in several newspapers and periodicals including the Washington Post, New York Times, Wall Street Journal, Policy Review, State Government News, and American Enterprise.