‘I am more than just papers’: Healing in the Face of Legal Violence Leisy Abrego, UCLA
Co-sponsor of the Department of Sociology Spring Lecture Series 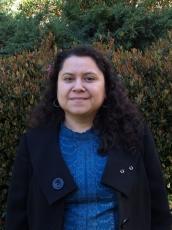 Leisy J. Abrego is a Professor in Chicana/o Studies at UCLA. She is a member of the first large wave of Salvadoran immigrants who arrived in Los Angeles in the early 1980s.

Her research and teaching interests—inspired in great part by her family’s experiences—are in Central American immigration, Latina/o families, the inequalities created by gender, and the production of “illegality” through U.S. immigration laws. Her award-winning first book,Sacrificing Families: Navigating Laws, Labor, and Love Across Borders(Stanford University Press, 2014), examines the well-being of Salvadoran immigrants and their families—both in the United States and in El Salvador—as these are shaped by immigration policies and gendered expectations. Her early research examines how immigration and educational policies shape the educational trajectories of undocumented students. Her second book,Immigrant Families (Polity Press, 2016), is co-authored with Cecilia Menjívar and Leah Schmalzbauer and delves deeply into the structural conditions contextualizing the diverse experiences of contemporary immigrant families in the United States. More recently, Abrego has been writing about how different subsectors of Latino immigrants internalize immigration policies differently and how this shapes their willingness to make claims in the United States. Her current project examines the day-to-day lives of mixed status families after DACA. Her scholarship analyzing legal consciousness, illegality, and legal violence has garnered numerous national awards. She also dedicates much of her time to supporting and advocating for refugees and immigrants by writing editorials and pro-bono expert declarations in asylum cases.